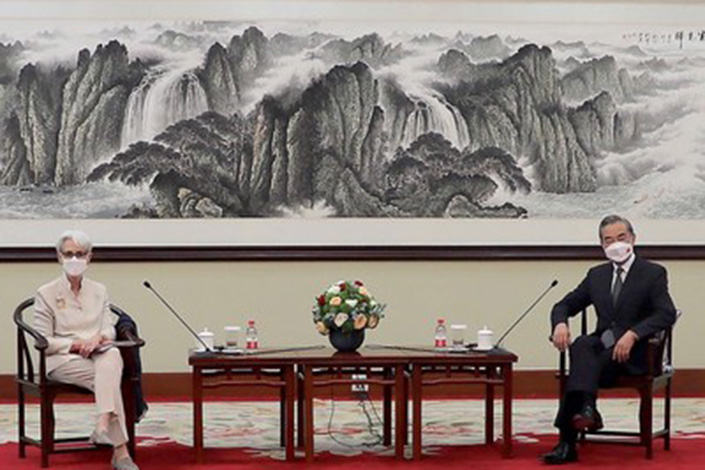 China’s Foreign Minister Wang Yi meets with U.S. Deputy Secretary of State Sherman in Tianjin on the afternoon of July 26. Photo: The Paper

Since U.S. President Joe Biden took office in January, China and the U.S. have been making efforts to reengage and recalibrate their diplomatic relationship after four years of turbulence with the former U.S. administration.

At the high-level meeting in Alaska in March, the two sides failed to reach agreement on how to get their bilateral relations back on track. Since then, Beijing and Washington have each insisted on their own approach to reengagement.

In a March speech, Secretary of State Anthony Blinken said that the U.S.’ relationship with China “will be competitive when it should be, collaborative when it can be, and adversarial when it must be,” adding that “the common denominator is the need to engage China from a position of strength.”

In an early February speech, China’s highest ranking diplomat Yang Jiechi, a Politburo member, said the new U.S. government should abandon “misguided policies” that view China as a “strategic competitor or adversary” and work with Beijing to bring bilateral relations back onto a “predictable and constructive” track.

Beijing gradually developed detailed principles for dealing with the Biden administration into “three bottom lines” of the relationship and “two lists” of demands ― which were fully articulated in July during Deputy Secretary Of State Wendy Sherman’s visit to China ― that Beijing believed would set the stage for bringing ties back on track.

“The United States should carry out coordination and cooperation at bilateral, regional and global levels, based on the principles of mutual respect, equality and mutual benefit, instead of one-way traffic,” Wang said.

• The United States must not challenge, slander or attempt to subvert the path and system of socialism with Chinese characteristics.

Chosen by history and the Chinese people, China’s path and system are matters of the welfare of 1.4 billion Chinese people and the future of the Chinese nation, as well as core interests that China must firmly uphold.

• The United States must not attempt to obstruct or interrupt China’s development process.

China urges the United States to remove all unilateral sanctions, high tariffs, long-arm jurisdiction and technology blockades it has imposed on China as soon as possible.

• The United States must not infringe upon China’s state sovereignty, or damage China’s territorial integrity.

The issues regarding Xinjiang, Tibet and Hong Kong have never been about “human rights” or “democracy”, but about fighting against “Xinjiang independence,” “Tibetan independence” and “Hong Kong independence.”

China’s vice foreign minister Xie Feng also put forward two lists during his meeting with Sherman in July, including a list of U.S. wrongdoings and a list of key individual cases over which Beijing expressed serious concerns. According to the official Xinhua News Agency, the two lists of demands include:

China urged the United States to address those cases as soon as possible and earnestly respect and protect the legitimate interests of Chinese citizens and institutions in the United States, Xie said.