CX Daily: How China Won Its 70-Year Battle With Malaria 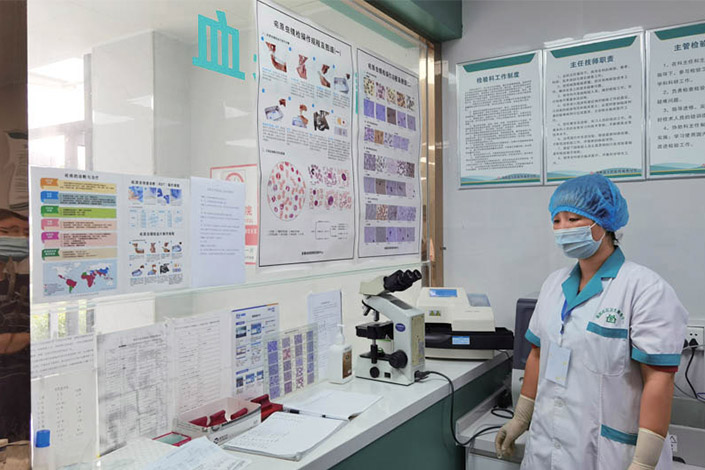 In Bozhou, East China’s Anhui province, a medical worker stands in a hospital laboratory, where microscopic examination of a parasite that potentially causes malaria in humans can be carried out. Photo: Ma Danmeng/Caixin

In Depth: How China won its 70-year battle with malaria

On June 30, China was certified malaria-free by the World Health Organization (WHO), crowning the success of a 70-year disease control effort.

So far, only 40 countries and regions in the world have been granted the certification, and in the WHO Western Pacific Region, China is the first country to be certified in more than three decades.

To finally stamp out the disease, the country devoted resources to developing new treatments and developed targeted strategies to stop outbreaks as soon as they appear. These decades of work have provided experience that can help countries still struggling with their own persistent malaria problems.

E-commerce businesses like Alibaba and Pinduoduo would lose their trading licenses if they continue to flout intellectual property rules under a legal amendment being reviewed by Chinese policymakers.

The companies will also face other restrictions if they ignore serious intellectual property (IP) violations by vendors that use their platforms, according to a revised draft (in Chinese) of China’s E-Commerce Law which took effect in 2019. The draft is under review until Oct. 14.

The Caixin China General Manufacturing Purchasing Managers’ Index (PMI), which gives an independent snapshot of the country’s manufacturing sector, fell to 49.2 in August from 50.3 the previous month, according to the survey report released Wednesday. Readings of less than 50 indicate contraction.

August’s reading was the lowest since February last year, when large swathes of the country shut down their economic activity due to Covid-19.

The Chinese Communist Party set a plenary session for November to discuss the “major achievements and historical experience of the party in the past century,” state media Xinhua News Agency said.

The decision to hold the sixth plenary session of the 19th Central Committee was made Tuesday at a meeting of the party’s Politburo, China’s top decision-making body, chaired by President Xi Jinping, Xinhua said. An exact date was not given.

Industrial and Commercial Bank of China Ltd. (ICBC), the world’s largest commercial bank by assets, is set to name Zheng Guoyu as a new vice president, sources with knowledge of the issue told Caixin.

Zheng, a former vice president at Bank of China Ltd., was appointed a member of the Communist Party committee of ICBC and will take the position of vice president following administrative procedures, the sources said.

China’s tech giants are under increasing public pressure over grueling, long-hours schedules, which were blamed for several deaths of young employees. At the same time, some ByteDance workers are concerned about the loss of income.

China’s market regulator issued guidelines on how to certify products compatible with the BeiDou Navigation Satellite System as Beijing aims to use its homegrown GPS alternative in everything from smart vehicles to consumer electronics.

The guidelines (link in Chinese), published Friday by the State Administration of Market Regulation (SAMR), come a year after China launched the final satellite of the BeiDou network, enabling the system to provide global users with services ranging from positioning and navigation to global short-message communication and international search and rescue assistance.

China’s education authorities tightened oversight of local governments, schools and educational institutions with a new set of rules to enforce national policies amid a regulatory storm in the country’s educational system. The rules came into effect Wednesday.

Amid tough new rules on minors gaming, NetEase says less than 1% of revenue comes from teens