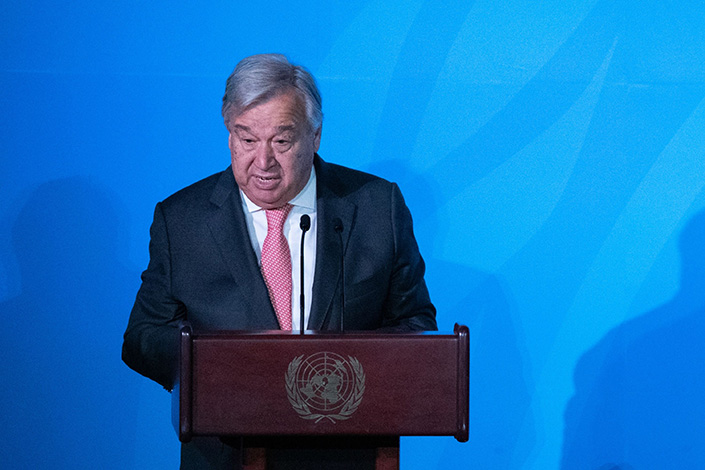 (Bloomberg) — United Nations Secretary-General Antonio Guterres said the U.S. and China need to find common cause on climate, trade and technology even as they disagree on issues like human rights and the South China Sea.

Guterres said in an interview Friday with Bloomberg News that the nations need to work urgently on improving ties by creating separate tracks on issues where collaboration between the global powers is essential. In the recent past there’s been “no serious negotiation” on anything and “there are very important things that need to be put on the table,” he said.

“It is essential that relations between China and the U.S. become functional because at the present moment they are totally dysfunctional,” he said. “And that, of course, has an impact on the capacity to solve many of the problems we have.”

Guterres, a 72-year-old former prime minister of Portugal, has struggled to forge diplomatic compromises for some of the world’s hot spots amid deepening rifts between the U.S. and its key rivals, Russia and China. Re-elected to a second five-year term earlier this year, he has focused instead on uniting the world behind efforts to combat climate change and environmental collapse.

Among the no-shows are Russia’s Vladimir Putin and China’s Xi Jinping, as well as France’s Emmanuel Macron and Ebrahim Raisi, the new president of Iran.

Guterres and U.K. Prime Minister Boris Johnson will host an informal, closed-door meeting on Monday in an effort to get countries to agree on bolder commitments to curb climate change.

Ahead of the COP26 summit in Glasgow, Scotland in November, leaders from the world’s largest emitters, including the U.S., China and Australia, as well as small island states confronted by rising sea levels have been invited to take part.

“The meeting is a wake-up call,” Guterres said. “We are on the verge of a disaster, and there is a risk of a real failure for COP26,” he said.

Countries’ current emission-cutting plans indicate there’s little chance that the world can avoid global warming rising above levels needed to avert more catastrophic weather events, according to a recent United Nations report. More than 70 countries — including India and China — have yet to submit revised proposals.

The pressure on countries like India to commit to a net-zero emissions target is high, with China having announced its own program for 2060. India has been reluctant to commit to a timeline and has instead urged G-20 nations to make a pledge focused on per-capita emissions.

On Afghanistan, Guterres called on global powers to help ease its economic crisis by allowing for “waivers” to get around sanctions on the Taliban militants who now control the government, some of whom are designated terrorists. He said it isn’t about recognizing the Taliban, which have a long history of human rights abuses, particularly against women and girls.

“It’s not a solution to completely strangle Afghanistan,” he said, adding that “we will need waivers” for travel and “mechanisms in order to inject cash in the country.”

“If the Afghan economy collapses it will be a disaster for the Afghan people, and we will see a massive exodus,” he said.

The Taliban sought additional humanitarian aid from the international community just after the UN raised more than $1.2 billion in emergency pledges earlier this week. Global leaders are planning to discuss Afghanistan on the sidelines of the UNGA event.

Biden plans to host a virtual summit on Wednesday that will focus on concrete measures to bring the pandemic to an end. He will call on world leaders to collectively donate one billion Covid-19 vaccines with the aim of inoculating 70% of the world in the next year as many countries struggle to obtain shots.

“We need to have a global vaccination plan, which implies double production capacity,” Guterres said, saying it’s unfathomable that in some countries in Africa less than 2% of the population is vaccinated even as rich countries have a majority of their populations inoculated. “Wherever there is capacity to produce vaccines, vaccines should be produced.”