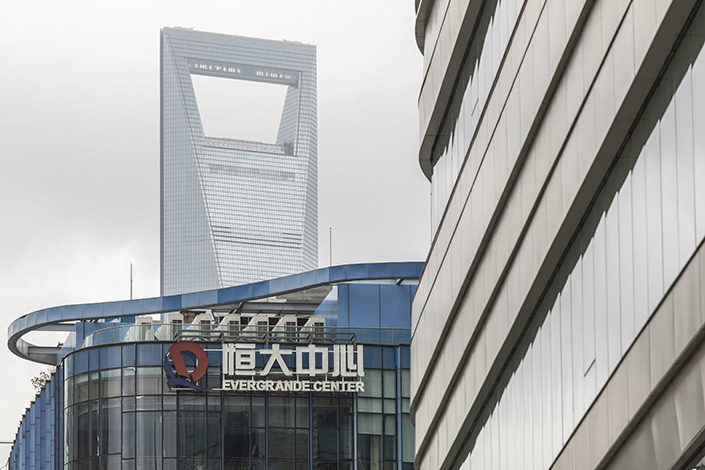 The China Evergrande Group sign atop the Evergrande Center in Shanghai on Sept. 15. Photo: Bloomberg

(Bloomberg) — A Chinese property owner in distress, and in short order the shares of American social media and auction companies are tumbling. The chain reaction may say more about the extreme altitude of global risk assets than it does about economic contagion.

While it doesn’t require excessive sleuthing to understand why commodity and bank stocks are quaking in the vortex surrounding Evergrande, the link with a stock like Twitter Inc. or EBay Inc. is harder to see.

“You’ve got a whole basket of things to be concerned about — throw this headline into the mix and that throws everything askew. So there’s going to be irrational derisking taking place that doesn’t connect logically,” said Art Hogan, chief strategist at National Securities, of the Evergrande crisis. “Does it make sense for technology stocks to be selling? No, but in a risk-off scenario, everything tends to be for sale — even cryptocurrencies.”

Though there may not be an obvious connection between some U.S. tech stock and China, that doesn’t mean the sell-off makes no sense. Sky-high valuations have been bear fodder for months, and Federal Reserve hawks are circling. Evergrande may seem like a flimsy rationale, but Monday’s rout is similar in size to a half dozen other market plunges in 2021 that didn’t require any news to ignite.

In fact, investors took the opportunity to sell in a market that’s been priced to perfection. The Russell 2000 Index of smaller companies, typically thought of as being more U.S. oriented and with less international exposure than the S&P 500, led declines, falling as much as 3.6% Monday. An index of regional banks, stuffed with companies like Bank of Hawaii Corp. and PacWest Bancorp, lost 3.9% at one point.

The iShares MSCI Emerging Markets ex China ETF fell more than 2%, while Twitter, which is not directly accessible in the country, lost more than 4% at one point. And companies only operating in the U.S., like supermarket chain Kroger Co., also dropped.

In other words, lots of assets are getting embroiled in the selloff, and “I don’t know that that’s entirely appropriate,” said Hogan.

Still, the word “contagion” is being thrown around due to Evergrande’s size. The Chinese real estate developer has about $300 billion worth of liabilities, more than any other property developer in the world, Bloomberg has reported, and it accounts for about 16% of outstanding notes in China’s high-yield dollar bond market. Though worries over the company’s ability to service its debt have been percolating for weeks, those concerns came into greater focus this week with some $83.5 million of interest on a five-year dollar bond coming due Thursday for the firm.

But investors are also contending with plenty other worries: weakening earnings forecasts, a slow shift in Federal Reserve policy, uncertainty in Washington D.C., and more.

“With the high valuations, the Fed meeting tomorrow, we have a perfect storm for a very difficult day today,” Katy Kaminski, chief research strategist and portfolio manager for AlphaSimplex Group, said in an interview on Bloomberg Television with Jonathan Ferro. “For us, it’s much more of an underlying problem that is much more economic in nature and pervasive as opposed to something simply financial.”

Not all of Monday’s tumbles were without reason. A Goldman Sachs basket of Russell 1000 companies with the highest sales exposure to China fell as much as 3.3% during the session, its worst day since mid-May, while another focused on stocks that are exposed heavily to supply chains in the country — also tracked by the bank — dropped 3.7% at its worst.

“China is still a huge demand-driver for basic commodities because they’re doing all the manufacturing for us,” he said. Braakman also singled out some of the tech giants, including Apple Inc. and Tesla Inc., with big China exposure. Apple in 2020 booked roughly 15% of its revenue in China, a figure that clocked in at 21% for Tesla, according to data compiled by Bloomberg.

To Gene Tannuzzo, a portfolio manager at Columbia Threadneedle, it’s logical that names tied to China’s property sector and related commodities would be hit, so he and his team are watching slumping iron ore prices. “If other commodities follow it lower — oil, copper — that is generally correlated with weaker returns for U.S. high yield,” and the latter still suggests risk of contagion is low, he said. “Everything is a little softer today, but none of those charts look like iron ore yet.”

Iron ore futures have tumbled almost 60% since a record in May.

Wells Fargo Investment Institute senior global market strategist Sameer Samana is also looking at high-yield spreads for an inkling on whether a contagion is at hand. To him, the selloff in U.S. stocks is much more about extreme positioning and a relentless buy-the-dip mentality that may have cut into sidelined cash that’s typically been used during drawdowns.

“Until high-yield spreads in the U.S. widen further, this should be viewed as an opportunity in U.S. equities,” he said.