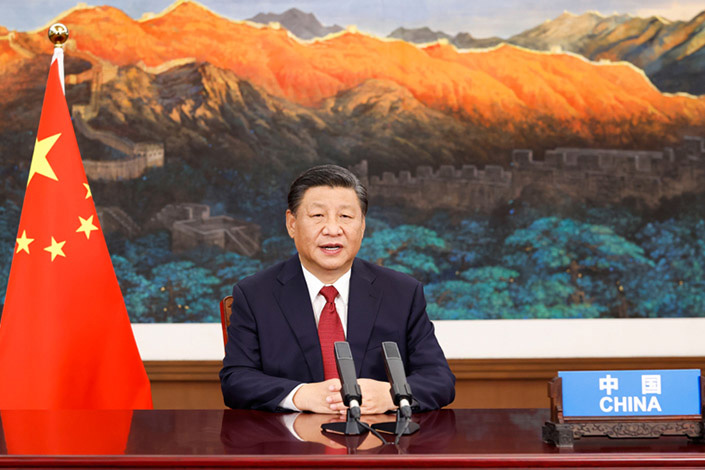 President Xi Jinping speaks at the general debate of the 76th session of the United Nations General Assembly via video in Beijing on Tuesday. Photo: Xinhua

China will not build new coal-fired power projects abroad, Chinese President Xi Jinping said in a speech to the United Nations General Assembly (UNGA) on Tuesday, adding that the country will increase efforts to realize its climate pledges.

Xi also said that the country will give more support to developing countries in developing green and low-carbon energy, according to a transcript of his speech delivered via video released by the state-run Xinhua News Agency.

Earlier in the day, U.S. President Joe Biden in a speech to the UNGA also addressed issues related to climate change with a pledge to double financial aid to developing countries. The leaders of the world’s largest carbon emitters noted the two countries’ commitments in a phone conversation on Sept. 10, during which Xi said that the two sides “may continue their engagement and dialogue to advance coordination and cooperation on climate change.”

The two countries have been engaged in talks on bilateral climate cooperation ahead of the upcoming U.N. climate talks in November in Glasgow, and action by China on overseas coal-fired power projects is reportedly one of the demands from the U.S. side. During meetings with senior Chinese officials in North China’s Tianjin earlier this month, U.S. Special Presidential Envoy for Climate John Kerry pressed Beijing for a moratorium on financing overseas coal-fired projects, according to a South China Morning Post report.

Commenting on Xi’s announcement Tuesday, Kerry said, “I’m absolutely delighted to hear that President Xi has made this important decision. It’s a great contribution. It’s a good beginning to the efforts we need to achieve success in Glasgow.”

Earlier this year, South Korea and Japan announced that they will stop funding overseas coal-powered plants.

U.N. Secretary General António Guterres also said in a statement that he welcomes Xi’s announcement. “Accelerating the global phase out of coal is the single most important step to keep the 1.5-degree goal of the Paris Agreement within reach,” he said.

Guterres also said that he is encouraged by the announcements from “the leaders of the world’s two largest economies regarding their commitment to climate action.”

Last September, Chinese President Xi Jinping pledged at the UNGA that China would peak its carbon emissions by 2030 and reach carbon neutrality by 2060. And in April, President Biden at a virtual climate summit vowed to reduce U.S. greenhouse gas emissions as much as 52% by 2030.

In mid-July, China launched its national carbon trading market, as the country considers an emissions trading scheme a key part of its strategy to transition to a low-carbon economy.

Apart from the climate pledge, Xi in his speech also reiterated the importance of international cooperation and multilateralism, saying that “differences and problems among countries, hardly avoidable, need to be handled through dialogue and cooperation on the basis of equality and mutual respect.”

“One country’s success does not have to mean another country’s failure, and the world is big enough to accommodate common development and progress of all countries,” he said, without specifically referring to the U.S.

Biden said in his speech that the U.S. is “opening a new era of relentless diplomacy, of using the power of our development aid to invest in new ways of lifting people up around the world, renewing and defending democracy.”

In an interview with the Associated Press, Guterres had warned China and the U.S. against a new Cold War and urged the two countries to fix a “completely dysfunctional” relationship.

For his part, Biden said the U.S. is “not seeking a new Cold War or a world divided into rigid blocs.”

China and the U.S. see climate change as an area for reengagement after four years of turbulent ties under the Trump administration, though Beijing looks to leverage the climate talks to address bilateral tensions while Washington insists on keeping politics out of talks.

China is the largest financer for overseas coal power plants. Other major financers U.S., Germany, Japan and South Korea implemented restrictions or announced an end on overseas coal financing, and world leaders have been paying attention to China’s move, Alvin Lin and Jake Schmidt from the Natural Resources Defense Council, a U.S. based non-profit international environmental advocacy group, wrote in an analysis.

China had plans to support over 40 gigawatts of new coal-fired power plants in 20 developing countries including Bangladesh, Indonesia and Vietnam, the authors noted.

“Support for coal projects globally has fallen as a growing number of leaders in developing countries have called for a rapid shift away from coal and toward renewable energy,” the authors wrote. “China’s new announcement has the potential to help promote a clean energy revolution around the world by sending an important signal that China will immediately shift its support for overseas coal power plant projects to work with developing countries to build the zero emissions future that we urgently need.”