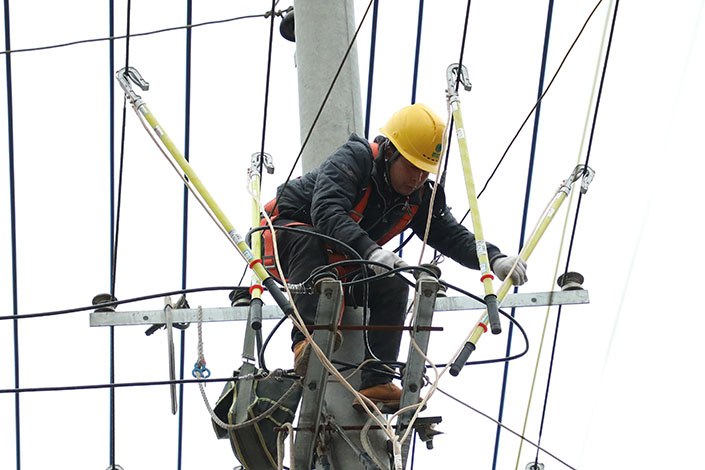 The operator recommended areas across Hunan curtail usage by shutting down power-hungry building facade lighting, landscape lighting and large billboards during peak hours. Priority will be given to residents and public services such as hospitals and schools, whose usage remains unaffected, the notice said.

Farther south in the manufacturing center of Guangdong province, surges in electricity consumption caused by high temperatures coupled with a shortage of coal and natural gas have led the government to suspend production at some factories and force others to stagger their operations so they aren’t all drawing on the power grid at the same time.

Supply issues are behind many of the power shortfalls, particularly for coal, as prices have soared over the past year.

An employee at a coal power plant in the Pearl River Delta region told Caixin that its inventory has remained at an alarmingly low level recently due to surging coal prices, and that the plant had been operating at a loss.

A benchmark coal price in China hit 1,086 yuan ($167) per ton during the week-long period that ended Thursday, according to data released (link in Chinese) by the China Electricity Council.

At that price, plus other operating costs, coal-fired power plants can barely make a profit, Shi Dongsheng, a market analyst at a coal-fired power plant in Guangdong, previously told Caixin. In addition, the current high prices have left them less willing to replenish their coal supplies at present.

The authorities have noticed. On Monday, the Guangdong Energy Bureau ordered power plants to stock up on coal and resume normal operations.

Similarly, a “triple whammy” led by low coal inventory in Hunan has raised alarms, according to the local grid operator’s statement. As of Wednesday, total coal inventories at power plants in the province were only enough to keep them running for nine days. Some power plants in You county and the city of Lianyuan only had supplies to keep operating for fewer than five days and are at risk of shutting down.

The National Development and Reform Commission requires power plants to have enough coal on hand to operate for 15 days, a requirement that it eased Tuesday (link in Chinese) to between seven days and 12 days for the peak season.

In addition to their coal supply problems, power plants in You, Leiyang and Lianyuan city have suspended operations as a result of widespread malfunctions, the notice said. This has caused power generation capacity in the province to fall to 11 gigawatts (GW), which is only 60% of the grid capacity.

Adding further woes to Hunan manufacturers is the decline in hydropower as water levels have fallen to low levels due to prolonged operation at full capacity, the notice added. Zhexi Dam, located in Anhua county, as well as Fengtan Dam in Yuanling county, could see water levels drop below the minimum needed to run their hydroelectric generators, undercutting generation capacity by another 1 GW.

In northern China, sudden blackouts in the provinces of Liaoning, Jilin and Heilongjiang have wreaked havoc for some residents and factories. Several residents in Liaoning’s capital of Shenyang told Caixin that their power was cut off Thursday evening for several hours.

A resident surnamed Liu said a blackout occurred in her neighborhood in Shenbei New Area during the evening rush hour, causing major traffic problems. It also forced the pregnant woman to walk up 24 floors to reach her apartment.

Liu said she received a notice from her property manager that said incremental power outages could last until Thursday.

State Grid Shenyang Electric Power Supply Company Co. Ltd. issued a notice late Thursday explaining that a combination of factors including decreased power output as a result of high coal prices as well as increased pressure on grid tie lines have caused a power shortfall “for the short term.”

The shortfall occurred despite orders to prioritize electricity use across the province, forcing authorities to implement emergency power cuts in 14 cities, the grid operator said.

A staff member at a power plant in Liaoning told Caixin that the plant was unable to maintain the required power system frequency as a result of lower power generation from the coal shortage. “An under-frequency event could affect the safe operation of the equipment and power systems,” the person said.

The provincial grid operator also urged manufacturers to cut back on how much electricity they use between 3 p.m. and 9 p.m. each day and asked residents to turn off home appliances they weren’t using during peak hours.

Also in Heilongjiang province, a resident living in Jixi city said he received a notice on Friday warning of a seven-hour power outage that night.

China is struggling with the thermal coal shortage as imports tightened after Beijing informally banned Australian coal last year and amid strong competition from other Asian and European nations ahead of the peak winter season.

Despite pledging to become carbon neutral by 2060, China is the only major economy whose coal demand grew in 2020, and is expected to increase by more than 4% in 2021, according to the International Energy Agency.