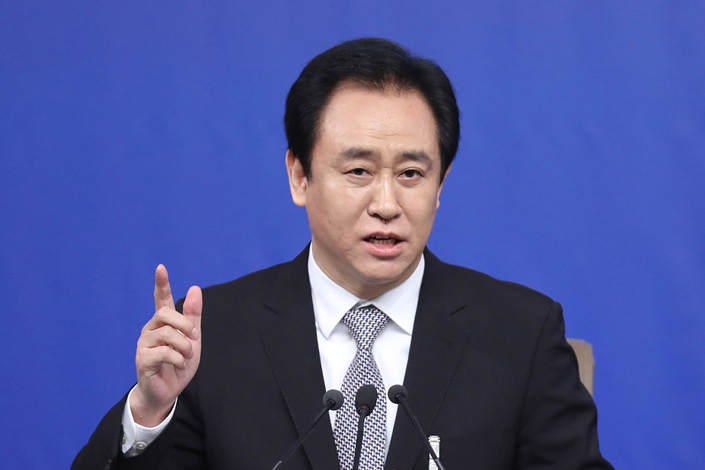 They say a good poker player knows when to hold a hand of cards and when to fold.

It’s no surprise then that as China Evergrande Group teeters on the verge of bankruptcy, it has triggered a rush for the exits among investors, spelling billions in losses not just for regular shareholders, but also for the poker-playing tycoons among the close friends who backed founder Hui Ka Yan, known as Xu Jiayin in Mandarin.

Chief among these is Chinese Estates Holdings Ltd.’s Joseph Lau (刘銮雄), one of Evergrande’s stalwart investors and Hui’s long-time friend and poker partner. Since August, Lau and his wife have been folding their bets and unloading stock of the world’s most indebted developer, whose shares have plummeted 80% this year.

Chinese Estates, which was once Evergrande’s second-largest investor, said it could take a loss of about HK$9.5 billion if it sold all its stock in the developer, despite pocketing almost HK$600 million since Aug. 30, according to filings. The exit by Lau is a sign that the company has lost the confidence of even its most loyal investors as it struggles to pay interest on its bonds and cover $300 billion in liabilities.

The timing seems fitting, as the story behind Evergrande’s rise to become one of the world’s biggest developers — and now its subsequent downfall — is closely linked to the friendship between Lau and Hui, and their penchant for high-stakes poker. It dates back to 2008, when Hui was looking to list Evergrande on the Hong Kong exchange to raise funds for what had already been breakneck global expansion of the company.

However, with the outbreak of the global financial crisis, that plan was postponed, putting Hui and Evergrande in a bind, having expanded its operations based upon the premise of raising capital via the listing. This led to a shortfall of funds amounting to the tens of billions of yuan.

As fortune would have it, around this time Hui became friends with — and a member of — the so-called “Big Two Club,” a small tight circle of some of China’s wealthiest tycoons who came together regularly in Hong Kong to play a Chinese poker game of the same name.

Over time and countless hands of poker, Hui won favor among the group, especially with Cheng, which was to prove crucial in getting his IPO plan for Evergrande back on track. According to sources, Hui sought funding from Cheng by playing cards with him over the course of several days. Eventually his efforts paid off and he secured his help and that of other members of the Big Two Club.

Consequently, in November 2009, Evergrande was listed on the Hong Kong Stock Exchange, raising HK$722 million. The assistance from Cheng, Lau and Cheung was crucial, adding their credibility and weight to the IPO by appearing at the roadshow, listing ceremony and then following appreciation dinners. All of this helped build investor momentum for Evergrande and put it on the fast track for growth.

Indeed, since then, Evergrande has had four main subsidiaries listed in Hong Kong, with Hui becoming a master of generating hype in the capital market to push up valuations.

Eager to show his appreciation to the Big Two Club, Hui gifted hundreds of millions in Evergrande shares to his poker friends, who also earned handsome returns from the company’s high-yield offshore bonds.

These were issued in large amounts on a rolling basis, with a considerable portion bought by Hui, a move that raised eyebrows, with some questioning whether this was to convert his onshore yuan assets to offshore ones.

Nevertheless, through company dividends, Evergrande’s yuan assets were transferred to Hong Kong dollar assets of major shareholders, who then used the money to purchase U.S. dollar bonds issued by the company.

Over the years since, the business dealings of the Big Two Club have become increasingly intertwined, with Hui in 2015 stepping in to buy out some of their projects in the Chinese mainland to the tune of $10 billion.

The card games have continued too, with reports that Hui would lose up to HK$20 million, with his poker friends then buying up Evergrande’s bonds. That is until this year.

Its debt crisis today appears to mark the end of Evergrande’s high-stakes capital game in Hong Kong, with its market cap plunging more than 90% to HK$31.3 billion on Friday from a record peak of HK$359 billion in October 2017.

Once its biggest backer, Lau’s Chinese Estates sold 130.7 million shares on Monday at an average price of HK$2.68 each for proceeds of HK$350.9 million ($45 million), lowering its ownership to 4.7%, falling below the 5% reporting threshold required by the bourse.

However, the future of Evergrande remains uncertain and perhaps indicative of this fact, its shares rose 15% in Hong Kong trading on Wednesday, ahead of a deadline for a $47.5 million interest payment to offshore bondholders, paring its loss on the year to 80%.

Chinese Estates shares jumped 33% before being suspended by the bourse, which said the action was taken “pending the release of an announcement containing inside information of the Company and pursuant to the Hong Kong Code on Takeovers and Mergers issued by the Securities and Futures Commission.”

Guo Yingzhe and Bloomberg News contributed to this report.