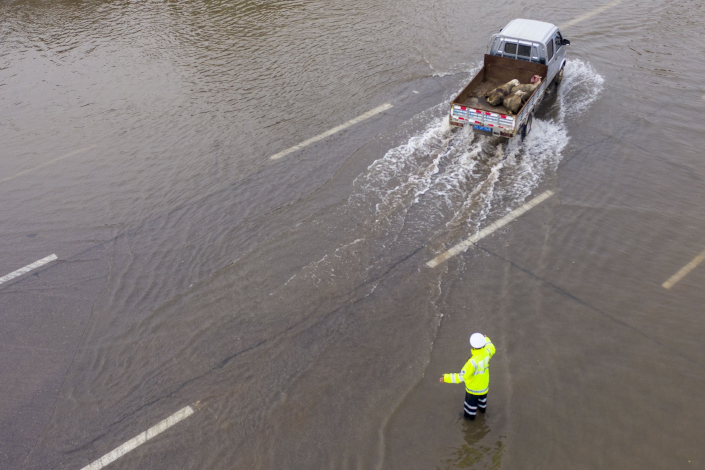 At least five people have died in flooding and landslides that struck several cities in Shanxi province amid record-breaking downpours during the weeklong National Day holiday.

The northern province on Wednesday launched a level three disaster response, after heavy rain that began Saturday triggered landslides and flooding that led to tens of thousands of people in several cities being evacuated from their homes, according to the provincial emergency management department. Level three is the second-lowest on the four-tier scale.

As days of heavy rain triggered floods, local authorities have evacuated more than 8,000 people from five villages in the city of Yuncheng. Another 15,000 residents of Qingxu county in Taiyuan, Shanxi’s capital, were also evacuated after the nearby Wuma River breached a dike, according to domestic media reports.

Several cities including Taiyuan, Lüliang, Yangquan and Jinzhong had record high precipitation for early October, with many cities recording 100 millimeters of rain from Saturday evening to Wednesday evening. Taiyuan and parts of Linfen and Jinzhong recorded more than 200 millimeters.

In late September, heavy rain inundated several Chinese regions, with casualties reported in Southwest China’s Sichuan province and Central China’s Henan province, adding to a year of unprecedented heavy rain and floods in the country. Huang Ming, the minister of emergency management, held a video conference with localities to coordinate flood prevention efforts this fall, a season in which floods are common in China.

During the holiday, several other provinces including Shaanxi, Gansu, Sichuan and Shandong, were also affected by heavy rain.

The Ministry of Water Resources announced Wednesday that the Yellow River, China’s second-longest river, had its third flood this year, the state-run Xinhua News Agency reported. The first two floods were registered on Sept. 27.