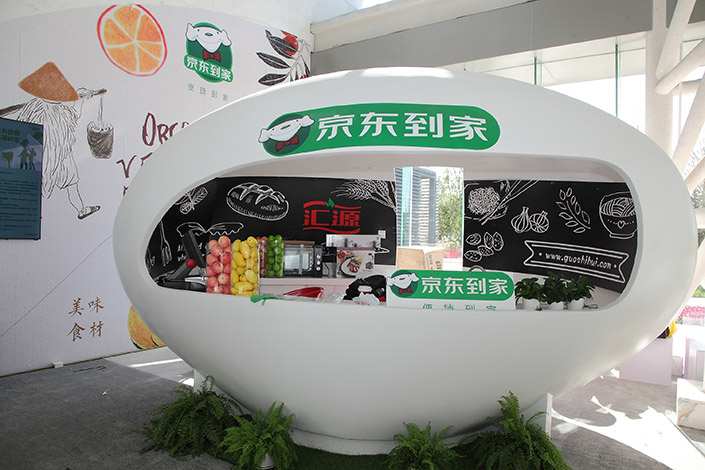 Chinese e-commerce giant JD.com Inc. launched a new so-called instant-delivery retail brand as it increases its focus on the sector that is currently dominated by rivals like Alibaba and Tencent-backed Meituan.

JD.com and its delivery platform Dada Group jointly unveiled “Shop Now” on Tuesday, a new retail service dedicated to delivering within one hour from nearby physical stores within a radius of 3 kilometers. It is different from JD.com e-commerce service, which sells a wider range of products and delivers over a longer distance.

Instant retail has become a popular business model that boomed during the outbreak of Covid-19 and subsequent lockdowns last year, when many residents were either forced to self-isolate at home or preferred to avoid going out. The market is expected to reach 900 billion yuan ($139.8 billion) by the end of 2024, according to data from iResearch.

But competition is fierce, with e-commerce giants such as Alibaba Group Holding Ltd. setting up its supermarket chain Hema to offer instant retail services back in 2015 and aiming to open branches in every Chinese city with over 1 million residents by 2031.

Meituan Dianping, meanwhile, is broadening its range of services to encroach on Alibaba’s traditional e-commerce, with its entry into fresh produce and grocery sales. The delivery giant was seeking about $10 billion this April to invest in online groceries, autonomous delivery vehicles and delivery drones, among others.

In June 2020, JD.com rolled out a one-hour delivery service on its O2O platform JD Daojia, which merged with Dada in 2016. The service enabled customers to purchase daily necessities from participating stores on JD.com and receive the products within an average time of one hour.

However, traffic underperformed expectations due to fierce competition in the market and chaotic inter-departmental cooperation, a source inside JD.com told Caixin.

As of June, JD Daojia had 51.3 million active users while JD.com had 530 million, whereas by comparison, Meituan had 628 million and Alibaba almost 1.2 billion, according to publicly available company data.