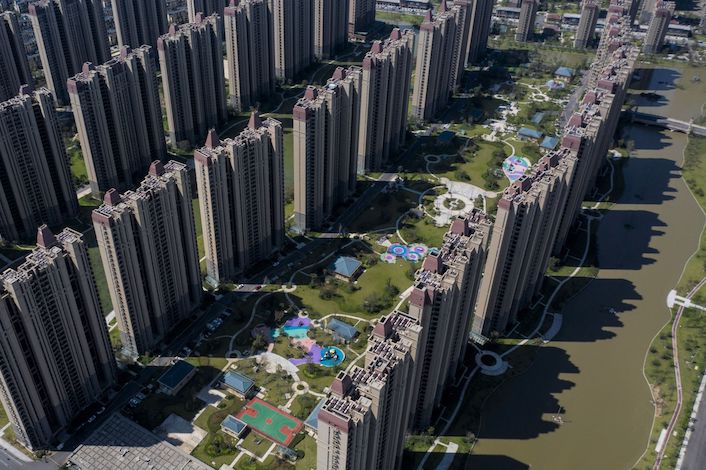 (Bloomberg) — China’s central bank broke its silence on the debt crisis at China Evergrande Group, saying risks to the financial system stemming from the developer’s struggles are “controllable” and unlikely to spread.

Authorities and local governments are resolving the situation based on “market-oriented and rule-of-law principles,” said Zou Lan. head of the financial market department at the People’s Bank of China (PBOC), at a news briefing Friday. The central bank asked lenders to keep credit to the real estate sector “stable and orderly,” Zou said.

“In recent years, the company failed to manage its business well and to operate prudently amid changing market conditions,” Zou said. “Instead, it blindly expanded and diversified.”

Concerns are growing that the Evergrande cash crunch is spilling over to other developers as President Xi Jinping maintains strict measures to cool the property market. Contagion fears intensified over the past two weeks after a surprise default by Fantasia Holdings Group Co. and a warning from Sinic Holdings Group Co. that its default was imminent.

“This is the strongest signal yet that authorities won’t come to the rescue of creditors of Evergrande and other developers,” said Travis Lundy, a special situations analyst who publishes on Smartkarma. They are sticking to the stance that there won’t be any property-boosting measures, aside from small steps such as faster home-loan processing and efforts to alleviate mortgage limits at banks, he said.

The central bank is urging property companies and their shareholders to fulfill their debt obligations, Zou said. A slump in developers’ offshore dollar bonds is a natural market response to defaults, he said.

China’s government has insisted that property not be used as a short-term stimulus for the economy, Zhou said.

Cities have experienced an excessive surge in property prices, which mortgage restrictions helped to curtail. Property investment slumped recently after some developers faced credit problems, but this is a normal market phenomenon, Zhou said. Some banks have misunderstood macroprudential policies regarding the property sector, he said.

Financial regulators have told some major banks to accelerate approval of mortgages in the last quarter. Lenders were also permitted to apply to sell securities backed by residential mortgages to free up loan quotas, easing a ban imposed early this year, according to people familiar with the matter.

Evergrande’s bonds and stock have cratered in recent weeks, with the sell-off spreading to other property developers, sending yields on the country’s riskier notes soaring to 20%. The developer’s offshore bonds are trading at about 20 cents on the dollar, suggesting investors are betting on default. The stock has plunged 80% this year and has been halted in Hong Kong for the past two weeks pending news on a possible sale of its property services unit.

The central bank’s criticism of Evergrande’s strategy to “blindly” expand doesn’t bode well for billionaire founder Hui Ka Yan. In previous times of trouble, Hui was able to rely on the help of his tycoon friends and local government support. This time, with more than $300 billion in liabilities and the company’s asset prices plunging, Hui appears more alone than ever.

The crisis at Evergrande has led to a drop in sentiment among homebuyers. An estimated 1.6 million households have put deposits on Evergrande apartments that have yet to be built. Sales by the country’s top 100 real estate companies tumbled 36% in September from a year earlier, according to China Real Estate Information Corp.

That’s putting pressure on China’s economy, which relies on the broader property industry for almost a quarter of gross domestic product, according to Goldman Sachs Group Inc. GDP growth probably slowed to 5% in the third quarter from 7.9% in the previous three months, according to economists surveyed ahead of government data due Monday.

Regulators will ensure that financial support is provided so that Evergrande’s property projects may resume, Zou said. The developer’s rapid expansion “led to severe worsening of its financial metrics, and risks blew up in the end,” he said.

“The central bank is making it clearer that its focus is to ensure Evergrande will speed up its asset disposal and resume normal construction of its projects,” said Patrick Wong, a property analyst with Bloomberg Intelligence.

Meanwhile, Hong Kong regulators started a probe into Evergrande’s financial reports in an investigation that will also look at work done by PricewaterhouseCoopers. The Financial Reporting Council initiated an inquiry into Evergrande’s 2020 annual accounts and 2021 interim report, according to a statement emailed Friday.

In a rare public rebuke after a meeting with the developer’s executives in August, the central bank told Evergrande to resolve its debt problems and refrain from spreading “untrue” information.

In September, regulators issued a broad set of instructions to the developer to take all measures possible to avoid a near-term default on dollar bonds while focusing on completing unfinished properties and repaying individual investors.