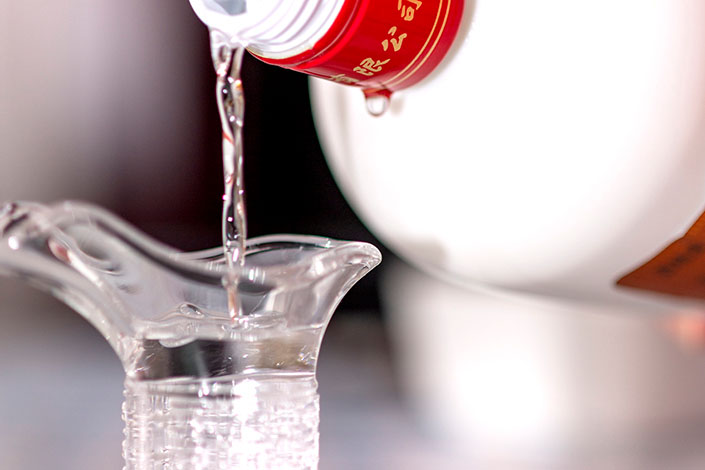 But these ambitious targets from the company come as the market faces slowing sales growth, increasing regulatory scrutiny of stocks seen as bloated with capital and a potential industry-wide consolidation.

The 47-year-old former director of the Guizhou Provincial Energy Bureau took over from his predecessor Gao Weidong, who was removed just 18 months into the job in August, marking the latest shakeup after a series of graft scandals at the country’s leading producer of “baijiu.” At the meeting, Ding pushed for reforms to corporate management, asset management, as well as marketing and pricing, according to a WeChat post (link in Chinese) published by the baijiu-maker.

Moutai is far from the only baijiu-maker looking to adjust its business to the tougher market, which has seen the giant’s profit growth in the first half dwindle to just over 9%, the lowest in five years, excluding 2020 when the pandemic disrupted operations.

Rivals including Luzhou Laojiao Co. Ltd. (000568.SZ) and Shede Spirits Co. Ltd. (600702. SH) have been cutting costs by laying off sales staff in order to meet profit growth targets, according to a distributor of another leading brand, Wuliangye Yibin Co. Ltd. (000858.SZ).

Distillers are also starting to directly manage sales channels to bolster efficiency. Companies including Shede, Sichuan Swellfun Co. Ltd. (600779 SH) and Sichuan Jiannanchun Group Co. Ltd. have been consolidating their scattered distributors into single companies that oversee sales in a particular region. Moutai has long been trying to strengthen management of its existing sales channels to give it more control over prices.

The licenses to distribute Moutai, which are tightly controlled, had in the past been handed out by some senior managers in exchange for political and financial gain, such as in the case of former boss Yuan Renguo, who was sentenced to life in prison last month for illegally accepting cash and properties worth 112.9 million yuan ($17.7 million).

“It is unscientific to deviate from the law of value. Moutai will follow the laws of the market, respond to market signals, and reflect its value reasonably,” Ding was quoted as saying at the meeting in a report by Sina Public Company Research Institute (link in Chinese).

The chairman’s comments were seen as a signal that the company will be raising factory-gate prices including for its signature Feitian Moutai, which has remained at 969 yuan a half-liter for the past three and a half years and has a recommended — but not mandatory — resale ceiling of 1,499 yuan. Market prices are currently at around 3,000 yuan per bottle due to high demand and distributors’ aggressive hoarding.

Baijiu, a clear spirit made from fermenting sorghum or other grains such as barley, corn, rice and wheat, is mostly consumed within China’s borders. The liquor comes at all price points, from gallon jugs costing a handful of yuan to highly-sought after Feitian Moutai, often served at state banquets and presented as a diplomatic gift.

The value of baijiu stocks meanwhile had been surging for the past four years, until recent volatility.

Kweichow Moutai’s stock crossed the 1,000 yuan-milestone on June 27, 2019, giving the distiller a 1.26 trillion yuan valuation at the time. The 19 baijiu-focused Chinese liquor producers listed on the mainland soared between 20% and 326% for the entire year of 2020, according to data compiled by Caixin.

The trend continued in the first half of this year, with the benchmark CSI Liquor Index surging as much as 5.7% and closing at a record high of 21,000 on Feb. 10, a day before the Lunar New Year holiday. However, the index tumbled following the festivities to a low of 14,108 before mounting a recovery through April and May.

The roller-coaster ride didn’t stop there.

Just as investors were getting comfortable, liquor stocks began a major retreat on June 7 — though not before the index set a record high of 21,438.35. It continued to slip throughout July and bottomed out at 14,314 after tumbling 7.7% on Aug. 20. Moutai shares sunk to 1,525 yuan, a significant drop from their Feb. 18 peak of 2,627.88 yuan, while rival Wuliangye fell 7.3% from the previous day, inflicting losses on fund managers and retail investors alike.

In fact, the sell-off on Aug. 20 was triggered by a symposium held that morning by the State Administration for Market Regulation, which noted the volatility and high valuations of baijiu stocks.

A source at a securities firm told Caixin that the event — attended by representatives from liquor firms and their investors and scheduled right before two national holidays when baijiu prices normally rise — sought to rein in both retail and stock prices, and sent a regulatory signal to control investor enthusiasm for spirit-makers.

“The flood of capital into the liquor market has raised concerns from many parties,” the person said. “This round of regulatory control is aimed at cooling down the primary market (where companies are rushing to go public) by knocking down the prices of the secondary market (where companies’ shares are publicly traded). Companies won’t be allowed to go public when the market is this overheated.”

A person at a mutual fund said measures such as restrictions on investment in the baijiu market and financing activities in related fields, as well as postponements of companies’ listings, could be possible.

A person in charge of a midsize distiller in Maotai — a Guizhou town famous for its baijiu, home to Kweichow Moutai and more than 1,700 other producers — told Caixin that recently the local government had banned sales staff of liquor companies from promoting investment opportunities on social media platforms including Weibo, WeChat and Douyin.

In a notice (link in Chinese) published on Oct. 5, the China Banking and Insurance Regulatory Commission ordered banks to ramp up funding to coal miners and energy companies amid a power supply crunch, and explicitly warned against using business and consumer loans to invest in luxury consumer goods, including Moutai and expensive Pu’er tea, in order to prevent “the disorderly expansion of capital.”

At the end of the second quarter, managers had cut allocations to the liquor sector from 15.9% to 13.9% from the previous quarter, according to data compiled by Zhongtai Securities. Specifically, funds have cut their holdings of the top three baijiu stocks Kweichow Moutai, Wuliangye, and Luzhou Laojiao by 1.31, 0.54 and 0.52 percentage points respectively during the quarter, noted Snowball Finance (link in Chinese), a finance information portal.

Sales propped up by price hikes

The concern over baijiu valuations, according to another mutual fund source, was connected to the slowing growth of major baijiu distillers, especially Moutai, as half-year earnings were weak even as stock prices soared.

“The average price-to-earnings ratio had been at about 50 times company earnings, far exceeding the manufacturing industry average,” a person at a private equity fund said.

“Regardless of how popular sauce-fragrance baijiu (酱香型白酒) may appear, total output of baijiu is declining every year,” the above Wuliangye distributor said, referring to the prestigious liquor class that Moutai belongs to.

A government crackdown in 2012 on officials’ luxury spending hit distillers hard, especially Moutai which is often used in business gift-giving. Almost 70% of distillers were forced to halt or cut production between 2012 and 2017. Given baijiu’s production cycle — which runs to about five years for sauce-fragrance varieties — the effects of this sudden cut to demand on production are still being felt.

According to official figures (link in Chinese), Chinese distillers produced 7.4 million kiloliters (2.6 million tons) of liquor in 2020, representing a drop of 2.46% from a year before and a decline for the fourth consecutive year.

Similarly, sales of the flagship Moutai and Kweichow Moutai’s other products slipped by 0.72% and 1.13% respectively, while market price per ton was up 13% and 6% on the back of more direct sales and high-price special edition bottles such as a range themed around the Chinese zodiac.

The only thing keeping the baijiu titans’ revenue from dipping along with production is the seemingly insatiable demand for luxury booze, with has allowed prices to keep rising.

Moutai raising its prices could help with its profit growth, the Sina report noted, saying that by increasing the price per bottle by 20%, the company can boost its revenue by 11.6 billion yuan, a 12% increase from last year.

“Based on historical data, price adjustments [made by Moutai] over the years are often accompanied by performance growth. The problem is, we don’t know when, or if, it will materialize,” it said.

The sector has now reached a point where a differentiation is likely to emerge. Liquor analyst Cai Xuefei pointed out that distillers with a solid quality foundation will continue to see decent growth while small and midsize distillers focusing on more modestly priced mid-range and lower-end products could lose favor with investors.