By Bai Yujie and Kelsey Cheng 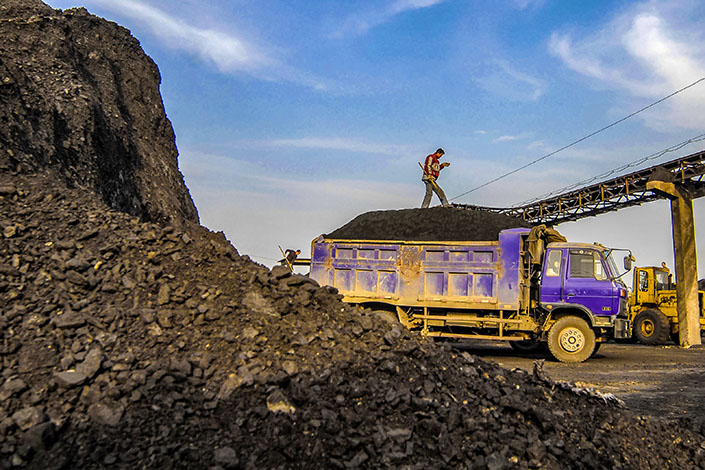 Workers load coal into haul trucks at a coal mine in Xiangyang, Central China’s Hubei province, in 2016. Photo: VCG

China’s top economic planner is reviewing potential interventions in the coal market as central government departments and local authorities roll out measures to tamp down high prices that are threatening energy security and economic growth.

At a meeting of major coal producers, the China National Coal Association and the China Electricity Council, on Tuesday, the National Development and Reform Commission (NDRC) said it is reviewing measures to intervene in prices and has “zero tolerance” for those spreading false information or engaging in market collusion.

Afterwards, China’s thermal coal futures fell by the limit in overnight trading, ending a surge in which the fuel more than doubled since the beginning of September amid blackouts and power restrictions.

“The current price increase has completely deviated from the fundamentals of supply and demand. As the heating season approaches, prices are still showing a trend of irrational increases,” the NDRC said in a statement (link in Chinese) on its WeChat page. The NDRC will “study specific measures to intervene in coal prices and promote the return of coal prices to a reasonable range.”

Central and regional governments have the power to restrict price differential ratios or profit rates and make other interventions when there is a rise in the prices of essential commodities and services, the NDRC said, citing China’s price law.

A person close to the NDRC told Caixin that the meeting sought to clarify the government’s direction on price control, and specific interventions will be introduced soon.

The most-active thermal coal contract on the Zhengzhou Commodity Exchange fell as much as 4.4% in overnight trading after closing at a record 1,835.6 yuan ($285.42) a ton Tuesday.

The NDRC’s statement was the latest in a flurry of activity this week as officials seek to halt the rally in coal, which provides more than half the country’s energy. China has been stung by the global energy crisis, forced to cut power to large industrial users to ensure enough supplies for home heating through the winter.

In a separate statement (link in Chinese), the NDRC said it will push for coal mines to operate at full capacity in the fourth quarter to achieve a daily output of at least 12 million tons, provided they can do so safely.

Officials in Yulin, a coal mining hub in Northwest China’s Shaanxi province, held a meeting Tuesday afternoon to ask state-owned mines there to immediately lower prices by 100 yuan a ton, threatening punishment for noncompliance, according to a letter of agreement obtained by Caixin. The agreement took effect at 6 p.m. on the same day.

In addition, prices in medium and long-term contracts renewed between private coal producers and buyers must not exceed 1,500 yuan per ton, while prices in the same contracts signed by state-owned producers must not exceed 1,200 yuan per ton. Yulin is the most important coal-producing area in Shaanxi, churning out 571 million tons of raw coal last year, accounting for 13.2% of the country’s total output.

A source at a state-owned coal mine in Yulin with 10 million tons of annual capacity said the mine’s selling price for one kind of thermal coal has been raised to more than 900 yuan per ton this week, but as price control measures materialize, that could drop by 11%.

Qinhuangdao, a key coal port in northern China, reached an agreement with coal mining companies, power plants and railway operators to cap prices of some supplies at no more than 1,800 yuan a ton, the Economic Daily reported, citing the country’s top economic planner.

The supply and demand dynamics mean there’s a chance coal’s gains could continue, Dennis Ip, an analyst with Daiwa Capital Markets, said Tuesday in a research note. “Coal price hikes are likely to be seen approaching the winter heating season,” he said.