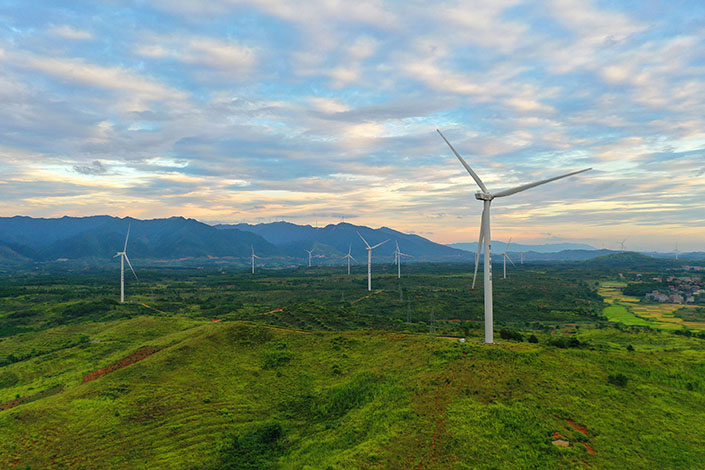 China’s cabinet has released a new action plan to bring the country’s carbon emissions to a peak by 2030, listing key tasks that need to be carried out to achieve the phased targets to cut carbon intensity.

The State Council plan highlights 10 fields where actions need to be taken, including green and low-carbon energy transition and the industry sector, while reiterating the targets of an 18% cut in carbon dioxide emissions per unit of GDP — also known as “CO2 emissions intensity” — by 2025 from the 2020 level, and a 65% cut in such intensity by 2030 compared with the 2005 level.

The Tuesday document was issued just two days after the Communist Party’s Central Committee and the State Council jointly released “working guidance” for reaching carbon neutrality over the coming decades, laying out general plans for different segments of the country’s economy and a transition away from fossil fuels. The documents also come days before the U.N. Climate Conference of the Parties (COP26), to be held in November in Glasgow.

Earlier this month, Premier Li Keqiang noted at a meeting of the national energy committee that the country should set a phased timetable and a roadmap to bring its carbon emissions to a peak. In September last year, President Xi Jinping announced China would peak its carbon emissions by 2030 and reach carbon neutrality by 2060.

The action plan notes the need to promote renewable sources of energy and “accelerate the development of a clean, low-carbon, safe and efficient energy system.”

China will “strictly and rationally” limit the increase in coal consumption by 2025 and phase it down in the 2026-30 period, the document says. The country will work to ensure that at least 50% of the electricity transmitted via newly constructed electrical power lines is generated from renewable resources.

Since late September, many parts of China have suffered severe electricity supply shortages, with local governments imposing power cuts and rationing on industrial users and residents.

The plan states that the country will promote “large-scale, high-quality” development of wind and solar power generation and accelerate the construction of wind and solar farms. The construction of hydropower bases will also be promoted, with projects including those on the Jinsha River, the Lancang River and the Yellow River. A total of 80 gigawatts (GW) of hydropower capacity will be added by 2030.

China will set a “reasonable layout and timetable” for the construction of nuclear power stations and maintain a steady pace of construction, the document said. The country will also keep oil consumption “within a reasonable range” and “gradually adjust the scale of gasoline consumption.

The document repeats that the country will “firmly curb the irrational expansion” of projects considered energy- or emissions-intensive, noting that authorities will conduct thorough investigation of ongoing projects and strengthen regular oversight. In June, the environment ministry released guidelines, stating that assessments of new construction projects must factor in the amount of planet-warming carbon dioxide they will emit once completed.

The action plan also stresses the need to develop green and low-carbon modes of transportation and advance relevant technological innovation.