Caixin Explains: Why the Communist Party’s Sixth Plenum Is So Important 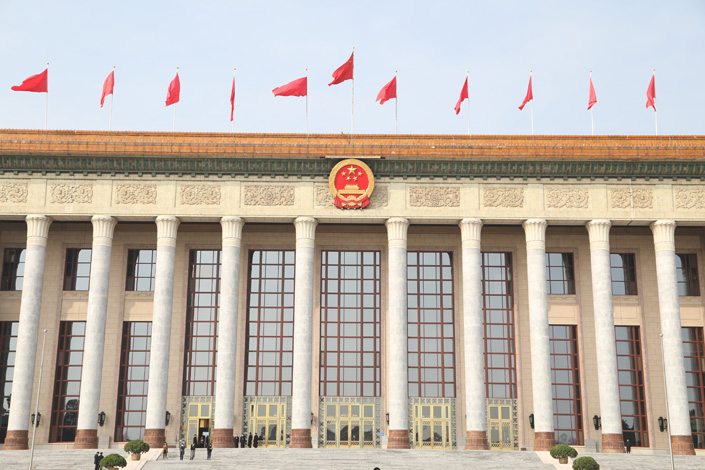 The Great Hall of the People in Beijing on March 7. Photo: VCG

The sixth plenary session of the 19th Central Committee of the Communist Party of China (CPC) began on Monday in Beijing, according to state media.

The profile described him as “a man of determination and action, a man of profound thoughts and feelings, a man who inherited a legacy but dares to innovate, and a man who has forward-looking vision and is committed to working tirelessly.” The article said that “Xi Jinping is undoubtedly the core figure mastering the tide of history.”

On Nov. 11, the plenary session adopted the Resolution of the CPC Central Committee on the Major Achievements and Historical Experience of the Party over the Past Century. Read the full text of the resolution here, and President Xi's explanation of resolution here.

What is the sixth plenary session?

The sixth plenary session of the 19th Central Committee will be attended by more than 370 members and alternate members of the committee.

Xi on Monday delivered a work report on behalf of the Politburo and provided explanations on a draft resolution “on the major achievements and historical experience of the CPC’s 100 years of endeavors,” according to Xinhua.

The other key plenary sessions include the second one, held in January 2018, which deliberated and passed revisions to the country’s constitution, and the fifth session held late last year, which put forward suggestions for the 14th Five-Year Plan, a high-level policy blueprint for national economic and social development over the next five years, and long-range objectives through 2035.

How important is the sixth plenary session?

The draft resolution that will be deliberated during the meetings will “answer two important questions” on “why were we successful in the past” and “how can we continue to succeed in the future,” according to the People’s Daily.

Xi has noted the issues in a speech delivered at an event celebrating the Communist Party’s 100-year anniversary on July.1.

“Looking back on the party’s 100-year history, we can see why we were successful in the past and how we can continue to succeed in the future,” he said. “This will ensure that we act with greater resolve and purpose in staying true to our founding mission and pursuing a better future on the new journey that lies before us.”

The draft resolution under deliberation at this year’s session is regarded as the third historic resolution, according to state media. The previous two were deliberated and passed in 1945 and 1981.

It is necessary to summarize “the major achievements and historical experience of the CPC’s 100 years of endeavor,” according to the People’s Daily, the party’s official newspaper.

The significance of the resolution lies in the fact that it heralds a new journey of building a modernized socialist country, and ensure that the whole party keeps the same pace and moves forward, the newspaper said.

What do others say about the plenary?

Singapore’s influential Lianhe Zaobao newspaper said in an analysis that the CPC needs to enhance the unity of the party by adopting this historic resolution as, in the foreseeable future, competition between China and the United States and ideological conflict between China and the West could intensify.

The New York Times said in a preview that the Central Committee’s resolution will “shape China’s politics and society for decades to come.” It said the resolution will “dictate how the authorities teach China’s modern history in textbooks, films, television shows and classrooms.”

The article also said Beijing “cited the Soviet Union as a warning for China, arguing that it collapsed in part because its leaders failed to eradicate ‘historical nihilism’” — a term used by the party to refer to the viewpoints and interpretations that history lessons, ideological principles have no value.”

Predicting the meeting’s impact on China’s economy, Bloomberg Intelligence analysts said that the plenum would “set the tone for long-term ‘Common Prosperity’ policies and dominate stocks’ prospects for the country’s five-year plan to 2025. China investors may have to adapt to the new reality of shifting policy winds.”