By He Shujing, Zhai Shaohui, Wei Yiyang and Han Wei 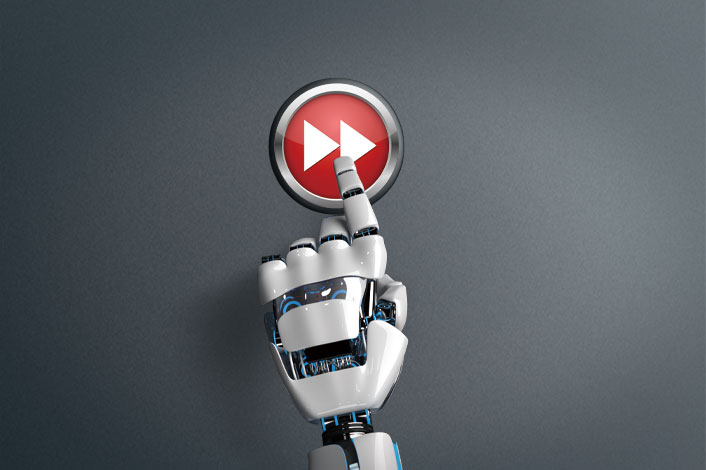 The market has long expected the four companies to debut on public stock exchanges after they depended for years on private fundraising. But now those funding sources are drying up even as their need for more cash continues. Risks associated with the quartet’s narrow business model and continued operating losses suggest that IPO investors may balk at paying share prices based on the private market valuations.

Some players did make progress this year toward public share sales. In July, CloudWalk, a state-backed AI unicorn, cleared regulatory reviews for an IPO on Shanghai’s Nasdaq-like STAR Market. The approval came after three rounds of regulator inquiries since the company filed its application in December.

In September, Megvii also won approval for a STAR Market listing after failed attempts to sell shares in the U.S. and Hong Kong. Alibaba-backed Megvii landed on the Trump administration’s trade restrictions blacklist in October 2019, barring it from doing business with American suppliers.

SenseTime, China’s largest AI company, which reportedly has been preparing for a public listing since 2017, filed plans for an IPO in Hong Kong in August. But Yitu halted its Shanghai listing plan in June after the bourse regulator demanded that it provide more business and financial details. Yitu filed its listing application in September 2020.

In the seven days that started Oct. 22, nine of the 16 newly listed stocks on China’s tech-savvy STAR Market and ChiNext board tumbled below their offering prices on the first day of trading, a rare scene in a market where investors have often been highly enthusiastic about new issues.

In October, the number of newly released mutual funds declined nearly 90% from previous months and from the same time a year ago, indicating cooling market sentiment.

The AI leaders’ push for IPO fundraising continues regardless of the market conditions, a person close to Megvii said. Despite the unfavorable situation, AI companies are in urgent need of tapping the stock market as fundraising from private equity and venture capital funds becomes increasingly difficult, a brokerage source said.

The AI quartet were darlings for private equity and venture capital investors since their establishment. Over eight years, the four companies raised a total of 50 billion yuan ($7.8 billion) from such funds. Their combined market value soared to more than 140 billion yuan.

But the companies are still running up operating losses. In three years between 2018 and 2020, the four booked total losses of 13.3 billion yuan, equivalent to 85% of their combined revenue. Based on their IPO prospectuses, Caixin calculated that for every 1 yuan of income generated by the companies over the past three years, they spent 1.85 yuan, mainly on labor.

As the companies push for public share sales, questions over their capacity to control costs, expand their business scope and generate new profit sources mounted among investors. Several stock market investors on the mainland and in Hong Kong told Caixin that they were concerned about excess valuation of the four companies.

Doubts over the AI enterprises provide a snapshot of challenges facing the nascent industry. Investors’ enthusiasm for the industry started weakening in 2019 as companies failed to deliver satisfactory results.

Investors are only becoming more rational about the industry, experts said. In a November 2020 report, research institute IDC forecast that China’s AI market would grow at an annual rate of 23% to reach $11.9 billion by 2024, down from its projection a year earlier of $12.7 billion.

In a 2020 speech, Yin Qi, co-founder of Megvii, said China’s AI companies have entered the so-called “Valley of Death” phase, referring to the period in the life of a startup when it has begun operations but has not yet generated revenue. Yin said the period could last 18 to 24 months before competitive players achieve sustainable growth.

Startups must survive the Valley of Death before a business takeoff, experts said.

“Companies are working hard to survive, and their exploration of standard and large-scale production solutions has led to massive costs,” said Li Lun, an AI expert at the China Academy of Information and Communication Technology. “But this is a problem at a specific period and stage.”

Each company has a large team consisting of thousands of people. SenseTime, the largest, had a workforce of 5,300 as of June, while the smallest, Yitu, had 1,700 employees.

“Most of the people serve certain customers and special demands,” said an AI engineer. “Whenever there is a new order, the workforce will grow.”

AI technology is still at an early stage and is designed for specific applications, said Yue Xipeng, a computer science professor at Fudan University in Shanghai.

“The simpler the application scenario, the better,” Yue said. There is still a long way to go in research to make the technology more widely compatible, he said.

The industry has realized the urgency of reducing costs. In response to securities regulators’ inquiries, Yitu and CloudWalk pledged to significantly cut spending to turn profits within five years. Yitu said it expects to turn profitable by 2025 if it can maintain 35% annual revenue growth while reducing expenses 43%. CloudWalk said it would make money by 2023 after cutting costs by 60%.

A more crucial task for AI industry leaders to survive the Valley of Death is to create more standard and more broadly compatible products to save costs. AI companies are like apprentices who have paid heavily for knowledge they learned, one industry analyst said. Only when they can repeatedly put the knowledge into practice can they make money.

The AI quartet are in urgent need of finding new revenue sources after they came to dominate China’s machine vision market, analysts said.

“The (technology’s) application in security, smart life and other areas has reached a bottleneck, and the companies need another track of growth,” one analyst said. The search for new business drivers requires funding support, forcing the companies to seek IPOs, he said.

With advanced facial recognition technology, the quartet has become the main suppliers of security systems for urban management, airports and traffic, among others. In 2020, security-related business accounted for 98% of Yitu’s revenue and more than 60% for CloudWalk and Megvii. SenseTime hasn’t released financial details.

The overreliance on a single revenue source has long been a concern for AI companies’ growth potential. Since many security projects are funded by governments, AI companies’ businesses are often affected by government budget plans and may lack sustainability, analysts said.

All four of the leading players have actively searched for new business directions in recent years, seeking to provide technology solutions for health care, logistics and autonomous driving. However, progress has been slow.

The AI companies “are still developing applications in a relatively narrow space with a ceiling in sight, but new areas haven’t been found,” one industry investor said.

More competitors are joining the game as technology barriers shrink, further squeezing the AI companies. In the security sector, surveillance camera producer Hangzhou Hikvision Digital Technology Co. Ltd. has become a big challenger as it invests heavily in its own software development. Internet giants like Alibaba Group and Tencent Holdings have also tapped into AI businesses with heavy investments.

Whether the Chinese AI giants’ high valuations from the private equity market will be acceptable to stock market investors remains a question as they move toward public offerings.

Analysts are debating how the quartet should price their public offerings, although some said their stock market valuations may fall below the current levels.

A fund manager said that since most AI companies are still operating at a loss, investors are likely to value their shares based on price-to-sales (P/S) ratio. A brokerage analyst estimated that SenseTime’s stock market valuation may range between 30 billion yuan and 76 billion yuan if calculated with a P/S ratio of 10 to 25. That would be below its current $13 billion valuation.

There is still no widely accepted pricing model for AI startups due to the lack of a comparable example, analysts said. Business differences among companies mean that it is hard to adopt a unified P/S ratio to estimate their valuation, they said.

As technology advances and investors’ understanding of the AI industry deepens, a more precise and specific valuation model will be worked out for AI companies, Sinolink said in a report.

Compared with other tech businesses, AI companies are still in an early stage of growth, but the technology will undoubtedly become a crucial force to drive global industrial transformation, analysts said.

The approval of CloudWalk and Megvii’s listing plans indicated that Chinese regulators are willing to give the startups some opportunities to tap into the public capital market, one industry investor said.

But due to concerns over political risks such as investment restrictions in the U.S., foreign investors may be hesitant to invest in Chinese AI companies, limiting the pool of available capital. The companies that sell shares earlier will have a better chance to lure investors, a Hong Kong-based fund manager said.

Yue Yue and Zhang Erchi contributed to this story.