In Depth: Can China Pull Itself Out of the Economic Doldrums?

By Tang Ziyi and Yu Hairong 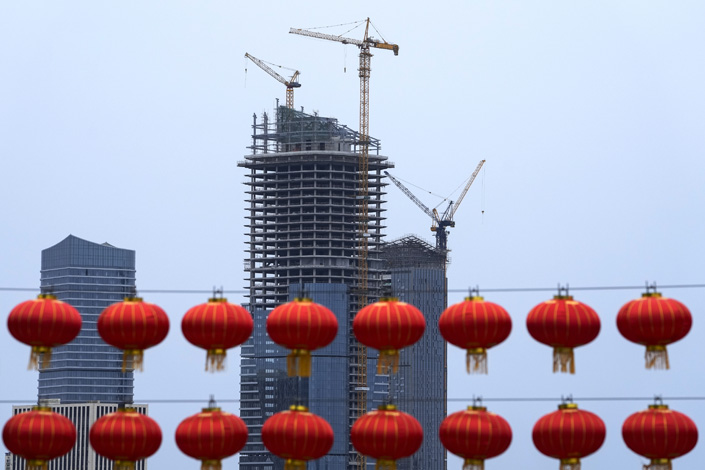 China’s GDP growth is expected to slow even further in the fourth quarter, as outbreaks of Covid-19 across the country, power shortages, surging raw material prices and property jitters continue to weigh on activity, adding pressure on policymakers to do more to support the economy.

Analysts say the government will need to ease fiscal and monetary policies to prop up demand while ensuring that the measures don’t derail its efforts to curb carbon emissions and resolve long-standing problems such as the overheated housing market, and high corporate and local government debt.

As the world’s second-largest economy ploughs through the final quarter of the year, here are five key things to watch for.

Can the slowdown in GDP growth be reversed?

The short answer is no, at least in the near term. Analysts expect economic expansion to continue to moderate in the fourth quarter from the 4.9% year-on-year pace seen in the July-September period, which was the weakest in a year. HSBC Bank PLC forecasts year-on-year growth of 4.6%, Macquarie Capital Ltd. estimates 4.2%, Nomura International (Hong Kong) Ltd. sees 3% while UBS Investment Bank’s forecast is even weaker at 2.7%.

Even so, China will still be able to achieve its full-year GDP growth target of above 6%, which was announced at the annual meeting of the National People’s Congress (NPC) in March, because expansion in the first half was much stronger –– 18.3% year-on-year in the first quarter and 7.9% in the April-June period –– owing to weak comparisons with the first half of 2020 when the country was in the grip of the coronavirus pandemic. HSBC forecasts GDP growth for the full year of 8.3%, Macquarie stands at 8.1%, Nomura estimates 7.7% while UBS forecasts 7.6%.

China was the only major economy to expand in 2020 as the coronavirus pandemic devastated activity across the world, growing by just 2.3%. The government didn’t set a GDP growth target last year because of the uncertainty caused by the epidemic. This year’s goal is lower than in 2019, when it was a range of 6% to 6.5%, but is in line with the 6.1% achieved that year.

The less ambitious target for 2021 was aimed at putting greater emphasis on quality rather than quantity, giving the government room to push forward with structural reforms, continue its campaign to control the amount of debt in the economy, and make progress on meeting President Xi Jinping’s target of reaching peak carbon emissions by 2030 and carbon neutrality by 2060, including by curbing output in energy-intensive industries.

China’s regulatory whirlwind over the past year has created uncertainties and headwinds for the economy. The State Administration for Market Regulation and other watchdogs have cracked down on monopolies and market abuse, and tightened regulation of technology and ecommerce giants, and private tutoring and education. The government has also continued its long-standing campaigns to deleverage the economy and curb financial risks by tightening controls on local government debt and the borrowings of property developers.

But so far, the government is holding firm, and an article on China’s current economic situation published by the state-run Xinhua News Agency in October said that “the sound momentum of economic development for the long-run has remained unchanged.” The article, which was based on interviews with “a number of authoritative departments and individuals,” sent a clear signal that the strategy is working and high-quality growth remains the priority.

The government has taken measures to respond to the severe shortages of coal and electricity which have included relaxing rules on coal production, increasing imports of the fuel, cracking down on speculation and hoarding, and raising electricity tariffs for industrial consumers so that power generating companies don’t lose money. But these measures will take time to bear fruit, according to Wang Tao, chief China economist at UBS Investment Bank. The policy responses will likely only mitigate energy shortages and resulting production cuts, not eliminate them, she said.

The power consumption needs of households will be prioritized to make sure they aren’t affected over the winter months, so the industrial sector, especially carbon-intensive industries, will likely continue to be affected by power shortages and restrictions on production in the fourth quarter, said Wu Ge, chief economist at Changjiang Securities Co. Ltd.

The power shortage has spurred the government into changing the pricing system for electricity. It has already decided to raise the limit on how much generating companies can charge industrial users above benchmark prices so that they don’t lose money. That could help alleviate the electricity shortages, but just as important is ensuring adequate coal supplies. Imports of the fuel have jumped year-on-year over the past five months, and were up 96.3% in October, customs bureau data released Sunday show. The government has also allowed old mines to reopen and accelerate approvals for expansion to boost domestic production.

Even so, State Grid Corp. of China warned Sunday of a “tight balance” between power supply and demand that would last until spring and there could be regional power outages.

China was the first country to be hit by the pandemic and the first to emerge from its grip due to the government’s stringent measures to control the spread of the virus. Domestic manufacturers were not only able to restore production but also took market share from other exporting countries hit hard by the pandemic. As the world’s manufacturing powerhouse, China was also the main global supplier of medical equipment and supplies needed to fight the pandemic, and benefited from the surge in demand for work-from-home products such as furniture and computers. These factors combined led to a surge in goods exports this year, with a jump of 49% year-on-year in dollar terms in the first quarter and 33% in the nine months to September, official data show. The trade surplus widened to $427.5 billion in the first nine months of 2021 from $316.6 billion a year earlier, giving GDP growth an extra boost. The trend has continued in the fourth quarter, with exports jumping 27.1% year-on-year in October and the monthly trade surplus widening to a record $84.5 billion, the customs administration said on Sunday.

Some economists caution that the headline export numbers expressed in U.S. dollars exaggerate the strength of overseas sales because they are nominal figures that don’t take into account the impact of price increases. Once prices are factored in, the growth in exports measured in volume terms is much lower.

Export volumes rose only 6.8% year-on-year in October and slowed in sequential terms, analysts at Oxford Economics Ltd. estimated in a note after the data release. Economists from Nomura estimate the export price index, measured in U.S. dollars, may have increased by around 20% year-on-year in October after a 19.5% increase in September, indicating China’s real export growth in October may only have been around 7%.

Nomura expects export gains to slow significantly in coming months, with year-on-year growth sliding to 14% in November alone, due to factors including a high comparison base, a shift in foreign consumption from durable goods to services as more countries opt to “live with Covid,” and elevated factory-gate inflation.

Will the property sector recover?

Not in the short term, according to many economists, who see sales, investment and land acquisition showing sluggish growth or even contraction over the next few months and possibly for the whole of 2022. Confidence has taken a hit among homebuyers, property developers, banks and bond investors and will take time to recover.

The effects of China’s long-running campaign to stamp out speculation in the residential property market, control prices and rein in the excessive debt of real-estate developers have become more obvious this year. Government and industry data show sales growth has plummeted as have investment and land acquisitions by property companies.

Property has been a key driver of the economy – the sector overall accounts for 15% to 20% of GDP, according to Macquarie, while UBS estimates it could drive around 25% of growth through both direct and indirect channels. So the turmoil that hit the residential real estate market starting in the third quarter, triggered by China Evergrande Group’s debt crisis, will have an impact on domestic demand.

Government data show that property made up around 28% of fixed-asset investment (FAI) in the first nine months of the year, even higher than the 21% contribution in the same period in 2019 as investment in other sectors of the economy slowed.

UBS forecasts new property starts and sales will decline by 15% or more in the fourth quarter and property investment will fall by 5% or more. In 2022, new starts could drop around 10% and real estate FAI could slide by between 4% and 5%, they said in a Nov. 9 report.

How will the government respond to the economic headwinds?

Most analysts are not expecting significant stimulus or policy relaxation as the government focuses on fixing longer-term problems including containing financial risks, further reducing macro leverage, and making progress on cutting carbon emissions.

Even so, they do see more monetary and fiscal easing, possibly with reductions to banks’ reserve requirement ratio (RRR), more tax breaks for companies and additional lending for small and midsize enterprises.

A reduction in interest rates is not on the cards according to many economists in view of high producer and consumer inflation and the government’s priority of containing financial risks. But Capital Economics Ltd. is forecasting three small cuts in the one-year medium-term lending facility (MLF) between now and the end of March 2022 totaling 50 basis points, taking the rate down to 2.45% which will also lead to the same drop in the benchmark one-year loan prime rate to 3.35%.

Nomura economists expect the People’s Bank of China may use instruments such as the MLF, open market operations and the new green lending facility targeting carbon emissions reductions to keep liquidity conditions reasonably adequate in the fourth quarter.

UBS, Capital Economics and China International Capital Corp. Ltd. expect another cut to the RRR, after a surprise reduction in July, possibly by the end of this year, which will release more funding into the banking system. But Macquarie sees the chance of a cut “drifting lower” as high producer-price inflation constrains monetary easing, with the central bank preferring to offer help through other means such as adding to its relending quota, the firm’s analysts wrote in an Oct. 31 note.

On the fiscal front, UBS economist Wang expects China will further loosen policy in the fourth quarter and early 2022, with more issuance of local government bonds, faster approval of investment projects and an easing of financing curbs on local government financial vehicles. A more significant fiscal easing, however, may only take place after the NPC meeting in March, Wang wrote in an Oct. 18 note.

Property is the wild card, as the government weighs up the risks of a severe downturn hurting economic activity against the need to bring down property developers’ debts and stamp out speculation.

The consensus among economists is that the government will not reverse its overall policy stance, although it will offer some support at the margin – mortgage lending rates have already started to come down and regulators have told banks to meet “reasonable credit demand” from homebuyers and developers.

UBS expects only “modest” easing of property policies which might include adjusting land supplies, further improving access to credit and allowing some local governments to ease implementation of property curbs. Economists at Macquarie say that with the government’s property policy focused on reducing wealth inequality and curtailing financial risks, there is only likely to be “fine-tuning” rather than a change in direction. Stimulating the sector to support growth would be a “last resort,” they said in a Tuesday note.