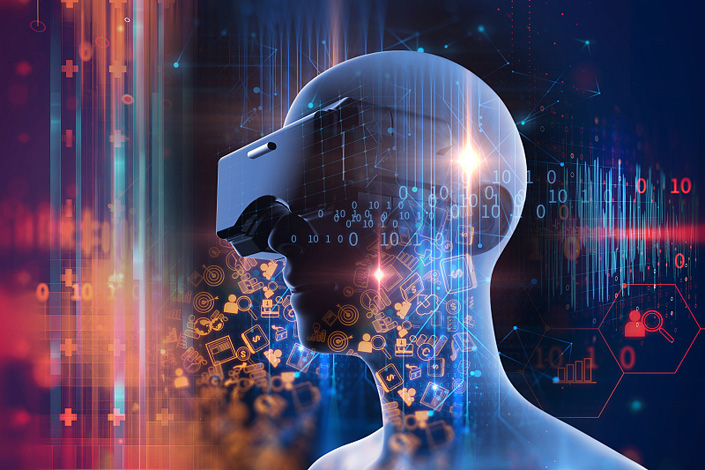 Metaverse — the latest tech industry buzzword sparking a familiar cycle of grand claims about the future and frenzied investment.

In China, dozens of companies have declared that they will be building the digital realm of the future.

A metaverse generally refers to an immersive, online, virtual-reality environment in which users can interact. The term was first coined in the 1992 novel “Snow Crash” by American writer Neal Stephenson. One recent portrayal of a metaverse-like environment was in the 2018 film “Ready Player One.”

“Those who feel that they’re less than perfect in the real world can change their identities in the virtual world; you can also buy land, build houses and sell your own NFT (non-fungible token) artwork,” an investor focusing on the gaming industry told Caixin.

According to venture capitalist Matthew Ball, who co-founded the first metaverse-focused exchange traded fund, it will be able to offer unprecedented interoperability of data.

“Your Counter-Strike gun skin, for example, could also be used to decorate a gun in Fortnite, or be gifted to a friend on/through Facebook. Similarly, a car designed for Rocket League could be brought over to work in Roblox,” wrote Ball in an article in last year.

For non-gamers, this could mean a virtual experience where people can attend interactive events, or try on clothing and shoes at digital storefronts.

While the metaverse may not exist now — it could take decades to materialize — the concept has come to the fore during the Covid-19 pandemic as lockdown measures led to a surge in demand for online business and entertainment. Investment has flooded into technologies such as virtual reality (VR) and digital imagery. Chinese companies in the gaming sector, a key area for getting the metaverse up and running as they possess tools for complex simulation, have seen their valuations soar.

However, not everyone is equally enthusiastic about the concept as often described.

John Henke, founder of Niantic, the company behind popular augmented reality game Pokémon Go, described the vision of a “Ready Player One”-like virtual world as a “dystopian nightmare,” suggesting that “technology should be used to make … core human experiences better — not to replace them.”

Right now, companies are being kept on their toes as regulators play catch-up. Amid concerns flagged over market speculation, data access and national security, Chinese authorities appear to be taking a cautious approach, attempting to strike a balance between regulatory control and the risk of stifling innovation.

“We believe the concept of the metaverse is a vast one, and the construction of its economy and decentralized structure may face regulatory uncertainty,” said Fang Guangzhao, analyst at Kaiyuan Securities in a research note.

In a major rebrand, Facebook announced on Oct. 28 that it was changing its name to Meta Platforms Inc., indicating its commitment to a concept it has described as the next frontier of digital interaction.

A week later, Microsoft Corp. unveiled its own vision of the metaverse at its Ignite Conference, focusing on its business collaboration and productivity platform Teams, which will allow users to attend meetings as avatars. Omniverse, a computer graphics and simulation development platform launched by chipmaker Nvidia Corp. in April, is widely seen as having the most fleshed-out metaverse strategy so far.

Funding has been pouring into video game companies, which are viewed as already possessing the most promising target audience.

Epic Games, which is behind the phenomenon Fortnite, announced in April that it had raised $1 billion to fund its “long-term vision for the metaverse.” Game-creating platform Roblox, which entered the Chinese market through a partnership with Tencent and reached a $45 billion valuation when it debuted in New York in March, announced in September that it is aiming to build a metaverse “where people can come together within millions of 3D experiences to learn, work, play, create, and socialize.”

Opinion: The Metaverse Is the Hot New Thing in Tech. It Also Poses Considerable Dangers

Chinese tech companies are also jumping on the bandwagon.

One day after Facebook announced its name change, search engine and AI firm Baidu Inc. filed trademark applications on the term “metaapp” in the communication, scientific instruments and design research categories, according to an entry from business information site Qichacha.

Earlier this month, the company released Xirang (希壤), describing it as a metaverse app that allows users to explore virtual environments through smartphones or VR goggles. In late October, video game giant NetEase Inc. applied to trademark a slew of terms linking “metaverse” and its AI and gaming units.

The metaverse is also believed to be the driver behind ByteDance Inc.’s acquisition of China’s largest VR-headset maker Pico Interactive Inc. in August, as well as its 100 million yuan ($15.6 million) investment in Chinese Roblox rival Reworld in April.

Even the country’s tourism industry is getting on the hype train. On Thursday, local officials unveiled (link in Chinese) a “metaverse research and development center” at the Wulingyuan Scenic Area in Zhangjiajie, Hunan province, aiming to integrate the development of the tourism industry with the concept. The mountains of the Zhangjiajie National Forest Park in part inspired the design of locations in 2009 sci-fi blockbuster “Avatar.”

The hype is also being reflected in China’s capital markets.

Right now, out of the 75 metaverse concept stocks in the A-share market selected by financial information and data provider Hithink RoyalFlush Information Network Co. Ltd., 60 of them saw a rise on Monday, with 34 of them scoring one-day gains between 3% and 20%.

Shares of online game developer Shenzhen ZQGame Co. Ltd. (300052.SZ) rose by 420% from the beginning of September to its high on Nov. 11. The company announced on Sept. 6 that it is partnering with a liquor-maker to develop a metaverse game, in which players can make spirits virtually and earn a real product.

All this hasn’t gone unnoticed by the country’s regulators. The surge caught the attention of the Shenzhen Stock Exchange, which later sent a letter to Zhejiang Jinke Tom Culture Industry Co. Ltd. (300459.SZ) urging it to substantiate its claims about metaverse development and asking if it used the buzzword to boost its stock price while its controlling shareholder was selling down their stake.

It also sent a notice to network provider Hubei Century Network Technology Co. Ltd. (300494.SZ) on Nov. 5, demanding to know the contents of its metaverse strategy. The company, which saw its shares rise by nearly 80% from the beginning of September, responded in a filing (link in Chinese) that it would invest up to 20 million yuan in developing VR technologies.

On Sept. 9, the state-run Securities Times warned in a commentary (link in Chinese) that “investing is not a game in the virtual world” and those who blindly pursue an illusory concept such as the metaverse could end up getting hurt in the end. Metaverse-linked stocks tumbled that day.

“The metaverse is too far away. It’s all hype and there’s no sustainability,” a securities analyst focusing on the gaming industry said.

Similarly, in a commentary published last Friday (link in Chinese), state-run Economic Daily said retail investors should keep a “clear understanding of the hyped up metaverse concept stocks” and shouldn’t rush to pay for the “recently emerged and immature concept.”

“Excessive capital speculation on concepts is not conducive to the healthy development of the capital market,” the paper said, adding that regulatory authorities should pay close attention to market movements and abnormal transactions, and strictly investigate and punish market manipulation behaviors in accordance with laws and regulations.

On Oct. 30, the China Institutes of Contemporary International Relations, a state-run think tank affiliated with the Ministry of State Security, published a research note (link in Chinese) saying the metaverse has “potential national security significance” in terms of technological hegemony and technological safety.

Despite these signals of official misgivings, the world’s biggest gaming company — Tencent Holdings Ltd. — remains optimistic, saying that it believes the government could come to support the concept.

“The Chinese government will be in support of the development of such technologies as long as the user experience is actually provided under the regulatory framework,” President Martin Lau said in an earnings call on Nov. 10, explaining that the company views it as an opportunity to add to its existing gaming and social media businesses.

Lau noted that the regulations governing China’s metaverse would be different from the global market, but he believes Beijing is not “fundamentally averse” to the metaverse.

At the same time, the country officially established last week its first metaverse industry group under the China Mobile and Communications Association which includes state-owned China Mobile and China Unicom.

Yu Jianing, the executive director of the Metaverse Industry Committee, said the group will focus on strengthening innovation for the metaverse industry as well as promoting inter-company collaboration.

Cryptocurrencies in the metaverse

Apart from gaming, cryptocurrencies and blockchain are predicted to be big aspects of the metaverse, both in terms of how assets will work and how those assets will be traded.

On Nov. 2, crypto exchange Binance Holdings Co. Ltd. announced that its venture capital arm is investing in a gaming NFT metaverse named Star Sharks, which allows players to “own, synthesize, trade, and compete with their pet sharks for rewards.”

If these trends are to be replicated in China’s metaverse, it might look different from Western versions, as the government has already banned all crypto-related services and transactions.

However, NFTs are thriving in China right now. Tencent launched an NFT purchase and collection app called Huanhe in August, while Ant Group Co. Ltd. held a successful sale of NFT payment barcode skins on its payment app Alipay in June, all using blockchains that use the yuan as payment.

Blockchain — a digital distributed, decentralized, public ledger which is named as one of the key technology sectors in China’s 14th Five Year Plan — is expected to play a key role in how metaverse assets will function, according to Orient Securities in a report published in September.

“One incentive of the metaverse is the uniqueness of digital assets, thus ensuring that the economy in the metaverse will not undergo inflation and maintain a stable operation of the community. With blockchain technology, metaverse participants can receive rewards based on their contribution such as time, money and content creation,” the report said.

While no one can say for certain how the metaverse will turn out, one thing is for certain: players across sectors — including chips, algorithms, computer imagery and display, as well as content producers — must move forward together, Guo Peng, Qualcomm’s head of XR in China, told Caixin.

“Only when each aspect is built can the extended reality industry be able to see output and drive the overall market,” Guo said.