Cover Story: Disappointments and Hopes From the Climate Summit 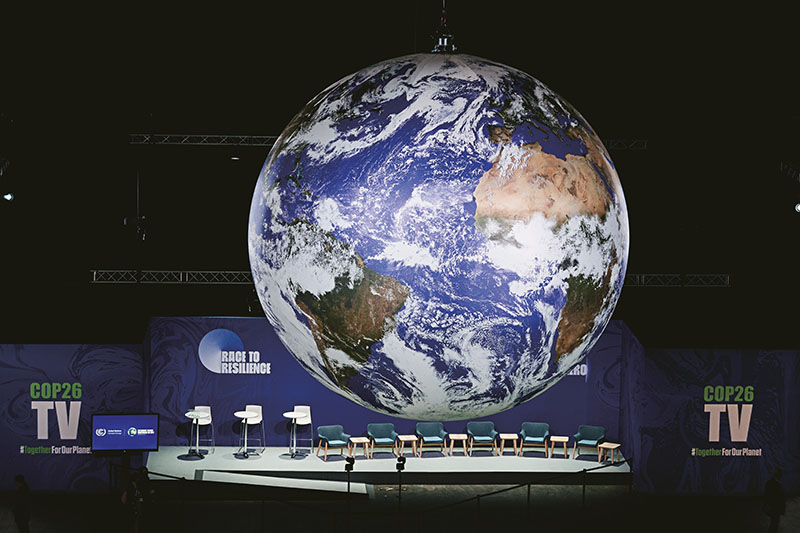 In two weeks of contentious negotiations Oct. 31 to Nov. 12 in Glasgow, nearly 200 countries hammered out major agreements to counter climate change, including long-awaited rules for global carbon trading and new pledges on methane gas emissions, climate financing and support for developing countries. A joint action deal between China and the United States added an encouraging development.

At the same time, experts said the Glasgow talks made only incremental progress that will be inadequate to truly limit potentially catastrophic global warming. Most notably, a last-minute change in the 11-page final accord, being called the Glasgow Climate Pact, watered down crucial language on coal usage. By replacing “phase out” with “phase down” for coal power, the document disappointed many on addressing the single biggest source of greenhouse gas emissions.

The agreement “reflects the interests, the contradictions and the state of political will in the world today,” said U.N. Secretary-General António Guterres at the close of the conference. “It is an important step but is not enough.”

Guterres called for ending fossil fuel subsidies, phasing out coal, putting a price on carbon, protecting vulnerable communities, and delivering on a $100 billion annual climate finance commitment. It is time to go “into emergency mode,” he said.

The Glasgow meeting, known as COP26 for 26th conference of the parties, completed a rulebook for the landmark Paris Agreement reached six years ago at a similar summit. The outcome kept the Paris targets alive, offering a chance of limiting global warming to 1.5 degrees Celsius, the European Commission said in a statement after the meeting.

The summit reviewed countries’ deliveries on climate commitments made in Paris and proposed new targets. Indian Prime Minister Narendra Modi promised to cut the nation’s emissions to net zero by 2070, the first time India has set such a target, although missing the 2050 goal adopted by many countries. Brazil pledged a 50% emissions cut by 2030 from 2005.

China’s goal for carbon neutrality is 2060, while the U.S. and the European Union aim to hit net zero by 2050.

Participants agreed to conduct another round of climate talks in November 2022 in Sharm el-Sheikh, Egypt, with stronger commitments to address climate change.

Zhao Yingmin, China’s negotiator and a deputy minister of environment, said the Glasgow meeting made progress in addressing some of developing countries’ longtime concerns such as capital and technology support for adapting to climate change, but there are regrets and disappointments, especially on the delayed delivery of $100 billion of annual funding pledged by developed countries.

“It doesn’t fully satisfy everyone,” said Patricia Espinosa, the U.N. climate secretary, in an interview with the Associated Press. “But it brings us forward. It’s a good compromise.”

The more challenging issue after the Glasgow conference is how and when countries will put their climate commitments into action, experts said.

The world is running out of time as current commitments made by individual countries still fall far short of what is needed to meet the goal of limiting global warming to well below 2 degrees Celsius set by the Paris Agreement, according to the U.N.

Here is a review of key achievements and comprises from COP26:

Fleshing out the Paris Agreement rulebook

One of the biggest achievements in Glasgow was completion of technical negotiations on the rulebook for the Paris Agreement.

Negotiators in Glasgow settled long-pending issues for implementation of the Paris Agreement, including transparency and reporting requirements for countries to track progress against their emission reduction targets. More importantly, nations agreed on key arrangements under Article 6 of the Paris accord, which set out the mechanisms of international carbon markets to support further global cooperation on emission reductions.

But how the market mechanisms should be designed and what rules global carbon trading should follow remained thorny issues.

“There are many complicated reasons behind (the negotiation), involving interests of different parties and various industries of countries,” said Chai Linmin, a senior official at China’s National Center for Climate Change Strategy and International Cooperation.

One of the most contentious points was on the question of whether credits could be claimed by both the country selling them and the country buying them. Brazil has been a major supporter of a so-called “double counting” system that others opposed.

A proposal by Japan in Glasgow outlined measures to avoid double counting and gained backing from Brazil and the U.S.

Another achievement in Glasgow was the agreement on how to carry forward carbon credits created under the old Kyoto Protocol, the Paris Agreement's predecessor, into the new system.

Supporters argued that legacy credits were made with costs and should be transferred, while opponents warned that flooding the new market with old credits might undermine emission reduction efforts.

The final accord sets Jan. 1, 2013, as a cut-off date, with credits issued before that date not being carried forward.

Countries also agreed to a 5% fee for new credits issued to be collected to go toward an adaptation fund for developing countries.

The arrangements agreed in Glasgow set up a basic framework for the market, but it will take more time for detailed trading conditions to be worked out, said Qian Guoqiang, deputy general manager of Beijing-based think tank SinoCarbon. It may take two or three years for the market to start operating, and more practical details will be settled later, Qian said.

COP26 reinforced a goal of limiting the global temperature rise to 1.5 degrees C, a threshold above which scientists say the consequences of climate change will be most dangerous.

The 2015 Paris Agreement commits countries to limiting global average temperature rise to well below 2 degrees C compared with pre-industrial levels and aim for less than 1.5 degrees C. In succeeding years, scientists from developed countries have advocated raising the limit to 1.5 degrees C.

Developing countries including China have been hesitant about the more-ambitious goals. According to a study by the U.N. Intergovernmental Panel on Climate Change, limiting global warming to 1.5 degrees C would require global net human-caused emissions of carbon dioxide to fall by about 45% from 2010 levels by 2030. Carbon dioxide is the main greenhouse gas.

The goal is pressing as the world has already warmed by around 1.1 degrees C above pre-industrial levels, according to U.N. data.

Compared with previous agreements, the Glasgow accord puts more emphasis on the urgency of holding the global temperature rise within 1.5 degrees C.

Countries’ current commitments will fall far short of achieving the goal of keeping global warming to 1.5 degrees C, said the Glasgow document. Countries agreed to review and assess their commitments at next year’s conference in Egypt to put the world on track to complying with the 1.5 degrees C limit.

The hope of holding warming to 1.5 degrees C is still alive, said Britain's Alok Sharma, a member of Parliament who served as president for COP26. But it “will only survive if we keep our promises, if we translate commitments into rapid action, and if we deliver on the expectations set out in this Glasgow Climate Pact to increase ambitions to 2030 and beyond,” he said.

The Glasgow pact for the first time explicitly addresses the need to end fossil fuel use to combat climate change. But the final deal also included a last-minute change to soften critical language on coal power, underscoring the bitter negotiations around the issue.

Despite that disappointment, COP26 sent a clear signal that the era of coal power is moving toward an end, said Jennifer Morgan, executive director of Greenpeace International.

Efforts to reduce other greenhouse gas emissions were also highlighted during COP26. More than 100 countries have now joined a U.S. and E.U.-led coalition to cut 30% of methane gas emissions by 2030 from 2020 levels, marking a major step to limit the second- biggest contributor to climate change behind carbon dioxide.

The coalition includes countries that account for nearly half of global methane emissions and 70% of global GDP.

Globally, the oil and gas industry is the biggest source of methane emissions, and agriculture is another top contributor, the EDF’s Zhao said.

“In China, methane emissions mainly come from gas burning in the coal mining industry, which poses greater difficulties to reduce emissions compared with the oil industry,” Zhao said. The best solution is to reduce coal use, Zhao said.

China and the U.S. pledged to work together to enhance climate action over the next decade in a joint declaration announced at the summit. The project includes China’s first promise to address methane emissions.

According to the joint declaration, China and the U.S. plan to cooperate “to enhance the measurement of methane emissions, to exchange information on their respective policies and programs for strengthening management and control of methane, and to foster joint research into methane emission reduction challenges and solutions.”

The two nations also plan to establish a joint working group that will meet regularly to enhance concrete actions, which may include continued policy and technical exchanges and meetings of governmental and nongovernmental experts.

The joint declaration is a “promising sign” that the world’s two largest greenhouse gas emitters will continue working together to tackle the climate crisis, said Fred Krupp, the EDF president.

The pledge indicates that China and the U.S. avoided the worst scenario of climate decoupling, Greenpeace’s Li said. But the world is unlikely to rely solely on the bilateral efforts of China and the U.S., Li said.

In 2009, developed countries agreed to provide $100 billion a year to address the needs of developing countries. But the promise hasn't yet been completely fulfilled.

According to September data from the Organization for Economic Co-operation and Development (OECD), developed countries in 2019 provided $79.6 billion of climate funding to developing nations, up from $78.9 billion a year earlier.

The Glasgow pact cites the need to mobilize climate finance “from all sources to reach the level needed to achieve the goals of the Paris Agreement, including significantly increasing support for developing countries beyond $100 billion per year.”

But details about the funding arrangement and a clear definition of climate financing are still absent from the final text.

Xiong Xiaoping, a senior climate policy researcher at the Development Research Center of China’s State Council, expressed concern over the outlook for funding. Amid pressures of economic recovery and deepening inflation, developed countries will face more difficulties in fulfilling their pledges, Xiong said.

Poor countries have for years called for more financial compensation for climate-linked “loss and damage,” a term referring to destruction already being inflicted by climate change.

Negotiators in Glasgow failed to reach consensus on setting up a fund to compensate countries for climate-linked loss and damage, but they agreed to launch an office under the U.N. to further study the issue.

Funding from developed countries is expected to offer important support to the developing world, especially the most vulnerable countries and small island states, to better adapt to and mitigate climate impact.

A recent study by the U.N. Environment Program showed that developing countries’ annual costs for adaptation may reach as much as $300 billion by 2030 and further rise to $500 billion by 2050.

But compared with investments in emission reduction projects, financing to support climate adaptation has been limited. An OECD study showed that only 25% of the nearly $80 billion of climate funding provided by developed countries in 2019 was used to support developing countries’ adaptation efforts, including projects to respond to extreme weather incidents. The major part was spent on clean energy and emission reduction infrastructure projects.

The Glasgow agreement urges developed countries to at least double their collective provision of climate financing for adaptation to developing nations from 2019 levels by 2025.