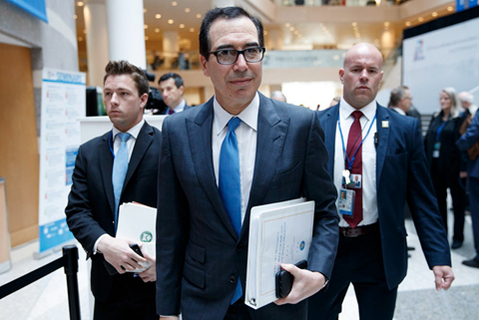 The United States and China have largely agreed on the issue of trade deal enforcement, one of the thorniest topics in negotiations to end the trade war, U.S. Treasury Secretary Steven Mnuchin said over the weekend.

China and the U.S. agreed that their deal will have “real enforcement on both sides, including a detailed enforcement office on both sides with significant resources,” Mnuchin said at the conclusion of the spring meetings of the International Monetary Fund and World Bank in Washington. Mnuchin said the two sides agreed on certain bilateral commitments.

Chinese and U.S. officials concluded a ninth round of trade talks in Washington in early April. A spokesman at China’s Commerce Ministry said last week that officials made progress in issues including intellectual property rights protection, technology transfer, nontariff barriers, services trade, agriculture, trade balance and enforcement. The two sides will maintain close contact to push toward a final deal, the spokesman said.

Mnuchin said the two countries are “getting close to the final round of concluding issues.” He said he and U.S. Trade Representative Robert Lighthizer would chat with Chinese counterparts by telephone in the coming week to discuss a narrowing set of issues.