Czech Mate for a Euro Basher 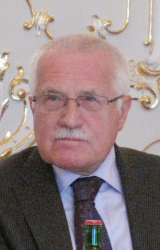 (Prague) – It's been almost seven years since the Czech Republic's European Union accession, and yet the presidential palace at Prague Castle has never flown the EU flag beside the Czech national banner.

That's because Vaclav Klaus, the Czech president since accession in 2004, is a staunch euroskeptic. He lives up to that reputation by refusing to fly the EU flag – and much more.

Klaus' rejection of EU integration goals stalled ratification of the Lisbon Treaty, through which the bloc's institutions aim to streamline decision-making. Even after he signed the treaty in December 2009 – becoming the last EU leader to add his signature to the document – Klaus continued to oppose the treaty because he said its "enforcement will limit the Czech Republic's sovereignty."

Klaus is not an isolationist. He has actively promoted the 20-year-old Visegrad Four organization, whose members include his country, Hungary, Poland and Slovakia, to protect and pursue regional common interest even while each country worked toward entering and adjusting to the European Union.

The 69-year-old Klaus is an economist and vocally enthusiastic about the free market economy. He was born into a comfortable family in Prague and educated in the former Czechoslovakia, Italy and the United States. He has published more than 20 academic books on topics ranging from economics to politics and social affairs.

But he's been most successful as a politician, serving as a finance minister, prime minister and president since the 1989 Velvet Revolution and through the 1993 breakup of Czechoslovakia, which created the Czech Republic.

Klaus has long been an outspoken opinion leader in debates of concern to the international community. He's taken contrarian positions on European integration, the euro currency and global climate change, which he's called "a false myth" that will restrict personal freedoms, democracy and the free market.

On November 10, Klaus agreed to an interview with Caixin and other Chinese media outlets. He discussed his views of the global financial crisis and European integration, as well as bilateral trade relations between his country and China. Excerpts follow:

Q: After the Greek sovereign debt crisis, some predicted that several European countries including the Czech Republic might undergo a similar crisis. How did your government prepare?

The Greek crisis may have been because the Greeks joined the euro zone, which I think it was a mistake both for the euro zone and Greece. Greece was definitely not in a position to be a member of the euro zone, and it took some years for the problems to show up. A year ago, they became visible.

The euro is not the Czech Republic's currency. We still have the Czech koruna. The Czech koruna would have signaled the problem years before the crisis, whereas Greece and lots of others in the euro system didn't get such warning signals about problems. So this is really a problem of the euro zone. Without the euro, the Greeks would have fought problems with exchange rates, interest rates, monetary policy, and Greece would not have had such problems. Greece is being punished for premature acceptance of the euro.

We often talk about financial and economic crises, but there is no financial crisis in this country at all. The Czech Republic is one of the few countries that did not put money – not one Czech koruna – into its banking or financial system. So we are among the few countries in the world where the government and the central bank were not forced to offer subsidies to the banking system. For us, the economic crisis in the real sector was basically imported, because major partners in the euro zone lost imports and then created some problems for us.

Q: Do you see any further stability risks for the European economy that the euro may create? What are your expectations for the euro zone?

Klaus: Yes, I believe the euro is one reason for sluggish economic growth. On the other hand, I suppose we will survive. But the costs will be very high.

Q: Does that mean the Czech Republic will not join the euro zone?

Klaus: The Czech Republic signed the EU accession treaty seven years ago. One item was that we would be part of the euro zone; there was no choice. But it's important that we signed it without giving a date. So we can join in the year 2017 or 2057 or 3011. By then, the euro may not exist.

There's no timeframe for this obligation. But for now, there is no group in this country – neither the government, nor the central bank, nor the opposition – that suggests that this country should join the euro zone. And I will be the last to agree that the Czech Republic joins the euro zone.

Q: Do you think European integration is on the right path?

Klaus: I disagree with the fact that European integration has changed from integration to unification. Please understand that integration still basically concerns a horizontal level, while unification starts at a vertical level.

Q: What will be the focus of trade and investment in the future between China and the Czech Republic?

Klaus: I wish I knew the answer. If so, I would be a businessman not a politician. I don't want to endorse an individual business or items. As you know, the Czech Republic is an industrialized country. We used to be the most industrialized country in the Austro-Hungarian empire more than 100 years ago. Even now, if you take a look at the labor force numbers in industry, we have the highest proportion of people working in industries in Europe.

So this is our specialty. It used to be heavy industry, machinery, sophisticated industry. The Czech Republic is very successful with cars. As I know, Skoda Auto has started assembling in China and Czech's largest financial group PPF has started cooperation in China.

In terms of the trade imbalance, many say there is a flood of products made in China. I say this is true, but on a competitive basis. We are a very open economy, and we wish the Chinese economy to be as open as ours. In China, there are still formal and informal trade barriers.

Q: How does the Czech government evaluate foreign investment in its economic growth? Will there be incentives to boost investment cooperation between China and Czech?

We have never had a problem with a lack of foreign investment. I think (incentives) are a big mistake for all countries in the world. I am very unhappy that the Czech Republic has also created some incentive policies. I don't want them, but they are here.