Cloud Computing on the Far Horizon 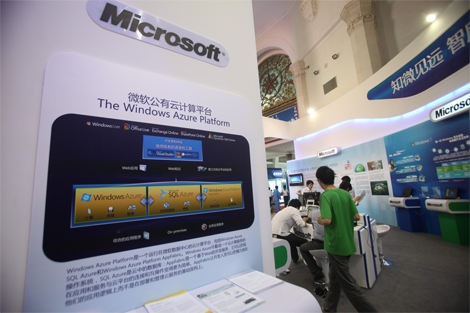 Where there's thunder, there's lightning, but cloud computing in China may still require more than just the rumble of heavy government finance to become a cutting-edge sector of innovation. Both Shanghai and Beijing authorities have begun to jostle side-long for the title of the world's center of cloud computing, with billions of yuan in government funds at stake.

In the meantime, the mere mention of cloud computing, or the use of online computing networks, is still enough to send shares soaring. One Chinese systems integration company, Inspur Electronic Information Industry, saw its shares rise by nearly 40 percent in a single week following a government announcement on the industry in mid-October. The Ministry of Industry and Information Technology (MIIT) and the National Development and Reform Commission (NDRC) issued a notice that Beijing, Shanghai, Shenzhen, Hangzhou and Wuxi had been designated as cloud computing innovation sites.

Companies like Inspur, however, have been cautious to make promises on the current state of the industry. In its May shareholder meeting, the company announced that high-end technologies in the server industry still lie in the hands of global companies like IBM. Cloud computing is only a concept, the company said, and Inspur had not developed any related products.

But critics have said that government involvement might not only amplify cloud computing's inherent data security and privacy issues, it could also result a massive waste of investment without the right technological breakthroughs.


What Is Cloud Computing?

Six years ago, online retailer Amazon.com purchased a set of new IT equipment in response to peak demand and used it to build its own e-commerce system. Because most of the equipment often sat idle, the company developed a procedure for large-scale server virtualization, and leased the equipment out to others in a piecemeal manner. Soon after, Amazon Web Services, a company specializing in cloud computing services, was born. With an annual income of approximately US$ 100 million per year, customers include Eli Lilly, The New York Times and other well-known companies.

In cloud computing, large network service providers such as Amazon or Google provide computing services in a centralized manner like utilities companies provide water or electricity. For users, the model eliminates the trouble of purchasing and maintaining their own servers, which they instead access from the "cloud" through network service providers. Google was the first to propose the "cloud" concept and theory, and IBM later made a high-profile entrance into the field.

Cloud computing has proven to be very successful business model. "The benefit is convenience for users. Manufacturers can also sell their products more easily," said Zhang Yunquan, director of the Parallel Computing Laboratory of the Chinese Academy of Sciences.

In August, Shanghai presented its "Sea of Clouds Plan," with an expected investment of 3.12 billion yuan, which would drive new information service operation revenues of 100 billion yuan and establish Shanghai as the national cloud computing technology and services center.

Cloud computing has indeed contributed to lower computing costs, but its actual capacity to deliver new services has been criticized, and many question the security of data.

From a cost and maintenance perspective, cloud computing could reduce the overall cost of IT investment, but security issues are the main obstacle to its development, said Jiang Shui, vice president of iSoft Infrastructure Software, which is currently researching cloud computing virtual resource management.

But some also question the cost benefits of cloud computing. "Why are China Mobile and China Telecom so enthusiastic? On the costs of cloud computing, communications costs are actually the highest, but coincidentally they've been removed from the costs," said Xi Zili, director of the Shanghai Supercomputer Center.

Xi says that large global companies have come to understand the rules that govern the behavior of the Chinese government, and they are now shortchanging the government to influence the direction of policy, with the goal of establishing cloud computing centers to take home government money. In fact, Chinese companies aren't gaining much from the situation – the vast majority of software and hardware all come from abroad.

One researcher says local government promotion of cloud computing plans have come from impulse, not prudence. "It would be best if companies explored (the industry) themselves. It's very risky for the state to do such things. Some places may succeed, but there will be great waste."