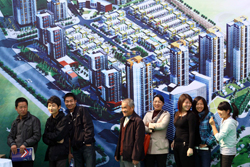 (Beijing) - After a long road riddled with twists and turns, the much anticipated launch of the Chinese version of Real Estate Investment Trusts (REITs) has been suspended, Caixin learned from various sources.

"Research on the plan for REITs was halted around late September and early October," a finance official from a local government told Caixin. However, a source close to the central regulator said that plans to go through with a Chinese version of REITs still exists, but that significant work still needs to be done on reviewing implementation and regulation by high-level government agencies.

In early 2010, Tianjin and Shanghai submitted proposals to the central bank and asked the State Council to approve separate REITs plans tied to subsidized, low-income housing. Their plans coincide with a central government initiative to push forward subsidized housing construction and rising market expectations on the launch of REITs. However, no progress has yet been announced since then.

Since it was first suggested in 2007 by the Central Bank, China's REIT progress has been slowed by upsets including the sub-prime mortgage crisis in the United States, the global financial crisis and the Chinese government's moves to regulate the real estate market.

In late 2009, the Central Bank convened a meeting with 11 ministerial agencies to discuss the issue of REITs and set up a working team. According to the plan, policy drafting was to be completed by September 2009. A pilot program for REITs was set to be launched in Beijing, Shanghai and Tianjin by the end of 2009.

A lawyer close to regulators told Caixin that with the tightening policies on property developer financing activity since October 2009, the State Council has postponed the launch of REITs to coordinate property market policies with recently-issued property regulations.