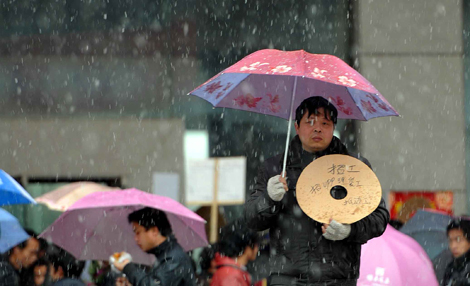 Between the lines of help-wanted posters plastered on walls in Chongqing's bus and train depots were hints of a deep anxiety shared by employers in manufacturing regions across China.

Millions of migrant workers who left live-in factory compounds in cities and eastern provinces to celebrate the annual Spring Festival holidays in early February were slow to return to their jobs afterward. Some have apparently decided never to return.


Labor officials reported a sharp decline in the number of workers migrating to factory regions after the holidays from their homes in small cities, villages and rural areas across the country, particularly from the inland provinces of Sichuan, Hubei, Hunan, Hebei, Anhui and Henan.

Hubei alone this year expects 1 million fewer of its locals to leave the province for distant jobs. And on the flip side of the migrant worker equation, the province's economy and technology commission said 11.2 percent of Hubei's industrial enterprises had suspended operations in mid-February due to worker shortages.

Farther south, factory-heavy Guangdong Province reported about 2 million unfilled job slots. And in Chongqing, where major electronics companies including Foxconn and Inventec are expanding operations, employers are reportedly short by about 100,000 workers.

A central government Ministry of Human Resources and Social Security report released before the holidays predicted a 10 percent labor shortfall this year for employers in the heart of China's processing factory region, which includes Guangdong, Zhejiang and Fujian provinces.