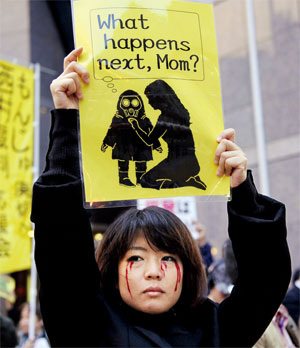 More than a month after an earthquake and tsunami, Japan was still battling to contain a subsequent nuclear crisis. And low-level radioactive dust and seawater had been detected in several countries in the Asia-Pacific region.

Responses to nuclear threats must be transparent and rational, and this disaster offers a reminder that timely, accurate and open disclosure of information is critically important for any disaster response, as well as international coordination efforts. It also helps prevent panic.

The Japanese government has been criticized by its own people and others in the region for a chaotic, ineffective response to the crisis. On April 6, Japanese Chief Cabinet Secretary Yukio Edano admitted giving "insufficient explanations" to neighboring countries about radiation leaking into the sea.

The government's confusion and tardiness in relaying accurate information has tarnished Japan's global image as a prudent and trustworthy government. Assurances of safety with statements such as "there is no risk" and "it's not a big problem" were later found unreliable, dealing a serious blow to confidence in the government that may be more damaging than the environmental harm.

Information disclosure in a crisis requires a system for obtaining first-hand details and data, and then disseminating it to the public and all affected parties.

Shortly after the earthquake March 11, Tokyo Electric Power Co. (Tepco) said it was successfully keeping the reactors safe at the Fukushima Daiichi nuclear power plant. Japanese Prime Minister Naoto Kan said there was no danger of a nuclear leak. But the government ordered an evacuation of residents within three kilometers of the plant that same night. And over the next few days, the evacuation zone was gradually extended to 30 kilometers.

These conflicting messages reflected not technical difficulties but a lack of willingness to act promptly, based on self-interest rather than a concern for avoiding the disaster's worst outcome.

Accuracy and speed were problematic as well. Tepco was several hours late in reporting a problem at reactor No. 1 to the government and public. The company's attempt at a press conference to downplay the severity of the situation angered the Japanese people. Neither was the International Atomic Energy Agency (IAEA) promptly informed about developments; at one point the agency's officials asked the media for urgent information about plant explosions.

A Japanese law enacted in 1999 says the government should take the lead in handling a nuclear crisis, through a government management task force headed by the prime minister that directs and coordinates all government agencies. To that end, a government team headed by Kan was assigned to oversee the crisis, with 20 government officials moving into Tepco's Tokyo office, although on-site crisis handling remained under Tepco. This arrangement made it difficult for Kan to coordinate relief work by the Self-Defence Forces, police and fire departments.

On April 3, Edano announced plans to set up an independent commission to investigate the crisis as well as relevant government departments and Tepco.

The crisis in Japan holds lessons for other countries, especially China, a relative latecomer in nuclear power development. The Chinese government cannot afford to be a mere observer of the unfolding disaster in Japan.

Any government is obliged to disclose timely information to its people in a crisis. And the media, non-governmental organizations and international agencies should have the right and channels for monitoring the government under these conditions.

Japanese citizens, businesses and NGOs have stepped up to the task, filling in gaps left by the government's failings. The crisis also occurred against the backdrop of Japan's advanced legal system and institutional framework.

The Japanese government may be faulted for an inadequate response to the disaster, or for allowing murky lines of responsibility between the government and a power company. But at least it has some regulations, such as a 1957 law on nuclear materials, nuclear fuel and reactors, and a 1999 law on nuclear emergency responses.

In these areas, China has a long way to go. China is a member of the IAEA, but it has yet to fill many legal blanks in terms of nuclear and radiation safety.

Japan's disaster prompted Chinese authorities to order a comprehensive safety review at its nuclear facilities, including those under construction and as-yet approved. Rightly so, China's nuclear industry needs this kind of overhaul. Now, information about safety inspections at nuclear plants should be disseminated beyond the industry, while the industry's safety planning should be a transparent process.

Furthermore, people should have a say in drafting laws regulating the nuclear power industry, namely the atomic energy act and nuclear safety act.

At this stage in its development, China cannot do without nuclear energy to supplement non-renewable energy sources and confront climate change. We are still working on the effective use of solar power and other forms of alternative energy. True, no one can guarantee that a nuclear accident won't happen. But nuclear phobia is unacceptable.

At the same time, nuclear power must be safe: We can't embrace it blindly. Its use must be framed by reasoned, open debate and supported by science and sound governance. Emergency plans must be designed to protect the public and provide accurate, timely information in a crisis. In this way, advanced technology as well as sound institutions can help us harness nuclear energy – safely.