Getting to the Bottom of the Alipay Dispute 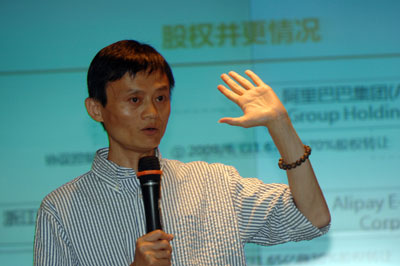 The decision—which Ma made without the approval of the Alibaba board and over the objections of shareholders—has since ignited a nationwide discussion about the reliability of China's investment environment and the responsibility Chinese entrepreneurs must pay to their foreign contracts.

Yahoo and Softbank, two leading shareholders of Alibaba, had been much sought-after in the early stages of Alibaba's development, but felt pushed out as the firm grew larger and more mature. Having witnessed the dramatic events surrounding what occurred between Alibaba and Alipay, some international investors have expressed concern over the reliability of overseas-listed Chinese companies.

"U.S.-listed Chinese stocks had a China discount before the start of this century, which has recently become a China premium," a domestic venture capitalist said. "This incident may cause it to revert into a China discount."

On May 26, the central bank announced its first batch of 27 license recipients under its new scheme, with Alipay appearing on the list as expected.

China's third-party payment services first came on the scene in 1999, but the companies did not come to the fore until Alibaba introduced Alipay in 2005 to support its growing online retail site Taobao.com. By complementing each other, Alipay and Taobao quickly reached new heights as the popularity of online shopping exploded.

China's third-party transactions totaled 1.1 trillion yuan in 2010, with Taobao accounting for 49 percent, according to the Beijing-based research firm Analysys International.

But the rapid growth of the third party payment market also prompted the central bank to strengthen its regulation over the sector. In June 2010, the People's Bank of China issued a new order requiring domestic non-bank payment operators to apply for licenses in order to remain in business. Foreign-funded license applicants would be subject to separate review by the central bank and approval from the State Council.

At the time, an official with the China Banking Regulatory Commission told Caixin that given the scale of its third party payment business, Alipay could probably pass through the new requirements with flying colors. "Talks of Alipay closure are purely alarmist," since government agencies would no doubt recognize the company's legal status, said the official.

But Ma's own risk assessment went in the opposite direction, prompting him to transfer Alipay's equity to a domestic company under his control.

Ma was taken aback by Hu's latest editorial for Caixin Century, "Jack Ma's Mistake," which criticized Ma for violating contractual principles when he transferred Alipay away. In a two-hour text message exchange with Hu, Ma described how the Alipay saga played out. Ma ended the conversation vowing to "give others and myself a better explanation."

He stuck to his word. Two days later, he convened a press conference together with Alipay CEO Peng Lei and CFO Jing Xiandong in Hangzhou, where Alibaba is based, and provided a considerably more complete