Greenprint: A New Approach to Cooperation on Climate Change 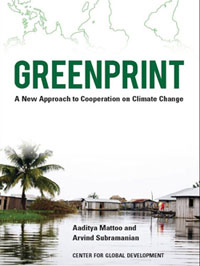 We now know that there is a global climate emergency. We also know that there is little appetite for concerted global action. Even in the unlikely event that there were meaningful international cooperation on climate change, the rich world cannot afford to make the sorts of financial contributions that were talked about a decade ago.

In their slim book, Aaditya Mattoo and Arvind Subramanian make a case for action led not by the rich West but by the giants of the developing world. The biggest carbon emitter is China; other large developing nations – India (third largest), Brazil, and Indonesia—are also significant sources of greenhouse gas emissions.

These developing giants have the most to lose from climate change. Developing countries tend to be in or near the tropics, where higher temperatures will cut farm yields more quickly. They typically have higher population densities, meaning that water shortages or weather-related calamities have an outsize effect. Their lower per capita incomes give them less of a buffer to adapt to disruptions. One estimate is that a 2.5 percent temperature increase would see India's harvest drop a staggering 38 percent, compared with a fall in the U.S. of 6 percent.

The debates over responsibility for climate change revolve around thorny issues. These usually center on the ideas of historic responsibility; the ability to pay; the need to preserve development opportunities (giving the poor a chance to catch up with the rich); the ability to bear adjustment costs; and the idea of equal per capita emissions.

This debate sometimes verges on the metaphysical. Today, the issue is not whether China and India can afford to take mitigation steps: can they afford not to act decisively? These giants of the developing world need to decide that they want to take a leadership role. China, India and others in the developing world have long pointed to the legacy of two centuries of carbon emissions by the now-rich world. Why, they ask, should the rich now kick the ladder down behind them by prohibiting the developing world from emitting a similar amount of carbon?

Greenprint takes a new look at the issue. Mattoo and Subramanian argue that the issue of development should be separated from the right to emit carbon. "What is fundamental is not the right to pollute; it is people's ability to grow and become richer." The focus needs to be on technological solutions, led by the rich world but backed by funding from the developing world.

Greenprint's central ideas are two: rich countries should commit to making deep cuts in carbon emissions. The best way to do this is to set a price of carbon high enough to bring per capita consumption down from 20 tons annually per person now to two tons in all industrialized countries by 2050. Developing countries would contribute to a global fund for green development and allow some carbon-based taxes to be imposed on their exports. Phasing out fossil fuel subsidies would be a good move, too: the OECD says that the removal of energy subsidies in non-OECD countries would cut global greenhouse gas emissions by 10 percent over a business-as-usual scenario. China's emissions would be cut by more than 10 percent and India's by almost 25 percent.

Sadly, for all the impressive research and thought-provoking ideas, this is a book that the real world has left behind in the time since work started. With Europe struggling for survival and the U.S. suffering from anaemia, the idea of a global climate deal is unimaginable. It is every country for itself.

Yet Mattoo and Subramanian have added an important new dimension to the politics of greenhouse gas emissions. The focus on separating the right to grow from the right to pollute; the attempt to tease out the various strands of responsibility in order to find a political and philosophical underpinning for consensus; and the emphasis on a technological revolution are all important ideas.

Fortunately, there is more good news than Mattoo and Subramanian let on. Though they mention in passing a study that estimates 68 percent of the increase in low-carbon energy generation from 2002-08 was in developing countries, they underestimate the scale and scope of the low-carbon revolution in which the developing world, led by China and India, is playing the most significant role.

For their own reasons, mostly to meet domestic political concerns, China and India are among the global leaders in a variety of clean-tech industries, from solar and wind to electric vehicles. It remains to be seen if these two giants, who between them have more than one-third of the world's people, can use their strength in low-carbon technologies to wean their dependence on coal. But it is largely on the speed of this change from coal to clean-tech that will determine how fast the Earth warms.

A global fund and binding international pledges to cut carbon outputs would give efforts to slow climate change more force. In the meantime, absent leadership from the rich world, there is little left but the hope that China and India will act, and act more quickly than they have done to date, to speed up the transition away from coal.

Mark Clifford is Executive Director of the Asia Business Council and has authored or co-authored four books on Asia, including Building Energy Efficiency: Why Green Buildings Are Key to Asia's Future, Troubled Tiger: Businessmen, Bureaucrats and Generals in South Korea and, with Supachai Panitchpakdi, China and the WTO: Changing China, Changing World Trade.