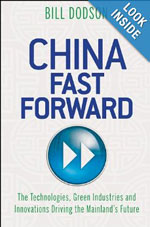 "China today is a train traveling through a lightning storm. None of us are spectators; all of us are passengers." Bill Dodson opens up his book with this chilling weibo post, written in the immediate aftermath of the July 2011 high-speed train collision that killed 40 people and injured hundreds of others.

Dodson contends that the deadly collision involving the sleek emblem of Chinese modernity will prove to be a turning point in the relationship between the Chinese state and its people, a harbinger of a new and perhaps better era. The old social contract has frayed, he writes, and the accident, much like the Sichuan earthquake of 2008, will force fundamental change: "In 2011 China's central planners understood they had reached a tipping point in the nation's economic and social development."

A provocative thesis; yet two years on from the accident it is not clear how or whether the train crash fundamentally changed the country. The trains run a bit more slowly and a powerful former railways minister has been brought down on corruption charges, but the basic structure of China's state-directed hyperkinetic economic development remains firmly in place, even as GDP growth dips to what by Chinese standards is a relatively modest annual rate of seven percent.

Dodson himself seems unable to decide what, if anything, has been transformed. But he succeeds is in pointing out – in quick-fire succession – some of the flaws in the country. It lacks creativity. The China brand is lousy. Civil society and charitable works are embryonic and often barely tolerated by the government. Should we be concerned about Chinese prowess? Or is it a paper tiger?

One of his most interesting discussions is that of "Brand China". Dodson quotes the work of Andrew Hupert, an adjunct professor at New York University's campus in Shanghai. China, says Hupert, unwittingly is projecting five unattractive core values: it is opaque and mysterious; it is corrupt; it is an angry country ("China's feelings have been hurt"); the game is fixed; and China is rife with product safety and quality problems.

Dodson also takes on the very short-term mentality of Chinese corporations and goes some way to demolishing the myth of the patient strategic Chinese thinkers. Rather than a long-term vision, Chinese management strategy instead involves anticipating and riding trends in a fast-changing marketplace and then following up with a ruthless grab for market share designed to drive out competitors.

Dodson also takes us on a quick tour of China's myriad energy problems as well as its efforts to nurture alternative energy such as solar and wind. Wind turbines aren't connected to the grid, the installed base of solar panels is small, and the batteries powering the country's much-vaunted electric vehicles (and electric bicycles) are poisoning the villages where they are manufactured. The water situation is dire, made worse by flawed policies.

Bill Dodson has the sort of love-hate relationship with China that will be apparent to many long-time residents of the country. Many things about the country  irritate him. He is deeply sceptical about the ability of the country to move forward and worries that it will be yet another failed dynasty:

[C]urrent-day China... risks becoming annotated as just another dynasty in a long history of cyclical feudalism, albeit one with digital characteristics.

Despite a book filled with often searing criticism, Dodson dearly hopes that China will somehow pull it off... yet despairs that it won't. This is a rapidly-paced, even scattershot book, more of a quick tour than an in-depth visit. For anyone familiar with China, most of these arguments will not be new. For anyone who knows less about China or who thinks that China's rise is unstoppable, there is much here to recommend.

Mark L. Clifford's latest book is Through the Eyes of Tiger Cubs: Views of Asia's Next Generation (2011). He is the executive director of the Asia Business Council.