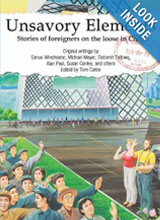 The name of this book – and title of its final essay – is taken from an unofficial Chinese term for foreigners, conjuring up an image of badly-behaved foreign undesirables, intent on causing trouble and indulging in illicit excess. In reality, the 28 writers in this collection of real-life stories about China are mostly anything but. Unsavory Elements features a range of diverse experiences in the Middle Kingdom, from being outhustled by locals in quirky business ventures to sneaking onto trains to get from Xinjiang to Hong Kong, to working in an orphanage with disabled children.

There are literary heavy-hitters like Peter Hessler, Simon Winchester and Jonathan Watts who need little introduction, but almost every contributor is an accomplished author, journalist or photographer. Even a former Shaolin monk is in the mix: Matthew Polly, who was the first foreigner to study at the famed kung fu temple in Henan. The stories span China, from Beijing to Yunnan to Tibet to Henan, giving a more comprehensive glimpse of this vast country than just Beijing and Shanghai which dominate the media focus. The outcome is a depth and variety about the expat experience and life in China that is almost unsurpassed.

Hessler's piece features his typical thoughtful, measured prose, about a visit to the North Korean border at Dandong, in which he experiences regret at pummeling a thief who had broken into his hotel room one night. Mark Kitto, Mr. "Why I'm leaving China" himself, contributes a story about having a statue modeled after him in Moganshan. Kitto, an entrepreneur, attracted considerable attention last year with a magazine article about leaving China after more than 16 years. One of the more interesting stories is Jeff Fuchs' account of trekking the 3,000-mile Ancient Tea Horse Road in southwestern China. He meets one of the last surviving muleteers who transported tea and other goods by mules along this road, establishing, for at least an instant, a direct link with history and an old way of life that is little touched by modernity.

Several of the contributions provide a more nuanced and intimate understanding of life in China. Perhaps inevitably, a baijiu (strong Chinese rice wine) drinking "competition" is included. Derek Sandhaus's account, while hilarious, is far from just being about drinking heavy alcohol and getting drunk, but also emphasizes how important drinking is to socializing and maintaining relationships. Kaitlin Solimine's touching remembrance about her "Chinese mother", whose home she lived in as a high-school exchange student, illustrates a closeness that crosses cultural boundaries. Deborah Fallows's story gives an insightful look into how pervasive and nebulous rules permeate regular life in China.

East-West interaction is a common theme. Wacky events feature in stories like Rudy Kong's account of a hockey game that turns into an all-out on-ice brawl that leads to a drunken lovefest the next day with those same opponents. Both Alan Paul, author of Big in China, and Susan Conley, author of a bestselling memoir The Foremost Good Fortune, provide humorous, touching stories of helping their respective children cope with a new life in China. Aminta Arrington (author of Home is a Roof Over a Pig) touches on a more sensitive topic: a spat among kids over an alleged racist slight against Chinese.

The stories become a little less family-friendly towards the end where a near-maiming, prison life, prostitution and drugs are the main topics. Dominic Stevenson tells of his incarceration in a Chinese prison, something that few Westerners have ever experienced. Tom Carter, photographer and author of China: Portrait of a People, as well as editor of this book, writes a daring story, whence the book's title, about young prostitutes and a pathetic expat friend. Carter's tale of going to a low-class red-light street is both slapstick and bold, offering a sordid yet personal look into a shady environment that one reads about only in newspaper exposes of China officials, if at all.

There is a tendency to see China's international relations, personal as well as political, in strictly East-West terms. So while this is a laudable collection of writers, it could have been more diverse with the addition of more contributors from places other than North America or Britain. There is one South Asian and one Singaporean, but otherwise no other Asians or foreign-born Chinese, which could have added an extra dimension. The large number of writers results in a diversity of tone and pacing, but also seems to have required keeping the length of some of the submissions too short to make a strong impact.

Funny, poignant, and wry, yet never cynical, Unsavory Elements is a fine collection of stories that expose how fascinating and perplexing this rising nation is. It is also a good alternative to the considerable negativity found in much writing about China these days.

Hilton Yip is a writer based in Taiwan and former book editor of The China Post.