Shanghai 1937: Stalingrad on the Yangtze 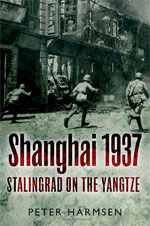 Who won World War II? We Yanks widely believe that we did, though that's silly, as by the time the USA declared war on Imperial Japan and Nazi Germany in early December 1941, the war was already a third over—Hirohito's holy warriors were already bleeding profusely in China, and Hitler's invasion of the Soviet Union had begun to resemble Napoleon's, one year after Hitler's own holy (airborne) warriors had lost the Battle of Britain.

The Russians, with some justification, believe they won the war. And so with the Chinese. And the question begs the answer: "no one—everyone lost." Hirohito's butchers were eventually expelled from China, at a cost of somewhere near 20 million of Chinese dead, although the number includes domestic atrocities such as Kuomintang Generalissimo Chiang's breaching the dykes of the Yellow River in June 1938, an act that eventually killed more than a half a million of his own people. The Soviets sacrificed even more of their own expelling Hitler's Wehrmacht, Luftwaffe and Einsatzgruppen, a death toll that includes Stalin's own-goal achievements.

Shanghai in the summer of 1937 was already tense, as the Japanese had invaded five years earlier and conquered most of China's northeast, and had at the same time instigated and won a mini-war in the "Whore of the Orient"—one of Shanghai's nicknames at the time. In her Pulitzer Prize-winning Stilwell and the American Experience in China, Barbara Tuchman reveals a gift for understatement in referring to the 1932 Shanghai bombing by the Japanese: "the first terror bombing of a civilian population of an era that was to become familiar with it."

The 1937 Shanghai battle was instigated by a bang and a whimper—similar to the murder of Archduke Ferdinand that had kicked off the Great War twenty-three years earlier. On  August 9, a lieutenant in the Japanese Marines, Oyama Isao, was murdered on the perimeter of the Hongqiao Airport, under circumstances that remain debated, an incident that Harmsen describes in gruesome detail.

The Japanese and Chinese subsequently argued yet again, with the Chinese quite reasonably suggesting that the Japanese occupation of the entire northeast of the country was unacceptable. No agreement was reached—indeed, none was possible, given the Japanese mass delusion about the divinity of their emperor and their divine mandate to conquer the region, encapsulated in their slogan hakko ichiu, "all the world under one roof," precisely analogous to the Nazi's concurrent lebensraum and the concept of "manifest destiny" in the USA in the 19th century.

The battle began on August 13 with street-to-street, small arms and mortar fire.

Harmsen, a two-decade veteran of east Asia, demonstrates a breathtaking command of the battle itself—from the 10,000 meter, panoramic view of the terrain and history, down to the platoon level—Japanese and Chinese grunts fighting, bleeding, starving and dying, and the types of knots that the Japanese used to tie their helmets on. In his final chapter, he illuminates the scope of the destruction:

The immediate vicinity of the North Train Station had been reduced to a sinister lunar landscape, the gutted buildings standing like rugged moon cliffs.

He quotes Edgar Snow, writing in 1941 about the battle:

It was as though Verdun had happened on the Seine, in full view of a Right Bank Paris that was neutral; as though a Gettysburg were fought in Harlem, while the rest of Manhattan remained a non-belligerent observer.

Both Shanghai and Stalingrad resembled a moonscape after the fighting, and both battles are largely forgotten by those Yanks who think we won the war. But "Stalingrad on the Yangtze" doesn't quite work as an analogy, because the Soviets turned back the Germans at Stalingrad (where they lost more than double the entire death count for the U.S. in WW II, as did the Germans), whereas the Battle of Shanghai marked the beginning of a series of defeats, and eight more years of slaughter, for the Chinese.

The consequences of the battle for both sides were catastrophic—Chiang's first aggressive stand against the Japanese cost him some 200,000 troops (nearly half the total U.S. death count in the war), including many of the best the Chinese had, although Chiang's corruption and incompetence were major contributors. The losses helped convince him and his cronies that they should "trade land for time", a policy that led to the subjugation and slaughter of millions more, for years to follow.

For the Japanese, the Battle of Shanghai marked the beginning of their end: devastating defeat and war crimes on an unimaginable scale (something a frightening number of the current Japanese Cabinet denies). They were shocked that their delusions and propaganda about the Chinese were wildly off-mark—that the Chinese did actually fight, and fight valiantly, and to the death. The Japanese lost about 70,000 in the battle, a death toll that was easily an order of magnitude more than they expected. And so the Japanese soldiers became infuriated at the Chinese—Harmsen quotes reservist Maebara Hisashi:

You Chinese made our brothers die in this terrible way. We'll make you pay! ... You wanted this war! It's your fault!

Harmsen goes on to describe how Maebara's platoon randomly captured three peasants and slowly, sloppily, beheaded them one by one, as revenge.

We did poorly today. Not a single head came off with just one strike. We'll have to do a better job next time.

The Battle of Shanghai led directly to the atrocities in Nanjing, which began on December 13—the Japanese folly of revenge, combined with theological delusion, drew them further and further into a wider war they could not possibly win. Consequences: millions of their own dead, ten times that many dead in other lands, and a legacy of war crimes that still devastates the region.

John D. Van Fleet is Assistant Dean for the USC-SJTU Global Executive MBA in Shanghai. His book, Tales of Old Tokyo, a romp through the city's history from 1853 to 1964, will be published early in 2014.