The Siege of Tsingtao 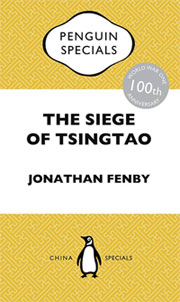 This year marks the centenary of the outbreak of the First World War; rhetorical flourishes have already begun comparing the current Asian geopolitical situation to Europe in months before the assassination in Sarajevo. Japanese Prime Minister Shinzo Abe might not have been so quick to invoke 1914 in regard to China's relations with its neighbors had he first read Jonathan Fenby's new book The Siege of Tsingtao.

And at less than 70 pages—I read it on a single to-and-from commute to the office—there is really no excuse not to.

Tsingtao was the first and only battle of the World War One to be fought in East Asia. It is usually at most a footnote in histories of a conflict which resulted in unprecedented slaughter, spelled the end of Empire (the Austro-Hungarians, Ottomans and Romanovs all succumbing) and ushered in Bolshevism and Communism (immediately) and Fascism (not long after). But, Fenby argues, seen from an Asian perspective,

The clash in Tsingtao forms part of a saga with a present-day resonance.

Tsingtao, being held by Germany, was an obvious military target. Japan accepted British overtures for a joint operation; the Japanese saw an opportunity for expansion.

For [Foreign Minister] Kato and his colleagues this was not so much an attack on Germany under the alliance with Britain as a means of enlarging their country's position in China.

From that point on, the British hardly had a look in; British troops were made subordinate to Japanese command. After the German capitulation, the British Embassy in Tokyo was informed that "it would 'be more convenient for practical matters'" if matters were left to the Japanese troops. Japan appointed a governor and that was that.

The Allied, i.e. Japanese, victory—never in doubt given Tsingtao's isolation—gave Japan leverage at the Versailles Peace Conference. At Versailles, as throughout the war, "Realpolitik reigned, at the expense of China."

Fenby connects the dots: much of what happened in the following three decades up to the Communist victory in 1949 can be attributed to ways the Japanese and Chinese were respectively treated at Versailles. Of course, China was not the only erstwhile ally on the wrong side of secret treaties (the Arabs have similar long-term grudges against the Sykes-Picot agreement) and the Japanese trajectory to attempted regional hegemony predated Tsingtao by at least a couple of decades.

The Siege of Tsingtao's brevity is admirable. Fenby quotes liberally and pithily from primary sources—upon hearing of the Japanese ultimatum to quit the city, for example, an anonymous German huffed in his diary that "They can tell this to a Russian but not to a German." He gives rousing and evocative descriptions of the battles themselves and an inside look at the various diplomatic machinations and misgivings. Cables from the Kaiser, monogrammed cigarettes from the Japanese Emperor, batlike German airplanes and the first recorded air-sea battle and are the sort of piquant and picturesque details in which this slim volume abounds. The Japanese's lack of respect for their erstwhile British allies was palpable and even explicit, something that should and did ring warning bells for the future.

Fenby also sets the event firmly in its historical context, fore and aft. The book is a useful refresher for period from the last decades on the nineteenth century through the mid-point of the twentieth. Japan, Germany and Russia all get their due.

Fenby's account of the Japanese attack on Tsingtao—and it was mostly Japanese, the British playing a minor supporting role—reads eerily like the Japanese invasion of Hong Kong in the next war: naval landings, bombing and bombardment of the urban areas, the progressive abandoning of defensive lines, the messages from the government back home encouraging the brave yet futile defense in the face of hopelessness of it all, the ultimate surrender. Tsingtao seems—albeit anachronistically—like a practice run.

That very minor point aside, not only is The Siege of Tsingtao the sort of consumable publication that might make books once again common on public transport, it should also serve secondary schools and universities, especially in Greater China, as an engaging essay illustrating how seemingly isolated events often aren't.

Peter Gordon is editor of The Asian Review of Books.