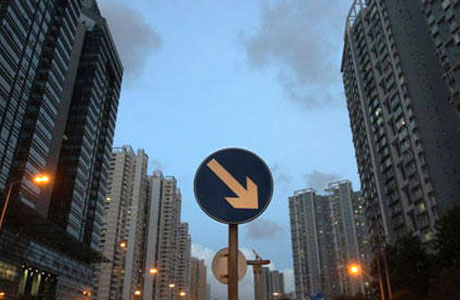 (Beijing) – For the first time in a few years the voices of those predicting a sharp fall in home prices are growing louder than those defending the sector as robust.

Chinese media outlets have been running stories about experts debating whether the housing market will collapse – a topic that many would have written off as alarmist just a few months ago.

Real estate tycoons Wang Shi, chairman of the country's largest-listed developer China Vanke, and Ren Zhiqiang, chairman of Huayuan Property, have been often quoted saying the property markets faces a real threat this year. This is alarming considering Ren has a reputation as an optimist.

"I've been at this for more than 10 years and this is the first time I have used the word risk," Ren said at a forum in January.

In February, several developers in Hangzhou, the capital of the eastern province of Zhejiang, put units on sale at deep discounts, triggering a protest by people who had bought homes before prices were slashed.

Meanwhile, Industrial Bank said it had told all branches to stop lending to developers through mezzanine financing, where a loan is routed through intermediaries such as a trust company and used to buy equity in the borrower under a repurchase agreement.

The two developments sparked a debate about whether the property market is in a precarious position.

Although people soon realized that the price cuts by the Hangzhou developers were not representative of markets elsewhere, they sent a worrying message that the foundation of a booming market may be shaking, Wang Ke,a partner at Top Agency Real Estate,said.

"To some extent, the property market is supported by confidence," he said. "The intense reactions to the price cuts make it seem that everyone is not as confident as purported."

Many observers also say that the episodes shed light on a deeper problem: in many cities developers have been building homes faster than they can sell them.

Data from real estate agency Centaline Property shows that Hangzhou had more than 110,000 unsold homes at the end of last year. The combined area of those homes was 14.6 million square meters, up 41 percent from a year earlier.

The data also shows that at the end of last year the combined area of houses ready for sale in Changzhou, 200 kilometers north of Hangzhou, was 11.7 million square meters. That was the highest in the city's history, and it would take nearly 20 months to sell the homes if no new ones were built.

Other cities are also feeling the inventory pressure. Data from the National Bureau of Statistics shows that 493 million square meters of commercial housing were on sale around the country at the end of last year, up almost 40 percent from a year earlier, when a similar year-on-year growth figure was posted. The growth of sales rates is much lower.

The situation was serious in eastern cities like Suzhou, Qingdao, Fuzhou and Nanchang, said Zhang Haiqing, Centaline's director of research.

In those four cities, it would take more than 12 months to sell the homes that have been built, she said. In Shenyang, in the northeast, the figure is nearer 20 months.

All of those cities have one thing in common, she said, namely that demand for housing is mostly local, with relatively few outside buyers. But strict house purchase requirements and tighter bank credit have made it difficult for local demand to keep pace with fast-rising supply.

Homebuyers in many cities have felt the pinch of higher borrowing costs. Twenty-seven of the 69 banks in 22 cities surveyed recently by data provider China Real Estate Information Corp. (CRIC) have raised their lending rates for first mortgages by 5 to 15 percent from the level at the end of 2013.

The higher lending rates would "largely weaken the inelastic demand for houses because they increased the cost of borrowing and dampened the demand for buying a house," CRIC said in a report.

"Tighter bank credit would give rise to the expectation for lower transaction volume and home prices, which would affect buyers' decision-making," the report said.

In fact, CRIC says the impact of higher interest rates on mortgage loans affects the market more than the government's restrictive purchase policies.

Many developers are also grappling with financing difficulties. The Hangzhou developers that put their units on sale at steep discounts probably did so because they needed to recoup capital quickly to repay costly trust products and investment funds, analysts say.

Banks are slow to loan to real estate projects, and many prefer only the big ones. Small developers were forced to use other financing channels. That often means banks' off-balance-sheet operations, which are not subject to regular loan restrictions.

A fund manager familiar with Industrial Bank said the lender tightened mezzanine financing to control its risk exposure to developers in small cities to whom it had been generous to in previous years.

Meanwhile, big developers, including China Vanke, Evergrande Real Estate Group and Longfor Properties, say they do not have any problems getting loans.

Many industry observers say they expect home prices in small cities to fall while those in the biggest ones remain high.

In the first two months on 2014, sales of plots of land in Beijing totaled more than 62.3 billion yuan, data from Centaline shows. That is roughly one-third of the city's land sales for the whole of last year and only slightly lower than the total amount of 64.8 billion yuan seen in 2012. Zhang Dawei, Centaline's analyst, predicts Beijing's land sales this year will exceed 200 billion yuan.

Centaline also says that 82.5 percent of the land bought by 10 large developers in the first two months was in the big four cities and in provincial capitals.

The spending spree indicates developers are confident that the housing market in at least the big cities will continue to flourish. The same, however, cannot be said for the small cites.