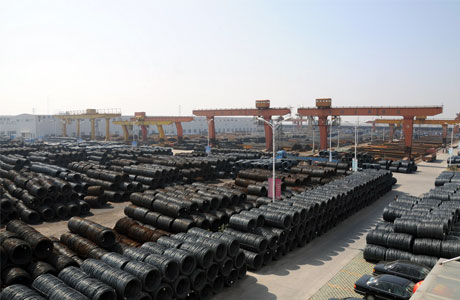 (Beijing) – The largest private steel manufacturer in the northern province of Shanxi has become ensnared in deep debt troubles as the whole industry struggles with overcapacity.

Highsee Iron and Steel Group Co. Ltd. has seen its capital chain broken and creditors including banks line up to try to get their money back, sources with knowledge of the situation said.

The exact amount of debt the company owes is not clear. Estimates by industry observers put it between 15 billion yuan and 20 billion yuan. China Minsheng Bank alone may have lent more than 3 billion yuan to Highsee, a source close to the bank said.

Minsheng Bank's president, Hong Qi, declined to say how much the company owes. He said the provincial government has intervened, but that the situation "was not even near a crisis."

However, analysts worry a storm is brewing. "Highsee's problems are typical" in a sector where a huge debt problem is only beginning to reveal itself, an industry observer said.

The China Iron and Steel Association, a trade organization, has also sounded the alarm. A recent report it published says many of country's major steel-producing and trading companies' debt-to-asset ratios have passed the 70 percent red line.

The report also shows that the combined loss of major steel companies in the first two months of the year was nearly 3 billion yuan. Products that had sold well in the past were piling up in warehouses, hurting the ability of companies to repay loans.

"The first quarter of this year may be the worst one since the industry entered the new century," with private producers in particular hurting, Liu Zhenjiang, vice chairman of the association, said on March 14.

Banks have tightened lending to steelmakers and trading companies, narrowing their clients to large and state-owned firms, several bankers said. A source close to the regulator said banks' outstanding loans to the steel sector were estimated to be roughly 1.5 trillion yuan at the end of last year. The large ones were especially heavily indebted, he said.

Highsee has shut five of its six furnaces, leaving one operating to keep up with deliveries to clients.

Sources close to the situation said it has been common for steelmakers including Highsee to sell on credit because there were too many companies churning out more products than could be sold. Hence, when clients fall behind on payments, a company can easily find itself in trouble as bank loans fall due.

"Highsee could have defaulted (on its contracts), but the oversupply is so bad that it worries a default at this time would scare all trading companies away," Jin Haidong, an analyst at Shanghai-based research firm CEBM Group, said.

Several steel-trading firms have sent representatives to Highsee's factories in Wenxi, a county in the southeastern part of Shanxi. "They are anxious to secure their deliveries amid fear that Highsee might one day collapse," a source close to the situation said.

Critics say Highsee's plight owes more to its owner's unwise investments than a bad market. The firm ventured into entertainment and equity investment since Li Zhaohui, son of the founder Li Haicang, took over the business in 2002 and became chairman.

Open materials show that the younger Li invested in financial institutions, including banks, securities firms and insurance companies. He was among Minsheng Bank's top 10 biggest shareholders before selling most of his holdings in 2007.

Highsee also says it spent 100 million yuan building a recreational center for children in Beijing in 2009. It says another one was built in the eastern city of Qingdao and a third is being prepared in Chengdu, in the southwest.

"If Li had not made such reckless investments, Highsee would not have wound up in such a terrible state," a source close to the firm said.

"Highsee's troubles are not only the result of the broader industrial environment, but also because of the owner's poor judgment," another source close to the firm said.

There are doubts that intervention by local authorities can save Highsee given they have other pressing problems.

"The government has been preoccupied with consolidating local coal miners," a source close to the provincial banking regulator said. "It hardly has the time for saving a steelmaker now."