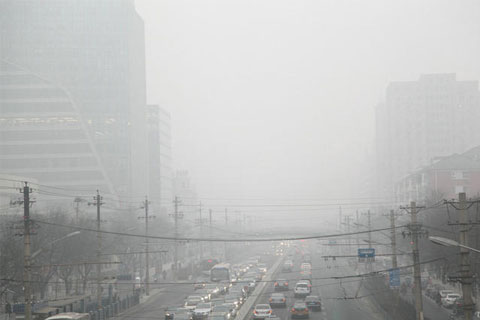 (Beijing) – On March 25, the World Health Organization increased its estimate for the number of premature deaths related to air pollution in China every year from the previous 3.2 million to 7 million. On the same day, the Ministry of Environmental Protection released an annual report on air quality that included data that was even more worrisome.

The document was the first national air quality report since China began monitoring PM 2.5 – inhalable matter less than 2.5 microns in diameter that can damage the lungs – in 74 major cities on January 1, 2013.

The results were hard to swallow. The average reading of PM 2.5 concentrations in the cities was 72 micrograms per cubic meter, almost twice as high as the country's standard of 35. The standards in many developed countries are much lower than 20. Only Lhasa in the western region of Tibet, Haikou on the island province of Hainan, and Zhoushan, a coastal city with few industrial plants in the eastern province of Zhejiang, met the standard.

The Chinese cities monitored are arguably the country's most important. They include Beijing, Shanghai, provincial capitals and the larger cities in each region. About 300 million people live in these cities. And judging by their contribution to the country's GDP, they form arguably the most productive segment of China's population.

The report puts an end to a debate over whether air quality in major cities has worsened in the past four or five years. Before China began tracking PM2.5, many officials and experts said air quality had in fact improved in recent years, citing data collected by the ministry.

For instance, the Beijing Environmental Protection Bureau said in an annual report published in June: "The concentrations of sulfur dioxide, nitrogen dioxide and PM10 declined by 1.5 percent, 5.5 percent and 4.4 percent, respectively, in 2012, compared with 2011."

But Wang Yuesi, an atmospheric physicist at the Chinese Academy of Engineering, and other experts suspected that once the cities begin to track data on PM 2.5, the happy talk about cleaner air would end. They were right. The ministry's latest report indicates the prevalence and severity of air pollution was underestimated.

Air pollution is grim in the country's two biggest cities, which are home to more than 42 million people. The capital saw 59 days with heavy or serious pollution last year, meaning the Air Quality Index (AQI) on those days exceeded 200 and 300, respectively, the report said. The average PM2.5 concentration was 89.5 micrograms per cubic meter. In Shanghai, the number was 23 days and 62 micrograms per cubic meter.

Despite getting global attention for its terrible air, Beijing does not even make list of 10 most polluted cities in 2013 in China. Seven of the 10 cities are in the northern province of Hebei. The other three cities — Xi'an, Zhengzhou and Jinan – are also in the north.

The report also sheds light on a lesser known fact. The high average PM 2.5 concentration means air pollution is present even on seemingly good days, the report said. For instance in Beijing, on many sunny days PM2.5 could reach as high as 70 micrograms per cubic meter, sometimes even exceed 100. Air pollution is only seen in the form of smog on days with light or no wind.

"Measuring by the concentration of PM2.5, air quality has indeed worsened," Wang said.

PM2.5 poses a greater risk to human health than PM10 because it is smaller and more likely to be absorbed deep into the lungs. Whereas PM10 is mostly dirt and dust that can be caught by common face masks, PM2.5 particles contain a wide range of hazardous chemicals that are much more difficult to block.

In the past, the particles in the air were relatively thick and heavy, so they settled more easily, he said. Now, they are finer and lighter and tend to stay afloat in the atmosphere longer, which "is why the public feels that pollution has been worse."

At the annual legislative meeting in March, Premier Li Keqiang said the government will make cleaning up the air a top priority. The government has pledged to reduce significantly and even eliminate heavily polluted days by 2017, but the ministry's report indicates the goal might be too ambitious.

The plan, unveiled on September 12, was to reduce the PM 2.5 concentration in the Beijing-Tianjin-Hebei, the Yangtze River Delta and the Pearl Delta regions by 25 percent, 20 percent and 15 percent, respectively.

Among all the cities in those regions, Beijing is under the most pressure. The plan said average concentration of PM2.5 will be lowered to 60 micrograms per cubic meter in three years. Using the latest data from the ministry, this means the capital would need to cut levels of the pollutant by 33 percent, rather than 25 percent.

The ministry realizes the problem, pointing out in the report that air qualities in Beijing and its surrounding regions is still "quite far from the goal."

It is impossible to reverse the damage done to air quality in a short time because urbanization and industrial development continue to put pressure on environmental protection, Wei Fusheng, a research fellow at the China National Environmental Monitoring Center under the Beijing environmental bureau said. He predicted that it would take at least two or three decades for the country's air quality to meet the standards of developed countries.

The ministry admitted that meeting the target for Beijing-Tianjin-Hebei and the Yangtze River Delta region is "very challenging" but said the situation in the Pearl River Delta is optimistic. Some 76.3 percent of days in the region's nine largest cities saw the air quality meet the national standard, which is 15.8 percentage points higher than the average of the 74 cities, the report said.

Many cities, including Guangzhou and Shenzhen, had no "serious pollution" days in 2013, the report said.

Environmental regulations have failed to keep up with the country's breakneck industrialization and urbanization in recent years, the ministry says. Previously, car emissions were believed to be a major cause of air pollution, but the ministry said that is only a small part of the problem.

The number one problem is the country's reliance on heavy industry.

"Reform of the economic structure has been slow," the ministry said. "Dirty industries with high energy consumption and pollution are still quite concentrated and developing rapidly, putting enormous pressure on air quality."

Another factor is weather. In 2013, most areas of the North China Plain and the Shandong Peninsula experienced less wind, which meant pollutants could not leave the area.