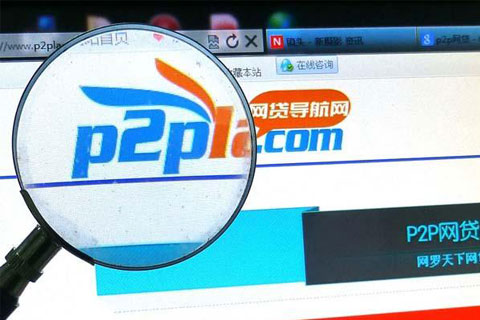 (Beijing) – A loan crisis reportedly involving the country's top peer-to-peer (P2P) lending company has fueled worries that the poorly regulated industry is has drifted away from its roots to engage in other activities.

The original idea for P2P websites was that they were a platform to match people with spare cash with those who need to borrow money. A typical transaction could see someone with a spare 5,000 yuan lend to a newly married couple for a honeymoon trip. Many websites also allow small companies to borrow through them.

The first P2P website in China appeared in 2007. P2P website aggregator Wangdaizhijia.com estimates there are about 1,000 such companies in operation today.

Unlike their Western counterparts, many Chinese P2P websites have ventured offline into what critics say should be a banks' business. Their cooperation with small-loan companies and guarantee firms helps those entities work around financing restrictions.

On April 8, the news service run by data provider Wind Information reported that CreditEase would not be able to get full payment of a loan worth 800 million yuan because the borrower, a real estate developer in the northeast, was sued by several debtors for failing to repay loans.

The report also says the properties used by the developer as collateral to borrow through CreditEase are unfinished buildings in small towns, and that the money gained from their sale would not cover the loan amount.

The report has been carried by major news outlets since it was published.

CreditEase said on April 9 that all of its financing for property developments in the northeast were healthy. The combined amount of the loans involved was much less than 800 million yuan, and none had defaulted, it said.

A manager at a P2P company said this is the first time CreditEase admitted raising funds for developers. Previously, large P2P companies including CreditEase said they would not handle loan requests from industries including real estate development, a sector the government wants to cool.

A source close to the situation said a CreditEase subsidiary formed private equity funds with a chosen few investors to finance projects, instead of pooling small-sum loans from ordinary P2P lenders.

Critics say this is one of the examples that CreditEase has changed from being a P2P intermediary to acting more like a bank. The firm also has brick-and-mortar stores where employees seek out potential borrowers from small and family-run businesses.

A typical loan agreement signed this way would see the borrower getting money from Tang Ning, CreditEase's founder and CEO, who then transfers the rights to repayment of the loan to the firm's P2P investors.

Many P2P companies in the country engage in similar offline operations brokering lending agreements in a way that often severs the direct connection between lenders and borrowers. Critics say this makes them no different than a bank.

Bai Chengyu, secretary of the China Association of Microfinance, said earlier the offline model lets firms take advantage of loopholes in regulations for the financial industry. He said a person who sets up a P2P lending firm, loans his own funds and then goes through the P2P lending platform to transfer creditor rights is in effect attracting deposits and making loans.

It is also common for China's P2P companies to cooperate with small-loan companies because they know who needs cash and who can extend a loan. Many also rely on guarantee companies to make lenders believe their investments are safer.

This bridge allows small-loan companies to make money off more loans than they could lend on their own, a manager of one lender of small loans said.

Rules set down by the banking regulator say a small-loan company can only lend using its own capital or money borrowed from banks, amounts that are capped at half their registered capital. This often means a small-loan company has to turn away borrowers because they do not have money.

Zhang Tuo, founder of P2P website Haodaibao.com, said companies like his find it easier to find borrowers and verify their credit worthiness if they cooperate with a small-loan company. Most of the work assessing the validity of requests for loans can be handed over to the small-loan company, he said.

P2P website Yooli.com, for example, has partnered up with seven small-loan companies. It receives recommendations on borrowers from the companies, assess them using an imported credit rating system, and puts information on qualified borrowers online for P2P lenders to choose from.

This is a mutually beneficial relation because "Yooli can focus on building a platform while they do what they are best at, which is to find clients, control risk and manage loans," said Ren Yong, Yooli's chairman.

Yooli's main source of revenue is commission fees equivalent to 1 to 2 percent of the loan amount that borrowers pay, Ren said.

Most P2P companies also promise to repay lenders their investment when a borrower defaults on a loan, either with money out of their own pocket or through cooperation with a guarantee firm.

Critics have argued that this is why a P2P website should be regulated as strictly as a financial institution rather than as the information providers they started out as. Without proper supervision, they say, P2P companies could use investor money to repay old loans, basically building Ponzi schemes.

Dianrong, a Chinese site modeled after the website in the Lending Club in the United States, started out asking investors to be responsible for their investments, something that set it apart from Chinese P2P companies.

Founder Soul Htite, an American businessman, said P2P lenders should be able to diversify their investment risk by lending to different borrowers. Also, he said, without having to set aside money to guarantee loans, a P2P website can allow investors to receive a higher rate of return than other websites.

But that hasn't worked in China. Having realized that it cannot compete with websites that guarantee loans, Dianrong had to also promise lenders that they can get all their money back in case a borrower defaults, said Guo Yuhang, the firm's co-founder.

But he said that in the future "we will phase out the guarantee system … because in three or five years the public should be able to accept it as a norm that no investment offers a guaranteed payoff."