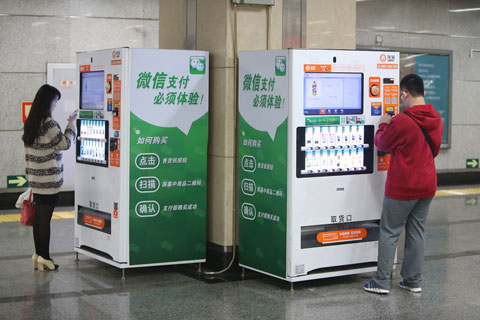 (Beijing) — O2O, or online-to-offline commerce, has become a buzzword in e-commerce. Companies like Tencent Holdings and Alibaba Group are racing to roll out apps that can link the Internet to traditional businesses and to partner with physical stores and service providers.

Tencent is using WeChat, its popular social networking app, to push deep into e-commerce territory dominated by Alibaba. Millions of the app's users have linked bank accounts to its payment function, partly due to a host of promotions. Besides allowing vendors to open storefronts on WeChat, Tencent also says the app can serve as an O2O tool for traditional businesses. Caixin spoke to a few businesses working with WeChat to see how the new commerce model works and what its limitations are.

What is O2O and who benefits from it?

O2O is the activity of finding and attracting Net users and bringing them offline. For businesses whose products or services cannot be packed up and shipped to consumers, such as hotels and hair saloons, O2O helps them take advantage of the Internet. Net firms also benefit from the commerce model because it allows them to tap into the profits that used to be exclusive to offline business and service providers through partnerships.

What does WeChat offer to businesses hoping to use it for O2O commerce?

WeChat offers two kinds of tools to these businesses: public accounts and mobile payment. The former is an account that sends articles to its subscribers. Traditional businesses can use WeChat to manage memberships, interact with frequent or potential customers, and send targeted promotions. The built-in payment feature then allows businesses to track transactions and analyze customers' shopping habits and preferences. Mobile payment is arguably the most innovative part of O2O because it gives consumers of traditional businesses the same convenience of online payment.

How is this different from what Alibaba offers?

Without a star app for consumer interaction, Alibaba wants to draw attention to its ability to analyze and collect consumer data. The e-commerce giant has accumulated huge amounts of data through its two shopping sites – Taobao and Tmall – over the years and plans to share some of the information with partnered businesses. WeChat will not provide analysis on data it collects, said Liu Hantao, an executive at WeChat. In addition, Alibaba also plans to make its collaboration model with traditional business such as retail groups a template for others who want to build a closer connection with the Internet.

Is WeChat a good traffic driver for traditional businesses?

Although the app and its 350 million users would seem to have great potential for offline businesses, many businesses say this is not necessarily the case. They said WeChat is good at bringing existing customers online, not the other way around. Cai Cansheng, who manages the membership program at 7 Days Inn, said the hotel chain uses its public account to stay in touch with customers after they check out. Courier service SF Express, retailer Shopin and Lenovo Group all use WeChat to connect with their customers instead of to attract new ones. In other words, WeChat is better at enhancing user loyalty and generating repeated purchases rather than luring in new customers. Part of this has to do with what public accounts offer: pre-order options, payment, discounts and customer reviews.

O2O relies on this technology, which involves using a smartphone or tablet to scan a code that carries some information because it is more convenient than other technologies. WeChat has tried to work around the restriction. Shopin's WeChat pilot store, which opened on April 25 in the eastern city of Hangzhou, allows customers to scan a code on actual products and they then appear in virtual shopping carts. The rest of the transaction – payment and delivery – is just like online shopping. But this could be hard for others to copy. Shopin has linked its physical and online inventories, something few retailers can do. It took years for Shopin to negotiate with manufacturers and franchisers. It is also unclear how successful the retailer's experiment has been.

What are some examples of businesses using WeChat for O2O?

The hotel chain 7-day Inn connects WeChat public account with its membership management system. In six months, it has attracted 1.35 million members. It receives more than 5,000 reservations from WeChat, and more than 70 percent of them are second-time customers. SF Express' WeChat account allows customers to fill out addresses for packages to be delivered and place orders. It plans to start WeChat payment in June. Lenovo uses the app to manage customers and send out notifications about products and promotions. It also allows customers to browse for goods at physical stores and pay later with WeChat.