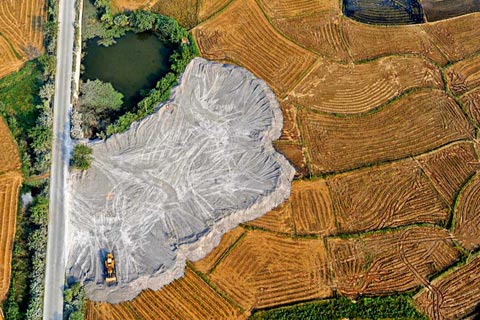 (Beijing) -- Pollution that is easily perceptible in China's rivers and urban air has gotten a lot of attention in recent years.

Now a less obvious environmental concern with equally serious repercussions – soil contamination – is getting the attention it deserves thanks to a first-of-its-kind nationwide study that documents a heavy toll on China's farms, forests and grasslands.

Eight years in the making, the Nationwide Soil Pollution Investigation Report released in April by the Ministry of Environmental Protection (MEP) and the Ministry of Land Resources (MLR) includes alarming statistics that underscore the damage done to cultivated and uncultivated land nationwide.

Some 16.1 percent of all soil samples collected in regions around the country were found to contain unacceptable levels of pollutants, the report said. The survey indicated that up to 19.4 percent of all cultivated land – an estimated 26 million of the133 million hectares of arable land nationwide, based on government figures – has been contaminated.

The pollution rate for cultivated land has thus nearly doubled the previous oft-cited official figure which said that about 10 percent of the nation's arable land, or some 12 million hectares, had been spoiled by unacceptable levels of pollutants.

The latest report also looked at woodlands and grasslands across the country previously unchecked by environmental scientists. It drew a grim conclusion: Some 10 percent of the soil sampled in woodlands nationwide and 10.4 percent of all grassland samples showed high levels of contaminants.

Overall, the report said, the land in southern China was found to be more polluted than areas in northern provinces. Heavy-metal pollution, often associated with mining, is most serious in the southwest and south-central regions. And the most pervasive of all the toxic heavy metals detected by investigators is cadmium, the report said in a first-ever acknowledgment by government agencies of cadmium's poisonous legacy.

The report underscored the enormous price that the land underfoot is paying for China's economic development by offering firm figures to replace soil contamination estimates that had been used by scientists and officials since the early 1990s.

One of the most serious threats posed by the soil contamination problem is that rice is being grown in cadmium-laced paddies, according to the report.

Since about 65 percent of China's population relies on rice as a dietary staple, the cadmium contamination issue is considered extremely serious. But officials have yet to map out a plan for addressing the problem.

One reason for a lack of action is that no one knows how much rice-growing farmland has been or is still at risk because of toxic quantities of cadmium. Neither is there a system for determining the full effects of soil pollution on any grain, rice or otherwise raised on farms across the country.

In 2007, a team of researchers led by Pan Genxing, a professor at the University of Nanjing's Institute of Resource, Ecosystem and Environment of Agriculture, collected rice samples from farms across the country. The team concluded that 10 percent of the 91 samples examined had poisonous levels of cadmium.

The MEP-MLR report also cited the danger posed by soil contamination in urban and industrial areas.

"Soil pollution in residential, commercial and industrial areas can harm human health" by exposing a person "through the mouth, respiratory system, or contact with the skin," according to the report. "Developing and building on polluted areas that have not been cleaned up can lead to long-term harm to exposed groups of people."

Plants, insects and animals are also threatened by soil pollution, the report said. The growth and reproductive abilities of plants, burrowing animals, earthworms and micro-organisms are affected. Toxins upset ecological processes and the soil's natural functions, such as the ability to provide nutrients to plants.

Even rivers far away or groundwater far below polluted land can be damaged by contaminants, the report said. "Pollutants in the soil can seep into and change surface water (and) groundwater," the report said, "polluting sources of drinking water."

Based on the sampling, the report said cadmium levels have risen substantially since the late 1950s. Levels of this toxin alone have risen by more than 50 percent in the southwestern and coastal regions, and between 10 and 40 percent in northern and western areas.

What can be done? Not much, the report's authors lamented.

"Once soil has been polluted, it's very difficult to restore it by cutting off pollution sources alone," the report said. "Overall, the costs for cleaning up polluted soil are high. It takes a long time. And it's very difficult."