The Birth Pains of a New Economy 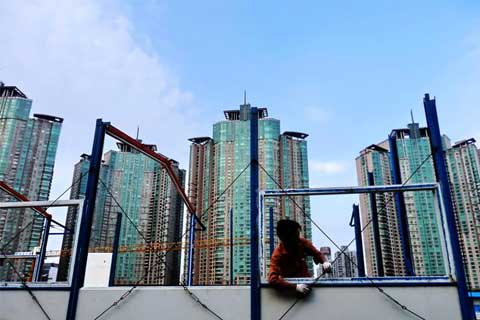 The quality of China's GDP growth is rising with falling property prices. The economy is diverting resources away from wasteful bubble activities to productive ones. While growth is slowing, it reflects shrinking of the bad GDP. Two-thirds of the economy is still expanding steadily. More importantly, China is experiencing a labor shortage due to a shrinking of working-age population and steady economic expansion. The economy is in a strong position to absorb the fallout of a deflating property bubble.

Attempts to bail out the property market are unlikely to succeed. China's property market is a bubble in both volume and price. Oversupply, especially in small cities, is destroying the expectation of price appreciation. Speculation cannot be revived. Household indebtedness is close to saturation. The high prices in large cities cannot be sustained by debt growth. Bailout attempts, such as eliminating purchase restrictions, will only backfire, as the restrictions do not suppress demand in the first place.

The property market could follow the example of the A-share market. Bailout attempts have less and less impact. The market eventually dies when people no longer pay attention to it.

Allowing prices to adjust is the best policy. The distortions in the economy due to the bubble shrink. The efficiency of the economy improves as a result. The improving efficiency leads to better labor income, which supports the virtuous cycle of rising wages and rising consumption.

The nationwide property bubble tipped over in 2012. There was a rebound in 2013. At the time, most analysts and market participants believed it was the continuation of the bull trend. And the new government had an incentive to continue the bubble and the means to do so. I wrote that neither was there.

A property bubble deflates over many years. The U.S. bubble peaked in 2006 and took five years to hit bottom. The 1997 Hong Kong bubble took six years to bottom out. Japan's is still deflating after two decades. China's is likely to follow the same pattern. I predicted the first leg down in 2012, the bounce in 2013 and another leg down in 2014. There may be another bounce ahead, but much less than 2013. There will be another leg down after that. The market may finally bottom in 2017 or 2018.

Each leg down attracts some pent-up demand. Those who want to buy and did not have enough money jump in when prices become affordable to them. When the needs of such people are digested, another leg down occurs to attract people with even less money. When a bubble deflates, the market must offer value to survive.

New York's Manhattan and London's central area have seen prices rising rapidly despite declining prices elsewhere because they have attracted very high-income people. If a city wants property prices rising while they fall everywhere else, they must have the ability to do what Manhattan and central London do.