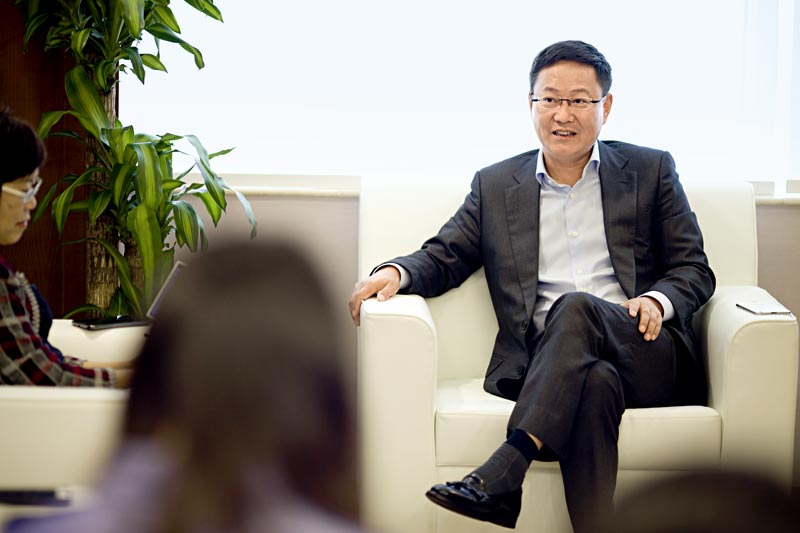 Since taking the helm at China Merchants Bank about a year ago, bank President Tian Huiyu has done a lot more than steer.

Tian has been navigating through a changing environment for China's banking industry and plotting a course for CMB's future. He's also lived up to his professional reputation in the banking sector as a focused leader who's not afraid to take the initiative.

All the while, Tian has worked quietly, following the same management style that marked his past success as the retail banking director at China Construction Bank.

In early May, though, Tian opened a window to his CMB strategy and stepped into the public eye by agreeing to an exclusive interview with Caixin.

Tian, 48, spoke frankly about his objectives and how he plans to take the bank – China's first, stockholder-invested commercial bank – through its so-called "second transition" period. He described his plan to play up the bank's advantages and address shortcomings by, for example, blending Internet banking and traditional finance.

Tian was picked to replace CMB's president for 15 years, veteran banker Ma Weihua, at a difficult time. Through the early 2000s, the bank held a competitive position and got high marks for a strong retail banking business. Then in 2009, its second transition period dawned with a focus on cost cuts, making the business more efficient, and controlling risks.

When China's economy started slowing down, however, the bank's business also gradually weakened. Meanwhile, rival banks chipped away at its retail banking niche.

After joining CMB, Tian responded to these challenges by promoting interbank and small business services. But new challenges cropped up as the bank's debt levels and risk exposure surged.

A graduate of Shanghai University of Finance and Economics, Tian began his banking career at the grassroots level by working in local branch offices of Construction Bank. In 1994, according to public records, Tian served as a secretary to Wang Qishan, who was then Construction Bank's chief. Wang currently serves as a member of the Communist Party's Politburo Standing Committee.

Here's how Tian responded to questions posed by Caixin:

Caixin: CMB started talking about a "second transition" in 2010. How would you describe the progress of this transition?

Tian Huiyu: The second transition is unlike the first transition, which had concrete, clear objectives aimed at transitioning toward the retail business, intermediary business, and the small- and medium-sized enterprise business. The demands of the (second transition) are higher. They include increasing the efficiency of capital, loan risk pricing, and fees; raising the proportion of high-value customers; and improving risk control. Its essence lies in pursuing sustainable growth.

There are two criteria for testing whether the second transition is a success or failure. The first is thorough marketization, and the second is by following it through a complete economic cycle.

It's now very difficult to reach any conclusions about the transition's results.

Now, people outside (CMB) suspect that the second transition is achieving only average results. Some have even compared growth for CMB's profits over the past few years with the rest of the industry, and they've concluded that the second transition failed. These people are not familiar with the inherent reasons for the transition; they only compare growth rates, and that comparison naturally leads them to inaccurate conclusions.

The second transition is, to a certain degree, a transition without a finish line. I think this is the ultimate objective that CMB has set for itself, as well as an objective for all commercial banks. In the Chinese economy, which has potential for fluctuations, interest rate marketization is imminent and online financing is emerging. Thus, banks have no choice but to completely overhaul themselves, particularly as regulatory demands on capital continue to rise.

Since taking over as CMB president and party secretary, what has been your view of the bank's strategic transition?

There are two, strategic issues we're paying attention to in the second transition. The first is not to mistakenly adopt strategic slogans simply for the sake of our strategy. Nor should we take strategic objectives as if these were the strategy itself. It should be "one part strategy, nine parts execution."

In almost every situation, if one doesn't exceed personal limits and give 120 percent, then one cannot reach his objectives. This is not a question of strategy, but rather that success requires persistence.

The world is filled with temptations, and it's easy to be seduced. In this regard, CMB has always done well. Our retail business' advantage is a result of efforts over the long term.

In mid-2013, CMB again emphasized itself as a service-oriented bank. So promoting the second transition was contingent on two considerations. First, there is the consideration that service is fundamental to CMB's banking business. In the future, as we build more advantages, those advantages will continue to be based on this fundamental.

Second, good service is the most elementary aspect of a commercial bank's business. "Service" may sound easy, but it's not if it encompasses more than merely a service-oriented attitude. Service relies more heavily on ability and efficiency. And behind a service, we need a specialized risk control process, the ability to quickly respond to a client's needs and other kinds of support.

Since you took over, many feel you changed CMB. It used to be known for caution and foot-dragging, for example, in areas such as how to properly boost interbank and corporate business. Does this mean you are more progressive, and that you can accept more risk?

"Firm and steady" has always been a core management concept at CMB, but this is a relative concept. I feel our professional abilities, including the development of our risk management and control abilities, are appropriate. On the contrary, any expansion that exceeds the scope of one's abilities, even slowly, is dangerous.

"Interbank finance" has become a derogatory expression of late. All bank business comes with leverage. The extent of this leverage is not the only factor that determines risk. The key lies in the nature of credit asset risks within leverage operations.

Of course, when utilizing leverage, one must amply consider liquidity risks. In truth, there is an objective demand for interbank financing. Most interbank financing capital eventually flows into the real economy. (Leverage) is not at all as negative as some outside (the banking industry) describe it.

China now has three ways to determine interest rates. One is the central bank price. Another is being applied in Wenzhou, Zhejiang Province, for a pilot, private financing program. And another is the interbank rate.

Interbank financing is now developing rapidly. In reality, it represents an experiment — on the eve of interest rate marketization — by banks fostering new profit growth points and seeking new commercial models. It's also a financial system reform that's beneficial to promoting marketization at the micro-economic level.

CMB's interbank business risks are controllable. To manage an interbank business, one must follow the same, risk exposure-based rules for loan management. That includes integrated credit management, with strict controls on scale limitations. Currently, the proportion of CMB capital in interbank financing is very small compared to total bank capital.

Did CMB personnel adjustments begin after you took over? You have expressed interest in creating a "lightweight" bank during the second transition. What are the corresponding institutional designs?

Institutional personnel adjustments have yet to begin. They are still being studied. However, the core principle will be marketization.

To build a lighter bank, the entire organization will have to be flattened and capital consumption lowered. Clients will have to be obtained in large batches. We are not looking for large and comprehensive changes, but rather small refinements. There is no need to establish enormous bodies at every level. Our response time to clients must be faster, and our risk controls more effective.

In the past, banks were especially keen to risk management. To do this, they had to establish new departments and hire new employees. That was a mistake. Usually, the more people one has, the weaker one's risk management becomes. Collective responsibility ends up as collective irresponsibility.

On the surface, it may seem that the several dozen signatures on an approval document prove there is risk control. But in reality, the people who sign their names don't have to use their brains. In their eyes, there's always someone at a higher level who will also sign. Risk control institutions should be set up with an eye on efficiency. Methods that add a new checkpoint at every link should be abandoned in favor of those that put emphasis on actual risk control.

Online financing was an inevitable development, as return on equity in the financial industry is relatively high. Long-term, the Internet will inevitably exert an ever-greater influence on traditional finance. We in this generation must serously contemplate this issue.

From a banking perspective, we have to recognize a few things. The first is traffic flow. Our bank has worked hard for years and opened a lot of local branch offices. What we have to show for it are client numbers in the tens of millions. An online finance platform can achieve that same feat in just a few months.

Currently, the online finance business is making inroads through online payments. It's gradually moving toward financial management and loans. But their commercial models remain untested.

Our thinking is focused on how we can integrate our professional abilities with traffic flow. This can be resolved by setting up a service platform. We can focus on building a multi-level platform that's based on strong demand and the rigid demands of clients in segmented areas. We will focus not only on creating our own business platform, but we will actively integrate vertically and horizontally; develop inter-industry and cross-industry cooperation; gradually build a hub platform that can handle transaction flows; and seek target clients, batches of clients, precision marketing, and embedded services with large-scale data flow.

At present, a bank's primary sources of information include a client's "three sheets" (balance, income and cash flow). These represent financial and transaction data. Online companies, on the other hand, have client behavior data that lets them differentiate service procedures and risk management. Once interest rates are marketized, popular online investment products such as Alibaba's Yu'E Bao will no longer be significant.

I think that a financial service that's a true killer will have to be directed toward small business, credit cards and true wealth management. CMB is thinking about with whom it should cooperate. We want to link our professional capabilities with someone suitable. We won't engage in e-commerce, so they would have to resolve data issues and we would resolve industry applications.

After we start down the online business path, we will have to find the right partners and work to perfect our specialization in order to stay on course. We want to carve out a space and hold on to it, otherwise there will be no cooperation. We've got to use what we already have in our hand. That's our strategy.