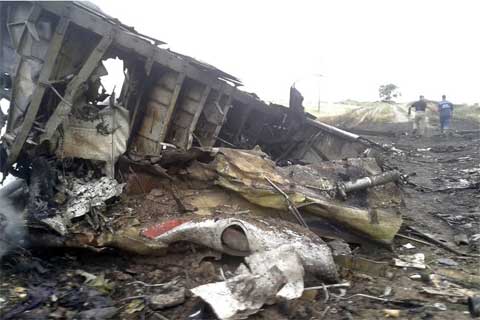 (Beijing) -- No one could have anticipated that a Malaysian Airlines air disaster would have an effect on the situation in Ukraine, let alone that this would happen twice in one year.

The March 8 loss of Flight MH370 affected the Ukrainian crisis indirectly: by taking the world's eyes off of the deteriorating situation in eastern Ukraine in the weeks following former president Viktor Yanukovych's fall from power on February 24, it allowed Russia's March 18 annexation of Crimea to take place with less international scrutiny.

But as the July 17 crash of Flight MH17 in Donetsk Oblast focuses attention back on eastern Ukraine, the tragedy will add broader international participation and additional uncertainty to the region's civil conflict.

World leaders were quick to respond. Russian President Vladimir Putin said in a statement that "the state over whose territory this happened is responsible for this terrible tragedy." U.S. President Barack Obama was more cautious, asking the separatists who control the area where the plane crashed to avoid tampering with evidence and saying that the U.S. would "offer any assistance we can to help determine what happened."

But other U.S. politicians pulled no punches. Republican Senator John McCain, a leading advocate of harsher sanctions against Russia, said that if the crash is the result of "separatist or Russian actions, mistakenly believing this was a Ukrainian warplane [and shooting it down], I think there's going to be hell to pay."

Former Secretary of State Hillary Clinton called on Europe to join American sanctions against Russian leaders, telling European leaders to "put [Vladimir] Putin on notice that he has gone too far, and we are not going to stand idly by."

Chinese Foreign Ministry spokesman Qin Gang expressed his "shock" at the crash and his condolences to its victims, adding that the Foreign Ministry had "activated the emergency response mechanism to establish whether there were Chinese citizens onboard."

The Immigration Department of the Hong Kong Special Administrative Region said on July 18 that one resident of the city was aboard MH17. According to the latest statement from Malaysia Airlines, 20 passengers have yet to have their nationalities confirmed. Approximately half of those on board held Dutch passports.

The tragedy is also another blow to Malaysia Airlines itself, as the carrier was already in dire financial straits even before the March disappearance of Flight 370.

Shares in the company's stock, traded on Kuala Lumpur's Bursa Malays, opened on July 18 at 0.19 ringgit (US$ 0.06), a fall of 13.6 percent from the previous day's close. The intraday decline expanded to 18 percent, but has narrowed as of press time to 11.1 percent.

In the weeks after the company lost contact with Flight 370, shares dropped as low as 0.155 ringgit (less than US$ 0.05). And before MH370 went missing over the Indian Ocean, Malaysia Airlines had already been struggling in the face of competition from low-cost rivals such as AirAsia, reporting a net loss of 1.17 billion ringgit (US$ 356 million) in 2013.

After the March tragedy, worried travelers began to cancel flights on Malaysia Airlines. Despite holding insurance coverage, the company still faces uncertainty over the amount of compensation it owes the families of MH370 victims.

In May, Malaysian Prime Minister Najib Razak said that his government had begun to consider bankruptcy proceedings for the airline. Then in June, Reuters reported that the Malaysian sovereign wealth fund, Khazanah Nasional – which holds a majority stake in the carrier – said it intends to take Malaysia Airlines private, a move which could lead to spin-offs of parts of the business and the introduction of a new management team.