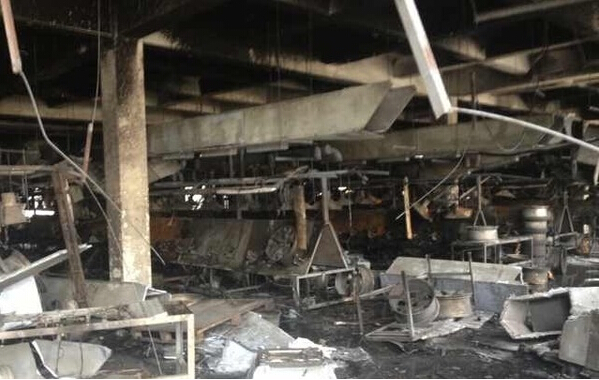 (Kunshan) – Workers at an auto-parts maker in the eastern province of Jiangsu which was hit by a deadly explosion two days ago said the factory was filled with pulverized metal every day and they could barely see others from one meter apart.

The August 2 explosion is suspected of being triggered by metallic dust, which is highly combustible when concentrated.

At least 75 people were killed in the early morning explosions, and another 185 people were injured as of August 4.

Experts suggested the explosion was caused by the dust of aluminum alloy, which the factory uses to coat car wheels to make them shiny and resistant to wear. Pulverized aluminum is released when workers use sandpaper to polish the coating. Without proper ventilation, the dust builds up in the air and becomes easily combustible.

Authorities have detained two executives of the firm for questioning, the state-run Xinhua News Agency reported.

Zhongrong was equipped with machines capable of removing 95 percent of metallic dust in the factory, the city's Environmental Protection Bureau said in a 2007 report.

But workers who escaped the blast said the production lines were always enveloped in metallic dust so thick that visibility was severely impaired.

Their protective gear consisted of goggles and a cotton face mask, which could not prevent exposure to dust particles, they said.

The factory uses vacuum machines to suck out fine particles floating in the air every day. Larger particles settled on the ground and formed a thick layer of dust which was only cleaned once a month, according to several workers.

"Many young workers were unable to withstand such harsh working conditions," and often left within several days on the job, one of the factory's current workers said. The workers at the factory are mostly between the age of 35 and 45, he said.

This is true for most car wheel polishers in the country, a source in Kunshan familiar with the operation said.

The wheel hubs of a good car are often curvier and require manual polishing because automated robots cannot yet handle the job with precision, he said. As demand for cars increased, the wheel polishing industry expanded its use of manual labor.

"This is a job with a low entry threshold and the salaries can run up to seven or eight thousand yuan a month," he said. Many other labor-intensive jobs in the country only pay half that price.

"But young workers are reluctant to take it because of the intense labor required and heavy exposure to toxins," he said. Those who stay, he added, "are often those that badly need money to raise a family."

The Zhongrong workers also said they routinely worked excessively long hours. The factory had a 12-hour workday which began at 7 a.m., but workers were frequently called in for morning meetings before the start of the day and would work as late as 11 p.m.

Zhongrong has more than 500 employees and about 200 of them work in the part of the factory that exploded.

More than 300 people were caught in the explosion, however, because it occurred during a work shift, the workers said.

New workers were recruited and started working the next day without any training in safety protocols and emergency evacuation plans, they said. Smoking is banned near production lines but not in restrooms right outside the workshops.

An industry expert specializing in aluminum processing said he suspects that a smaller explosion happened and stirred up the heavier aluminum particles, setting the stage for a second and fatal explosion.

A worker at a factory near Zhongrong said a leak in the workshops' natural gas pipelines could have been the initial trigger of the accident. The government has not ruled out or confirmed this possibility.