The Jiangxi Township Doing a Brisk Trade in Cambodian Wives 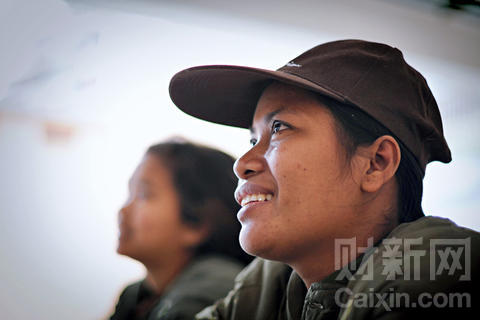 (Beijing) – It is a hot and sticky midsummer day in a small village along the Chang River in the eastern province of Jiangxi. The most popular spot is in front of the local grocery where a few women are playing mahjong as children chase each other around.

Sitting separately are two young women, whispering. With darker complexions, deeper eye sockets and thicker lips, they look different from the locals. One of them wears a pair of high-heeled shoes, a short T-shirt and tight jeans, out of place with the more traditional local environment. The other woman is pregnant and is playing with her big-screen smartphone.

"They are our Cambodian brides," says one local woman. "Every village along the Chang River area has at least three or four of them."

About seven or eight years ago the first Cambodian bride appeared in Huanggang, a rural township with two dozen or so villages scattered along each side of the river. A villager went to work in Yunnan – a province bordering Vietnam, Laos and Myanmar – and a client introduced him to a woman from his family. She was happy with her new life in China, and spread the word to other women that they should come to Jiangxi.

Eventually, this riverside township, which used to be famous only for annual floods, has turned into China's most well-known "collection and distribution center" for Cambodian wives.

Huanggang has more than a dozen brokers specialized in bringing together Cambodian women and Chinese men. In the past three years, thanks to new Cambodian regulations that make it easier to marry foreigners, Jiangxi's official marriage registration department has handled more than 2,000 cases involving women from the Southeast Asian country. Large numbers of Cambodian women are also flocking into the neighboring provinces of Fujian and Zhejiang.

But not all find a better life. Some women are tricked into getting married, thinking they are coming to China to work, and the Cambodian consulate in Shanghai has been kept busy dealing with unhappy women who want to return home. This has raised concerns about human trafficking, and prompted calls for the governments of both countries to better handle the phenomenon.

"I was willing to marry this far away from home," said Xiaoyan, a Cambodian woman who already has a strong local Jiangxi accent and a one-year-old son.

She got married to a man from Huanggang two years ago, and not long after their wedding her husband had to go to Zhejiang for work so he could repay the debt to the matchmaker and furnish their new three-storey house. Xiaoyan, 30, sees him only once a year.

As one of the world's most underdeveloped nations, about one-fifth of Cambodia's population lives in poverty, recent figures show. That means some 8 million people live on less than US$ 2.30 a day.

Xiaoyan said that in her home village the poorer you are, the earlier a woman gets married. She did not get married until she was 28, and chose a Chinese man because "the Cambodian men are too poor."

Today, China is overtaking South Korea to become Cambodian women's main destination for marrying a foreign man. Xiaoyan said she had no idea what China was like except that "it's a lot richer and bigger." Whereas marital violence is commonplace in Cambodia, she heard that "Chinese men don't beat their wives."

Through a referral from a coworker at her factory, she was introduced to a Chinese man with a promise of a dowry for her family of US$ 400. "So my mom happily sold me!" she said, half-jokingly.