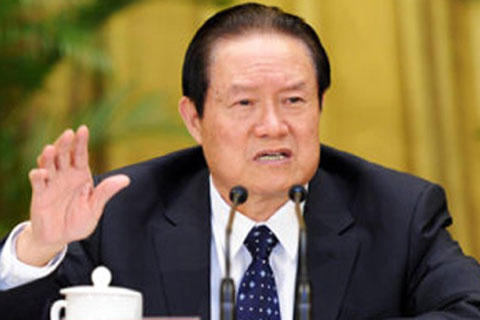 (Beijing) – While Zhou Yongkang and his relatives were rising to power in the 1990s, the family's ancestral burial ground became a common place for solemn visits by a variety of government officials.

The tombs are a few hundred meters north of the village of Xiqiantou, near the banks of the Lujiawan River, in Jiangsu Province. The oldest tombs, following local tradition, are earthen. Many have crumbled over time, becoming nearly indiscernible beneath the plot's mulberry trees.

Locals say Zhou Yongkang, a former member of the Politburo Standing Committee and now the focus of a Communist Party graft investigation, once paid an old monk to study the burial ground for a feng shui appraisal. The monk found problems and warned they would hinder Zhou's political ascent. Zhou followed up by phoning his brothers, exhorting them to make repairs recommended by the monk. The complex got a makeover and a beautiful stone wall.

The stream of visitors seeking to pay respects – and hoping for favors or a career boost – strengthened as Zhou's political career rose. Long lines formed every Tomb Sweeping Day, an annual holiday for remembering ancestors. So many people visited that the local government opened a parking lot outside the village in 2009.

Most visitors were party and government officials. They came from not only nearby Wuxi, but from other Jiangsu cities and Shanghai as well. Some cadres were members of the People's Armed Police. Before leaving, most would ask a Zhou family member to "give a word to senior officer Zhou" on their behalf.

The investigators' findings were never made clear. But afterward police installed security cameras around the tombs as well as on nearby roads at two intersections. Moreover, the Zhou family erected tombstones over four of the earthen plots.

To make the site more accessible, villagers said, a road was extended in 2009 to reach Zhou Yongkang's childhood home in the village of Houqiao. The extension, which paralleled an existing road just 100 meters away, involved filling in a lake, paving over farm fields and demolishing homes.

The local government stirred anger by paying those whose homes were destroyed only 350 yuan per square meter for their properties. At the time, other housing nearby was selling for 3,800 yuan per square meter. After state television reporters from CCTV investigated and aired a report about the real estate debate, the project came to a temporary halt.

"We asked you to do such a little thing and you couldn't do it," they remembered her saying. "Do I need to call Little Yang?" Little Yang is a local government official in charge of the area.

Sources say a former Zhou Yongkang classmate was a victim of a forced demolition. He found his home flattened after returning from a trip with his family. Nearby, an elderly couple was a holdout until one night when hooligans banged on their door, set off fireworks and screamed until they gave up.

The road was finished in June 2010 and named Yongkang Boulevard. The Zhou family home was renovated, and the village cleaned up.

Villagers say Zhou Yongkang seldom visited the area in recent years. His last appearance in Houqiao was for 45 minutes on April 17, 2013. One local said the visit was accompanied by "an unbelievable number of police officers on the road, as well as three lookout teams."

Twelve days after that visit, Zhou visited his alma mater, Suzhou High School. The school website says Zhou toured the campus and told stories about his school days. He was called a "distinguished graduate."

After investigators opened their probe of Zhou, the school removed an epigraph that he wrote urging students to study and follow universal principles. It had been proudly affixed to a classroom building wall.

All in the Family

In addition to having a strong political influence and a lot of supporters, members of the Zhou family have been extremely successful business owners, investors and professionals. It appears Zhou's posts with the government and state-run China National Petroleum Corp. (CNPC) played a role – perhaps a key role – in many or all of these success stories.

Much attention in recent weeks in the Chinese media has been paid to Zhou Bin, the oldest son of Zhou Yongkang, who profited from businesses run by relatives and aids. Less well-known is a younger son, 39-year-old Zhou Han, who earned a master's degree at China University of Petroleum and headed CNPC's oil and gas distribution center in Beijing.

Sources said Zhou Han has been detached from Zhou Yongkang and the rest of the family since his mother Wang Shuhua died in a car accident in 2000. He's spent his years focusing on research and work.

Zhou Yongkang and Zhou Bin each kept an eye on Zhou Han while building their political and business empires. People inside Zhou Bin's circle of contacts included Zhou Han's supervisor, Zhang Wei, and his wife.

After divorcing his first wife, Zhou Yongkang married CCTV reporter Jia Xiaoye in 2001. Soon after, her older sister Jia Xiaoxia joined CNPC and went to work for the company's divisions in Ecuador and Canada.

Jia Xiaoxia was spokeswoman for CNPC's Ecuador unit NPC Amazonas in 2003, the year the company signed production-sharing contracts for the Oriente Block 11 project. Reportedly, she also worked on CNPC's oil projects in Venezuela and Sudan.

Jia Xiaoxia moved to Calgary and lives there today. She has served on the board of the Canada-China Chamber of Commerce as Margaret Jia, general manager of CNPC International (Canada) Ltd.

CNPC sources said the position may have been created for the purpose of giving Jia Xiaoxia a good title, since all CNPC operations in Canada had been handled by Li Zhiming, head of PetroChina International Investment (Canada).

Zhou Yongkang's younger brother Zhou Yuanxing has never left the village, but he did get rich. "When his brother was at CNPC, Zhou Yuanxing's family had money," said one villager. "They got more after big brother went to Sichuan."

Zhou Yuanxing also worked as a mediator, according to villagers, by arranging jobs for seekers and mediating for businessmen. He then started charging to intervene for people in trouble with the law, vouching for them in court and helping some avoid jail.

Villagers said Zhou Yuanxing's son, Zhou Xiaohua, once slapped a police officer on the face for pulling him over during a traffic check. The officer later apologized and paid Zhou Xiaohua for the clothing that was torn during the incident.

Zhou Lingying and her relatives allegedly profited from ties to Zhou. In 1992, she was appointed manager of Wuxi County Commercial Goods Co., a state-owned enterprise under the county government. Five months later, while Zhou Yongkang was serving as CNPC deputy manager, the company expanded into petroleum and petroleum product sales.

Government records show her company owned many gas stations around Wuxi, and clients included Shengli Petroleum Administration, a Sinopec subsidiary, where Zhou Yongkang held the posts of party secretary and director general from 1989 to 1990.

Zhou Yuanqing and Zhou Lingying have a son, Zhou Feng, who studied in Japan and returned at age 30 with a master's degree in economics from Chuo University in Tokyo.

Zhou Feng and his mother build a web of firms that, among other things, provided geological and mineral exploration services. Through an umbrella company they own called Beijing Honghan, they have invested more than 400 million yuan in more than 20 companies.

Their next firm, Beijing Ruifeng Exploration Co., opened in 2006 to provide mineral and geological surveying, exploration and mining consulting. They founded Beijing Honghan Investment Co. in 2007 as the main vehicle for all investments, with Zhou Feng serving as chairman. The firm, headquartered in Beijing's New China Beijing Poly Plaza, focused on energy investing, technology development and consulting businesses.

In Sichuan, Zhou Feng and his mother got involved in real estate, including the redevelopment of urban centers. Zhou Feng followed the business formula that worked for his older cousin Zhou Bin by buying property on the cheap and selling it at high prices as quickly as possible.

In Wuxi, the Zhou family was engaged in lucrative sales of Audi 4S sedans – a favorite car among business and government officials – as well as selling liquefied natural gas (LNG) through a partnership with CNPC.

In February 2010, Zhou Lingying founded Jiangyin Benyue Automobile Co. Ltd. in Jiangyin, near her hometown Wuxi. She invested 19 million yuan for a 95 percent stake in the company, one of just five in China authorized to sell Audis and other cars made by FAW-Volkswagen Automobile Co. Ltd., a joint venture of state-owned FAW Group and Germany's Volkswagen Group.

Zhou Lingying had been an experienced Audi seller since 2004, when she partnered with the Changzhou Foreign Affairs, Tourism and Automobile Group Co., and private investor Gu Rongzan to launch Changzhou Kaige Automobile Sales Co.

Two weeks after Changzhou Kaige was formed, the company won authorization to sell cars from the Jiangsu Provincial Industry and Commerce Bureau. That same year, Changzhou Kaige was recapitalized with a 10 million yuan injection, and the Changzhou Foreign Affairs group sold out, giving Zhou Lingying a 60 percent share.

In February 2005, FAW-VW added her company to its list of authorized Audi retailers.

Zhou Lingying also sold out in September 2011. Under her command, Changzhou Kaige's sales had grown from 299 million yuan in 2006 to 1.15 billion yuan five years later. But like Jiangyin Benyue, the company's profits and tax payments were relatively low. Government commerce bureau data says the company earned 29.4 million yuan over the six-year span and paid only 16.4 million yuan in taxes.

Some say the financial records suggest fraud. "Everybody in the car sales industry knows Audi retailers make the highest percentage profits," said a Beijing car dealer. "Before 2010, most of them could begin earning in their first year. Even as competition has been heating up over the past two years, it's still certain that they can profit within two years or so of opening."

"It's not enough to just have money. You need to have enough gravitas and contacts" to open an Audi outlet, he said. "Some say not even high-level VW China and Audi China managers can get a finger in the pie."

On March 18, 2013, Zhou Lingying sold some of her Jiangyin Benyue shares, cutting her stake to 35 percent from 60 percent. Today, she remains the largest shareholder.

On August 27, 2013, authorities detained Li Hualin, the chairman of Kunlun and deputy general manager of CNPC, on corruption charges.