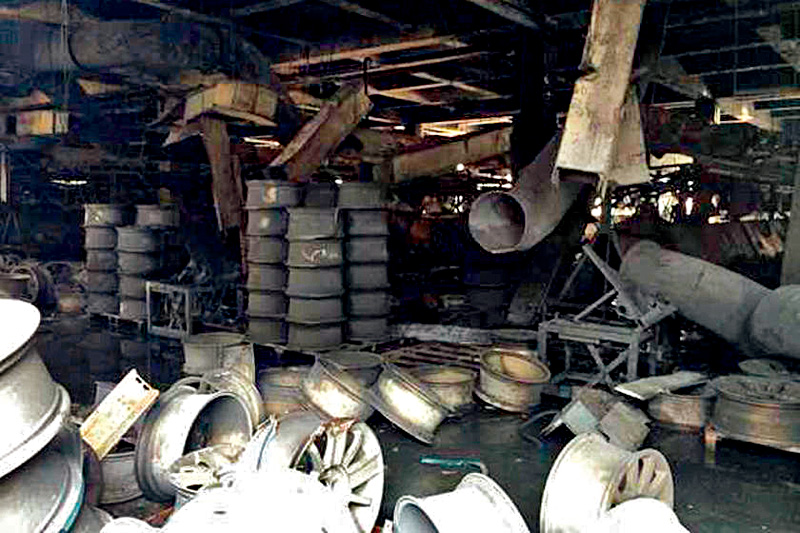 (Beijing) -- An early August explosion in one of China's manufacturing hubs has rung another alarm about the country's work safety issues.

The accident occurred on August 2 at 7:37 a.m., just over half an hour into the morning shift at Zhongrong Metal Products Co. in Kunshan, in the eastern province of Jiangsu. Accumulated metal dust in a polishing workshop ignited, causing a large explosion. Forty-four people were killed on the spot, while another 31 died later in hospitals. Some 185 we injured.

Two days later, a special team of investigators sent by the State Council said Zhongrong Metal had neglected many safety regulations. Production lines were too close together, ventilation equipment was lacking and the workshop had not been kept clean in accordance with regulations.

These hazards led to a critically high level of metal dust in the workshop. The metal dust oxidized – meaning it combined chemically with oxygen – and was ignited by a source of fire.

Zhongrong Metal, a car parts company specializing in finishing hubcaps, is one of over 4,200 Taiwanese companies in Kunshan. Taiwanese investors are attracted by the cheap labor and preferential local government policies.

After the explosion, CiTiC Dicastal Wheel Manufacturing Co. Ltd., the world's biggest aluminum alloy wheel hub producer and a supplier for General Motors Co., said Zhongrong Metal is one of its many contractors. In 2009, the European Union launched an anti-dumping investigation into Chinese-made aluminum alloy car wheels. CiTiC Dicastal, based in Qinhuangdao, in the northern province of Hebei, was the main target.

At an August 4 press conference, Yang Dongliang, chairman of the cabinet's investigative team and head of the State Administration of Work Safety, said that the main responsibility for the explosion lies with Zhongrong Metal's management. Local authorities should also be held responsible for regulatory failures.

The country's top prosecutor's office said on August 20 that three were detained over the accident, including the chairman, general manager and safety director at Zhongrong Metal.

August 2 this year was the annual Qixi Festival, a traditional lunar holiday that is China's Valentine's Day. Lei Shenglong, a worker in Zhongrong Metal's electroplating workshop, was looking forward to going out for dinner with his girlfriend, Xiao Yuan, who worked in the hubcap polishing workshop. Just after he started work, he heard a huge blast that made his ears ring.

Lei suddenly felt as if he was in a war zone. The polishing workshop was reduced to rubble and panicked workers came running out. Their hair and clothes were burning. Some had lost limbs. People had burns over their entire bodies.

Workers who had not been wounded divided into two groups: one trying to help the wounded and the others trying to put out fires. Lei joint the latter. But the equipment in the workshop was useless. No foam came out of fire extinguishers, and low pressure meant water from a fire hose only went 1 meter.

The fires would have to wait to be put out by firemen, so Lei started loading badly wounded people onto a truck. He saved more than 20 people, all with severe burns and some with missing limbs. He remembers a girl whimpering: "Save me. I'm only 20 years old. I don't want to die.' Another woman grabbed his arm and told him to save her husband.

Bottom of the Supply Chain

"Tier 1" suppliers like Dicastal have to guarantee the safety and environmental soundness of production by "tier 2" suppliers, but in reality, the suppliers have little control over their contractors.

"They just have a sort of 'red card' system that penalizes incidents," Li said. "There is no mechanism to further control on production."

"CiTiC Dicastal's own factories are clean and well-organized, but their external suppliers are small businesses with awful working conditions," a middleman who used to do business with CiTiC Dicastal said.

"Luxury hubcaps are made in small amounts," said a manager at a Taiwanese car parts firm in Kunshan. "Big companies cannot profitably handle these small orders, so they outsource them to small companies like Zhongrong Metals."

Although making these hubcaps requires high amounts of labor and skill, companies like Zhongrong Metal sit at the very bottom of the supply chain, where profit margins are extremely tight, the manager said.

A Matter of Luck

Kunshan has the highest concentration of Taiwanese investment on the mainland. Taiwanese businessman Zeng Ren says that the businesses have been attracted by Kunshan's location and preferential policies.

However, since 2008 business has gotten more difficult.

"Because profit margins for our big customers have gone down, they have started to squeeze production costs and have lowered their standards for suppliers," Taiwanese investor Chen Wentong said. "Less-regulated small and medium-sized suppliers have started to take orders, often with targets exceeding their own production capacity."

Zhongrong Metal's reported production capacity was almost 933,000 hubcaps a year. However, at the time of the explosion, it operated 29 production lines with an estimated capacity of 1,044,000 hubcaps per year.

In the high-pressure production environment, safety suffered. Yang said at the press conference that this was one of many issues at Zhongrong Metal.

"If they had worn non-flammable, anti-static clothing, workers wouldn't have had such severe burns," he said. "In addition, these workers labored for 11 or 12 hours a day. These are all serious violations of the law."

Regulations dictated that the workshop should be cleaned after every shift. However, workers said that except for some sweeping at noon, little cleaning was done. First it happened once a week, then once a month. In busy periods, even that monthly cleaning of metal dust might be skipped.

An employee of Zhongrong Metal said that in the workshop two people standing more than 1 meter apart would be unable to see each other's faces. After a day's work, their faces would be covered with dust.

Because of the working conditions, many quit after just a few days at Zhongrong Metal. Those that stayed were mostly about 35 to 45 years old. They were people with families to support and little education who were unable to find work in the electronics sector, which favors younger and more educated workers. "None of them had it easy," a Taiwanese investor said.

Xinhua reported on August 6 that Suzhou, the city that governs Kunshan, started a large-scale investigation into the safety of companies whose production process involved metal dust. Some 214 companies were forced to temporarily suspend production due to their failure to comply with safety regulations.

The investigation has found that Kunshan authorities had been negligent in monitoring foreign investors.

"How can the Kunshan Development Zone still have such backward, poorly managed companies?" Yang said. "And how did local authorities not see this?"

The investigations have found that the reasons for the tragedy in Kunshan were not complicated. "It's just a matter of luck that this has not happened at other companies," the Taiwanese investor said.