Cai Jinyong: A Chinese Voice at the Top of IFC 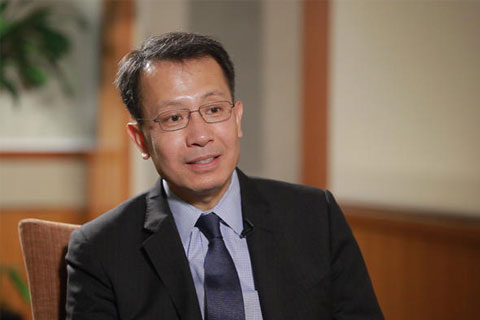 Economist Cai Jinyong became the fourth in October 2012, when he was named IFC's chief executive officer. It's a position at the Washington, D.C. -based institution that carries a four-year term. And it's a familiar environment for Cai, 55, who started his international finance career in the early 1990s by working as an investment banker for the World Bank's operations in Central Europe.

Cai marked the halfway point of his IFC tenure by sitting down with Caixin for an interview, during which he spoke about the institution's China operations and explained how he would advise Chinese companies investing overseas. He also shared his views on the country's effort to promote the yuan as an international currency.

IFC participated in shareholding reforms that were rolled out in recent years at a number of commercial banks in China. When asked about the current "mixed-ownership reform" effort, Cai said his institution does not want to compete with private players but can get involved, within limits.

The IFC is "willing to participate in areas in which it can truly offer added value," he said.

After his World Bank stint in Europe, Cai returned to China to work for what was then a new investment bank called China International Capital Corp. He spent five years at the bank, helping orchestrate makeovers at state-owned companies in several industries including the oil and telecom sectors.

Cai's next stop was a job at the U.S. investment bank Goldman Sachs, which he joined in 2000 in London before transferring to Hong Kong. Five years later, he returned Beijing to help Goldman Sachs form a joint venture on the mainland with Guohua Securities.

Cai followed a trail blazed by two Chinese executives who've also held top jobs at the World Bank, including Zhang Shengman and Lin Yifu, who worked as vice presidents at the institution.

In Cai's view, Chinese executives can serve the global institution well. "A Chinese person can be a good CEO," he said. Excerpts from his interview with Caixin follow.

Caixin: How has the World Bank changed since you worked there in the 1990s?

Cai Jinyong: At that time, capital markets had plenty of money, but developing countries did not have easy access to that money. Now it's completely different. Some African countries can get (financing) directly from the market. In terms of capital, the market is very open.

The World Bank's abilities stem from its many years of experience, combined with its capital. This is a path we want to follow closely. And it's what we want to offer our customers. These days, money is not the only issue. The World Bank and IFC together can offer developing countries US$ 50 billion. That's not very much.

What's your opinion of the internationalization of the yuan?

The yuan will definitely become internationalized. It will not only become a currency for trade settlements, but will also become a reserve currency. This will involve a process. I agree that the speed of the process will depend on domestic reforms for the capital market (in China).

Whether or not a currency is used as a reserve currency depends on whether people are confident about its value and credibility. Therefore, capital market reform is very important. This will be a crucial factor affecting the yuan's internationalization process. The capital situation in the Chinese economy is good, but we still have a long way to go.

The impetus for London is that the city government and many customers like us hope that London will become an offshore center for the yuan. We've done some yuan business in London because there were market demands. In the end, how the market develops will depend on supply and demand. It depends on how people participate. And that will determine the market's size and liquidity. We will have to wait and see.

A lot of state-owned and private companies in China are eyeing overseas investments. You've visited a lot of countries on several continents. What advice do you have for Chinese companies investing overseas?

I think it's very good that Chinese capital is going to Africa and Latin America, where there are so many projects. We've seen some successful cases as well as many problems. What I'm giving special attention to is Chinese firms, especially state-owned enterprises with a strong capacity for construction and overseas investment, should not only care about completing a construction project, but also about the project's life cycle. You should consider who will operate the project after completion, how you will get a return on the investment, and how to maintain quality and project operations for decades to come.

China plans to push forward mixed-ownership reform at the third plenum of the Communist Party's 18th Central Committee. Is the IFC interested in participating?

We are very interested in participating. We have invested a huge amount of money in China, so we often think about how we can build more value into the Chinese market. It's not only about the money we invest because the Chinese market is huge and by comparison our investment level is relatively small. What we want to bring to this market are some beneficial business models and standards based on our global experience.

Concerning today's mixed-ownership program, I think we can participate selectively because China's private enterprises and private investors are quite mature now. It's not necessary for us to compete with these partners. But we are willing to participate in places where we can really offer added value.

Do you think being Chinese helped you get appointed as IFC's chief executive in 2012?

I think that was very important. In the search for a new CEO for IFC, the World Bank's management made an important decision. They decided to look for someone in a wider area, especially in emerging countries. So everyone (at the bank) was desperately hoping to find someone from an emerging country. Not only at IFC but also at the World Bank, everyone talks about diversification, or about giving these countries a voice. I know that every one of the five candidates at that time came from developing countries.

A lot of people stress that you're the first Chinese person in this position. What do you think about that?

I'm very fortunate. I definitely realize that this comes with a responsibility. After all is said and done, this is a very important seat. I need to work very hard at this job. The most important thing I think is to realize that this is not a one-person job. Its success depends on every one of the 4,000 IFC employees all over the world.

China is already closely linked to the rest of the world. It's hard to imagine that China would not be an important participant or leader for future development. I hope China can make contributions that have a positive impact on the rest of the world. As I see it, what I can contribute in this position is to do my job well, and thus help our customers and our team feel that a Chinese person can be a good CEO.

What do you plan to do after you complete your tenure?

I hope to do something that combines commercial and public interests. I'm not confident about anything that's purely non-profit, as such endeavors are hard to sustain over the long run. I hope I can use my experience to leverage the market's power and solve some of the world economy's difficulties.

Deng Xiaoping once said development is the absolute principle. That idea impresses me very much. There are so many destabilizing factors in the world, fundamentally because of a lack of development or because imbalances or inequality trigger conflict. So economic development is the foundation for world peace.