Wal-Mart's Doug McMillon on Checking Out the Competition in China 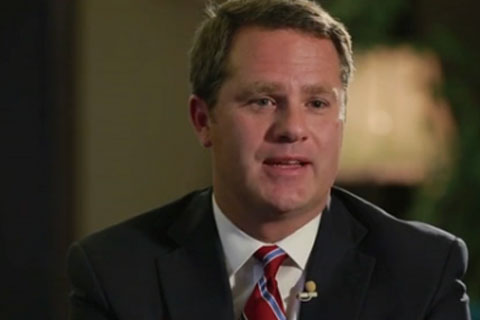 (Beijing) – Doug McMillon became president and CEO of Wal-Mart Stores Inc. in February. Every inch a "son of Wal-Mart," his origins with the company go back 30 years when he first had a summer job working in a distribution center.

When thinking of Wal-Mart, the company founded by retail legend Sam Walton in 1962, several superlatives come to mind. It is the largest chain store and private employer in the world, and is perched atop the Fortune 500. Wal-Mart entered China in 1996, and now has 401 branches all over the country, creating around 90,000 jobs.

The Chinese market has become one of Wal-Mart's main battlegrounds outside of the United States and its rivals in the country can be found in both e-commerce and in traditional physical stores.

Recently, Wal-Mart China has been hit by food-safety problems. A store in Shenzhen was found to be reusing cooking oil for a month. The company has also had problems in other countries. Two years ago, Wal-Mart suffered serious damage when it was embroiled in a bribery scandal in Mexico. In April 2012, The New York Times exposed the company's use of bribes to get licenses during its rapid expansion into the country, and Wal-Mart was promptly mired in a long and drawn-out internal investigation.

In every country he visits, McMillon does the rounds of stores, inspecting both his own and those of his competitors. Not long ago, he visited Beijing. Excerpts from an interview he gave Caixin follow.

Caixin: Where have you been during your visit to China, and do you plan to visit your competitors' branches as well as your own while you are here?

Doug McMillon: I've been to Beijing quite a few times over the years. A few months ago, I was in Shenzhen and Shanghai, and over the years I've been to other cities, including those of our competitors, where I've tried to learn about and understand customers. Yesterday, I met a mother who was shopping with her young child, and I asked her what we could do to make our store better. The first thing she talked about was e-commerce, and how she can find a better assortment online and, in one or two cases, find a better price online.

Taobao and JD.com are Wal-Mart's rivals. Have you checked out the local competition?

Sure. It's fun because wherever I am in the world I can jump on someone's website and learn more about what they're trying to sell that particular day. You may know we have a business called Yihaodian, which is a pure e-commerce company that we invested in a few years ago. We're experiencing tremendous growth with that business. A few months ago, we went to an apartment complex in Shanghai, and this complex had more than 80,000 people living there, which is just an amazing number to me. In this case, Yihaodian had innovated and created a collection center in this apartment complex. We also had delivery people who were picking up those orders, and delivering them up to the apartments. So, in some cases, we may serve customers through e-commerce sites or through collection points.

China is No. 2 for Wal-Mart's emerging market business, just behind Mexico. What are your general comments about your Chinese business?

It's already a priority market for us, but I think it's important to call out the fact that we think very long-term, and it's important to us here in China to have a very strong foundation. So we're focused on getting better every day with merchandising, with pricing, with service. And that strong foundation includes compliance. We are a company that thinks very long term.

You are going to close 25 stores next year, right?

We do close stores from time to time. We've closed stores in the United States, and last year we closed a few stores in Brazil. It's difficult to get every one of them right. We use a lot of data to help us site our stores and help us choose our locations. We use everything from population levels to spending levels. And sometimes, like in China, we've just gotten it wrong. So we just have to close as we go because those stores put pressure on the rest of the system.

So you want to maintain the size and scale of the stores you have so far?

Our stores will continue to change to be relevant in the future. Here in China, for example, we provide delivery. So if folks would rather have things delivered instead of coming into the store to shop, they can do that. In the UK, in the last few years we've been adding drive-thrus and pick-up locations to our stores, and yet the in-store shopping component is still 90 percent of our business. Customers still want stores.

Chinese customers are concerned about double standards in food security and in other things at Wal-Mart.

We have one standard around the world. Here in China, we have taken a number of steps to improve the safety and quality of the food that we offer, which is very important to us. One of the important things that we've done is to reduce the number of suppliers that we do business with, so that we can make sure we've got the highest quality suppliers. We're also investing in distribution centers. Several of them focus exclusively on fresh or perishable products. And what that enables us to do is a better job of inspection to make sure the product coming into our supply chain is of the highest quality and that it is what we ordered. We've also been using mobile labs to do more DNA testing, and we've committed to an investment over the next three years of over 300 million yuan to make sure that we're putting resources behind this very important issue.

I'm very interested by anti-corruption topics. I read in 2012, in The New York Times, about an investigation into Wal-Mart and corruption in its Mexico operations. The Times has since won the Pulitzer Prize for this story. You were the head of Wal-Mart International at the time. What has been your response, and actions, since then?

One of our core values as a company is integrity. I've been at Wal-Mart for a long time, and I'm really proud of the culture and the integrity that we have as a company. We have been investing in compliance for years now, which enables us to have the resources that enable us to live up to our values. This covers 13 different areas, including things like food safety, but also things like how to handle permits and licenses. We need to make sure that we get those permits and licenses handled in absolutely the right way in every instance.

What does the Chinese anti-corruption environment mean to Wal-Mart?

The leadership of the country is being very bold, in my view. It's encouraging that the country is willing to do what's necessary to set a very strong foundation for growth. This country has so much potential. As it relates to us, our compliance program is an area of interest, and we will continue to invest and make sure all programs are in place and functioning.

In your long career at Wal-Mart, have you encountered any crises or big challenges?

Sure, people will definitely have challenges over a period like that. I actually had my first one on my first day on the job. Actually, I rear-ended the car of my boss on my first day at Wal-Mart. So I started off a bit rocky, but he was forgiving and obviously it's worked out.