Woman Dies After Getting Trapped in Doors of Beijing Subway 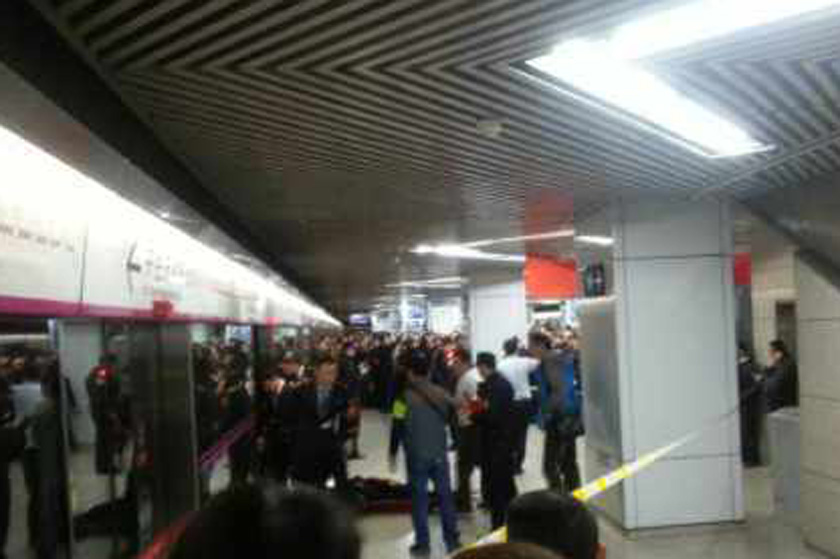 (Beijing) – A woman was killed in a Beijing subway station during peak hours after being caught between the door of a train and the safety gate on the platform on November 6.

The accident happened at around 6:57 p.m. at a station along subway Line 5 and the woman was sent to a hospital and pronounced dead at 8:20 p.m., Beijing Mass Transit Railway Operation Corp. Ltd., the operator of the line, said via Sina Weibo, the country's version of Twitter, later the same day.

A source at the subway operator, who declined to be named, said his co-workers who witnessed the incident said the woman was crushed between a train door and the safety gate and fell onto the rails after the train left.

The surveillance tapes of the train and the station at the time show that it was extremely crowded, and there were people pounding on the safety gates after they were shut, but the train still left, he said.

He said trains on Beijing's Line 5 subway only have two surveillance cameras, one in the front and the other in the rear, with both angled at the train so visibility to the side is limited.

The train has 24 doors, and "the accident is believed to have taken place on the 12th pair of doors, where it is the farthest end of sight for both cameras," so it is hard to tell how the accident happened by watching surveillance records alone, he said.

The tapes show the safety gate was opened at 7:00 p.m. Several subway workers went down the tunnel, found the woman, and transported her to a staff room in the station. Medical workers from a hospital showed up at the scene around 7:10 p.m.

A Sina Weibo user who goes by the name of Liu Jun said on his account that he was at the station when the incident happened. When the train started, he said the woman "was taken along and there were seven or eight loud sounds while she was being dragged." He said the platform was overwhelmed with people waiting for trains.

It was the second day of the Asia-Pacific Economic Cooperation meetings hosted by Beijing this year. The city and its neighboring areas have resorted to temporary measures to control air pollution and traffic which include banning about half of all cars from streets. Transportation regulators have said earlier publicly that this could add more than 1million passengers to Beijing's subway system every day.

The tragedy "should not have happened and it reflects problems in multiple aspects of how the line is managed," another source from the operator, who spoke on condition of anonymity, said.

"Neither safety gates nor train doors would jam a person because they have laser sensors and will automatically open when there are people in the way," he said. The fact that a person was caught between speaks to the demand that "there should be sensors between them as well."

The subway operator "should have given more attention to facilities maintenance instead of being obsessed with punctuality and cutting time between two trains," he said.

The accident also shows how poor the communication has been between train drivers and workers on the platform, he said. Normally both drivers and platform workers would be more cautious when working on new subway lines, but over time, "they just become negligent," he said.

He also noted that the lack of surveillance cameras on the train and in the train stations have made it difficult for investigators to examine what happened.

The Beijing government has proposed raising the fares of the subway and bus system and some experts say subways are expected to be less crowded with higher charges.