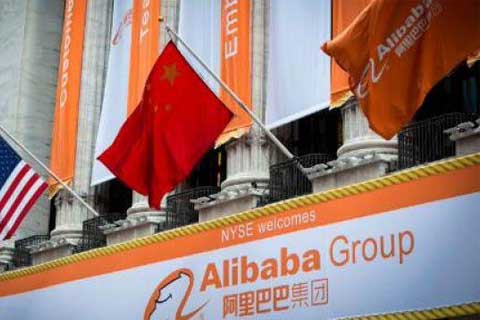 Instead they voiced concerns that the large number of sales its websites did on November 11 would overwhelm delivery companies and wondered how the company would grapple with rising sales in other countries.

Three minutes into November 12, Alibaba's headquarters in Hangzhou, the capital of the eastern province of Zhejiang, announced the tally for the previous day's sales through its shopping websites Tmall and Aliexpress. The event was attended by more than 600 Chinese and foreign journalists.

But when the figure – 57 billion yuan, 58 percent more than last year – went up on a big screen, there was no applause.

Why? The answer may have something to do with recent remarks by company executives. Jack Ma, Alibaba's chairman, said on the afternoon of November 11 he feared the huge number of sales would overwhelm delivery companies.

When asked about the high hopes many investors and analysts have for the company that had a whopper of a listing in New York in September, Ma said: "Truth being told, we are not as great (as people might think) and the expectations from outside have given us tremendous pressure."

That same day Alibaba's CEO, Lu Zhaoxi, said he underestimated the amount of orders that would be placed on the sales extravaganza Alibaba invented in 2009 and also expressed concern that the country's delivery network would be swamped.

The firm expended so much effort and resources that the management team briefly wondered whether it should cancel the promotion, said Zhang Yong, Tmall's chief operating officer. It decided to carry on if only to see how well e-sellers, warehouse management, the payment system and delivery companies fared, he said.

As of 3 p.m. on November 11, the number of packages to be delivered for sales through Tmall had reached 187 million, compared with 167 for the whole day last year, said Tong Wenhong, CEO of Cainiao Internet Technology Ltd., the delivery arm Alibaba founded in 2013.

Cainiao collected data from more than 50,000 delivery outlets and 657 logistics centers. "So far the number of packages has exceeded the capacity of the country's delivery system," Tong said.

China Post, the state-owned postal and delivery services provider, had predicted that the number of packages would reach 500 million nationwide. The result was 15 percent higher than that.

Alibaba is also trying to grapple with problems it never encountered before. It included Aliexpress.com, a multi-language shopping site aimed at foreign buyers, in this year's November 11 promotions for the first time, but for only eight hours starting at 4 p.m. Beijing time.

This was the first time Alibaba had to consider the difference between time zones, Zhang said, and inexperience on this front explains why Aliexpress was not on board for longer.

Alibaba did not say how much of its total sales came from overseas buyers. Its data show that sellers and buyers from more than 150 countries and regions were active on Tmall in the first 38 minutes after promotions began, and Hong Kong and the United States ranked second and third after the mainland market. When Aliexpress joined in, Russia passed Hong Kong as the largest overseas market.

Wu Qian, director of Alibaba's international business, said Aliexpress is Russia's largest e-shopping website despite a major setback last year. The website held its first big sales event in Russia in April 2013 and the country's state-run delivery system was not up to the task, she said.

"It took three months for our first package to reach its destination, and there were people marching on the streets demanding answers for why their postal service is that awful," Wu said.

Sales in Brazil and Indonesia have also shot up this year, Wu said, but complementary services have struggled to keep pace.

A Chinese e-shopper in Britain said Alibaba may need to cater its promotions differently in some markets if it wants to get people's attention. On November 11, "all of my colleagues are celebrating the ending of the World War I," the shopper said.