Clearing the Air with a Sino-U.S. Climate Pact 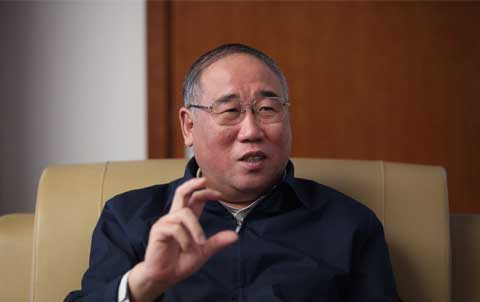 (Beijing) – A long-anticipated, Sino-U.S. agreement aimed at curbing greenhouse-gas emissions was announced on November 12 at the Asia-Pacific Economic Cooperation meeting in Beijing.

The deal marked a surprise turn toward compromise for the world's largest economies – and largest greenhouse-gas emitters – after two decades of sometimes acrimonious discussions.

"China intends to achieve the peaking of CO2 emissions around 2030, and to make best efforts to peak early, and intends to increase the share of non-fossil fuels in primary energy consumption to around 20 percent by 2030."

According to U.S. Secretary of State John Kerry, the two countries have been "leaders of opposing camps in climate negotiations" for some 20 years. But now they have "come together to find common ground, determined to make lasting progress on an unprecedented global challenge."

Before joining NDRC, the 65-year-old Xie was in charge of a government agency overseeing environmental protection regulations. He held that post between 1993 and 2005, spearheading several nationwide anti-pollution campaigns.

In an exclusive interview with Caixin on November 15, Xie offered his take on the Sino-U.S. climate pact. His comments came as the Chinese government is under mounting pressure to combat air pollution, and world leaders are gearing up for a fresh round of global climate talks in Europe.

Xie expects the pact's latest emissions goals for China will give Beijing authorities a new springboard to push reform projects.

The following are excerpts from the interview.

Caixin: The Sino-U.S. climate agreement has won widespread acclaim. Can you tell us more about the negotiations?

Xie Zhenhua: The two countries had been preparing to issue (an agreement) for awhile. In late September, Vice Premier Zhang Gaoli participated in a UN Climate Summit and met President Barack Obama, delivering two messages on behalf of President Xi Jinping. One was an invitation asking President Obama to visit China for the APEC meeting. The second was a call to enhance cooperation on climate change issues and set goals for action beyond the year 2020.

The two countries have had a clear understanding from the beginning and have worked together to help each other reach targets. Teams from both sides have had many opportunities to communicate. They've made contact via telephone and video calls, and at face-to-face meetings, in order to settle several key issues. The final statement was fixed in stone on the day of the announcement.

In the statement, China and the U.S. made it clear that we are looking forward to an agreement being reached at the 2015 Climate Change Conference in Paris. China shall make contributions to help reach the agreement and it should be a fair one reflecting different countries' distinct responsibilities and capacities.

The China-U.S. joint agreement is a win-win result because it highlights a new kind of relationship between the two major countries, playing an historic role in pushing forward a global response to climate change.

The negotiations included not only technical discussions about climate issues but, to some extent, they were also political discussions with decisions that had to be approved by top leaders. How did the top leaders from the two countries negotiate?

Top leaders from both sides attached great importance to the issue. They personally followed the issue and pushed for progress by seeking consensus.

You mentioned the agreement was well-timed because it was released during the APEC meeting. With the 2014 Climate Change Conference in Lima approaching, and an agreement expected at the 2015 conference in Paris, are China and the United States trying to influence international negotiations?

At the UN Climate Summit in September, Vice Premier Zhang Gaoli delivered a speech saying China supports and is willing to contribute toward concluding an international agreement on climate change by 2015. But the agreement should be fair and based on the principle of common but differentiated responsibilities.

The vice premier outlined China's targets for fighting climate change by 2020. These had to do with reducing carbon intensity, increasing non-fossil fuel energy consumption levels, increasing total forest area, and seeking to cut carbon emissions as soon as possible.

Zhang's speech clearly voiced the opinions of China's leadership regarding multilateral climate change negotiations beyond 2020. And this time, in the joint agreement with the United States, China set two quantitative goals.

Will more detailed goals be released next year?

Yes, more will be released as required and according to the progress of multilateral negotiations. There will be blanket targets, marking China's entry into a period of development with low-carbon emissions.

What impact will the China-U.S joint agreement bring to the global, multilateral climate change negotiations?

Countries are required to propose individual targets by the first quarter of next year. China and United States have thus announced (their goals) in advance. Actually, the European Union made its announcement even earlier. That's good news for the multilateral talks.

What are your expectations for the Lima Climate Change Conference and the 2015 conference in Paris?

The Lima conference will be crucial because it will determine the results of next year's meeting in Paris. It lays the groundwork for an agreement expected to be reached next year. Lima conference (participants) need to work out a preliminary consensus on the framework, principles, factors and key issues for the agreement. There will be a lot of disagreements that will be left waiting to be resolved, one by one, at the Paris meeting. I think the Lima meeting will see a lot of disputes. And every country will try to inject its opinion in the draft agreement.

Before the Paris meeting, countries will resolve disagreements through negotiations and draft a tidy agreement next year.

Some experts say China has set an emissions reduction target for 2030 that's quite high and that it may be difficult to reach under the current development model. What's your opinion?

The central government has made it clear that a mechanism will be set to push reform through emissions reduction efforts by promoting adjustments to the economic structure, and by improving the quality and efficiency of economic growth.

President Xi Jinping said recently that reducing emissions is not a task that we should do when others demand it, but according to our own needs. We should use emissions cuts to promote the country's transformation to a greener growth model. The targets we set should serve this purpose.

To promote reform, there should also be supportive institutional arrangements and reform measures. First, the state should issue policies to encourage efficient energy use for industry, construction, transportation and even in the home. Policies should especially let the market play the key role in allocating resources.

Second, policies should be issued to encourage and support the development of renewable energy sources to increase non-fossil fuel energy consumption.