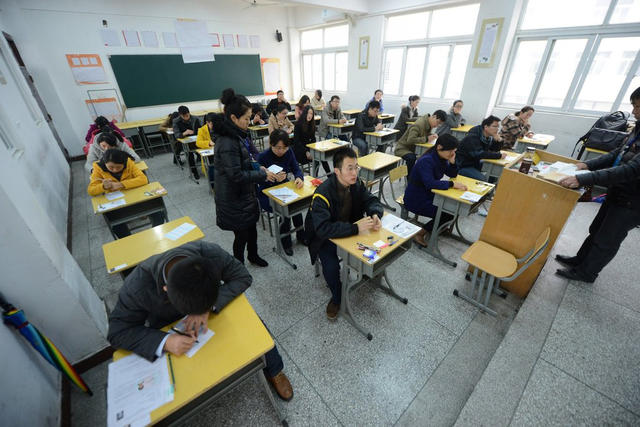 (Beijing) – More than one-third of the people who signed up to take the test to become a civil servant next year did not show up for the exam on November 30, a sign that interest in a government career may be ebbing

The low turnout came as government agencies made more jobs available for candidates. A record 22,000 positions were made available, 3,000 more than last year.

The State Administration of Civil Service said 1.4 million candidates signed up to take the test it administers, 110,000 less than last year. About 510,000 people signed up for the exam, but did not attend.

This eases the competition for the usually highly sought-after jobs with the Chinese government. In 2010, 59 people took the test for every open position, but this year the ratio was 40-1, the lowest in nine years.

The most desired job next year is with a procurement center affiliated with the National Government Offices Administration. It has attracted 2,625 candidates; last year the figure was 9,470.

Some analysts attributed the decline in interest to the central government's efforts to fight corruption, making the jobs less appealing. Others argued that it could have something to do with the introduction of stricter qualifications during the screening stage. In the past, recent college graduates have been infatuated with working for the government because of the job security and handsome benefits the positions offer.

A job in the civil service has lost its appeal among people who were born in the 1990s, surveys by Offcn, a private agency providing courses for candidates, and Horizon Research Consultancy Group, show.

Yao Shujie, head of the School of Contemporary Chinese Studies at the University of Nottingham, in England, wrote in a blog for Caixin that said even as interest in government jobs is ebbing, competition is still intense, underscoring how distorted social development in the country is.

Too many talented people are trying to get into the civil service at the expense of the development of the real economy, entrepreneurship and innovation, he said.

"In a healthy society, there should be no difference between civil servants and people working in other sectors, which makes civil service recruitment exams unnecessary," he said. "China will truly make progress and become a great country the day we see off the exams."