Tencent Aims to Cash In on Its Hit Messaging App 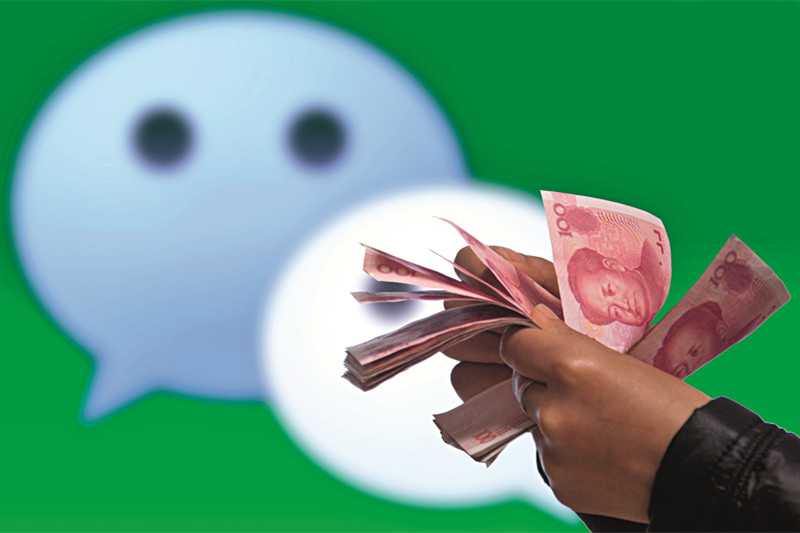 (Beijing) – Tencent Holdings Ltd.'s popular messaging application WeChat, or Weixin, has been a mobile phone miracle. Since its launch in January 2011, the voice and text chat application has attracted more than 500 million users. And Tencent wants more.

In late 2013, the company proposed a "connect everything" strategy for WeChat. Under the plan, Tencent wants to make WeChat a platform that connects people, businesses, services and many other entities to make it an integrated online community offering information, entertainment, financial and business services, and various other options for users.

Now the people running the app want to attract a large number of online merchants to join its platform. In September, WeChat unveiled a plan named Smart Life that is aimed at providing ways for businesses to better engage with consumers through their WeChat accounts. Planned features include ways to order food, book hotels, buy public transportation tickets, pay tuition fees, make doctor appointments and more.

WeChat's management has held a number of public lectures across the country to promote the Smart Life solutions.

"It is an approach to cultivate (potential) offline (users)," said Geng Zhijun, head of WeChat's offline promotion team. "It is also a process for us to collect opinions from businesses and send them to our product development team for revisions."

For a long time, WeChat has been seen as moving slowly into the e-commerce arena. Executives, led by Zhang Xiaolong, founder of WeChat and the president of Weixin Group, have at times expressed concern that commercial activities on the platform may hurt the user experience. Since the app's launch, the WeChat team has launched measures to limit excessive marketing and advertising on its platform.

Now, some industry experts say, WeChat may have started to change its attitude.

Many companies like Vdian and Koudaitong, which help small merchants develop online stores mainly through social networking, have connected their services into the WeChat platform. They have become an increasingly important segment of a business chain that WeChat is building to connect online consumers and offline businesses.

Time is limited for WeChat because major competitors like Alibaba Group and Baidu Inc. are also flexing their muscles for the battle in the mobile phone-based world of commerce. Meanwhile, investors and businesses are wondering whether the technician-led WeChat team, which has been widely criticized for lacking flexibility in market operations, can really adapt to the changes.

Industry experts say the launch of the Smart Life plan is the start of WeChat's commercialization efforts, but merchants have stayed on the sidelines so far. Most of them are curious to see when real change will come about.

In September 2013, Tencent started its WeLife, or Micro Life, project. The team, led by Geng Zhijun, was designed to build a link between life service providers and real stores on Tencent's mobile platforms.

However, the project did not go smoothly. While Geng's WeLife team aggressively promoted the services among bricks and mortar stores, Zhang and the WeChat team were very selective in allowing ads on the app.

"Many people thought it was a WeChat promotion and were quite excited, but later they found out it had nothing to do with WeChat," the owner of a beauty shop said.

Vendors who joined WeLife later found they had access to very limited services.

"The WeLife and WeChat teams were not well connected," another vendor said. "They had different thoughts about business solutions and WeLife didn't get access (to WeChat)."

Then in May, Tencent decided to change its structure and made WeChat an independent business division. WeLife, which reportedly had 80 million registered business users in 40 cities, was merged into WeChat, and Geng was named head of WeChat's business development department.

Also merged into WeChat in the reshuffle was the WeChat payment team, which had been under Tenpay.

The debut of WeChat Wallet was crucial, said Wu Yi, head of the WeChat payment operation. "The payment service enables a complete business circle for both e-commerce players and offline businesses. Otherwise, it is only advertisements."

Indeed, the launch of WeChat Wallet soon prompted Jack Ma, chairman of Tencent's big rival, Alibaba which operates the payment service Alipay, to respond to the new competitor. Alibaba launched an aggressive marketing campaign supporting its messaging app Laiwang in the hopes of competing with WeChat.

Several months later, WeChat Wallet had sudden success through a small product it offered during the Spring Festival holiday. Five days before the holiday, WeChat launched a virtual "hongbao," or red envelope full of cash, service based on its payment function. This allowed users to send a virtual hongbao as a traditional Chinese gift to their friends, and users loved it.

More than 8 million people used the service during the holiday, Tencent's data showed. The total number of hongbao received topped 40 million and some 400 million yuan was involved.

Thanks to the hongbao service, WeChat Wallet had its service linked to millions of bank accounts in just a few days.

The unexpected success offered a glimpse of the huge potential of the payment service to the WeChat team, even though they had not even designed ways for users to spend the money they received as gifts, so it just went to bank accounts.

"The hongbao was only one scenario," Wu said. "Our idea is to develop more scenarios for WeChat Wallet."

In September, WeChat added a new quick payment feature to WeChat Wallet, allowing users to make payments from it or a debit card by scanning a quick respond code shown on their mobile phone. Now, nine retailers including Dairy Queen ice cream shops and Haolinju grocery stores have signed on to accept such payments.

WeChat has also taken steps to widen the access to its platform by abolishing the 20,000 yuan deposit required for merchants to connect with WeChat and allowing more e-commerce operators to access its payment service.

But some vendors are still annoyed by the complicated procedures needed to join WeChat.

"Seventeen documents are required for connecting to the payment service," the beauty shop owner said.

The more challenging task for WeChat is to cultivate the potential clients among the offline vendors. Since May, the WeChat team has travelled around the country to deliver presentations to vendors on ways to do business on the Internet and WeChat.

"Offline businesses have totally different rules and Internet is quite mysterious to them," Wu said.

One business model WeChat has outlined for vendors is the offering of coupons to customers visiting stores, meaning customers must make payments through WeChat to get the discount. If the payment is completed, the customers' data will be saved so vendors can make future marketing plans.

Stores want their partnerships with WeChat to generate more foot traffic, but the effects may be limited. At a store launched in the eastern city of Hangzhou by WeChat and Shopin, a retailer of discount brands, a reporter found very few customers visited the store due its poor location.

As part of the Smart Life solutions, WeChat linked its platform to the two hotel chains Chatinn and Podinns, allowing users to make reservations and order room service through the app.

Podinns has also partnered with Alipay and Baidu's online map service. Zhang Wei, deputy general manager of Podinns, said that the company likes each for a different reason: WeChat for the social networking, Alipay for the payment potential and Baidu Maps for navigation.

Zhang said WeChat generates a lower percentage of deals than tourism websites do, but the marketing costs are lower. Thus, the company usually uses WeChat to promote new products.

In the catering sector, hotpot chain Haidilao Hot Pot became the first restaurant to accept payments through WeChat. "WeChat payment is the largest payment source on mobile devices and accounts for 20 percent of the total payments (that Haidilao received)," said Feng Hailong, the eatery's head of information technology.

Shortly after partnering with WeChat, Haidilao was approached by Alipay and agreed to a deal with it, Feng said.

Fierce competition has also erupted in the healthcare industry. In July, Alipay unveiled a project called Future Hospital that plans to embed everything from making an appointment, paying a hospital and checking test results in its mobile app. The project was launched in partnership with Guangzhou Women and Children Medical Center. Within a month, WeChat launched its version, called Smart Hospital, with Guangdong Women and Children Hospital.

As of October, WeChat said it was working on deals with more than 100 hospitals. Alibaba said it is talking with a similar number and has deals with 15.

In August 2013, WeChat tied its payment service to Yixun.com, Tencent's shopping website, but sales have been flagging. Then early this year, Tencent sold Yixun.com to the e-commerce giant JD.com, granting the latter access to WeChat.

After rounds of bargaining over design and accessibility, JD.com's products and services were offered on WeChat in late May in preparation for JD.com's annual sales day on June 18.

It is unclear what WeChat's contribution to JD.com's sales have been. The latter's financial report shows that in the second quarter, 24 percent of its total orders came from mobile devices, up 6 percent from the previous quarter. However, Liu Qiangdong, the CEO of JD.com, said most of the mobile orders came from the company' app.

A source from JD said it is still researching the buying habits of WeChat users, something it believes is very different from those of PC users. Most of the shoppers coming from WeChat are new users with distinct purchasing preferences, the source said.

While merchants are looking at WeChat as a new marketing front, WeChat's Wu emphasized it "is not a marketing tool."

Despite this, the earliest business on WeChat has been Alibaba vendors using the app to market their shops. They promote products on WeChat, then direct buyers to Alipay to make final payment.

This spurred WeChat to close accounts that were doing what it deemed excessive marketing in July 2013. Shortly afterward, Alibaba cut ties between WeChat users and Taobao and Alipay.

The conflict between WeChat and Alibaba has hurt many online vendors. A seller of suitcases on Taobao said the battle between the two Internet giants hurt his plan for mobile marketing, resulting in the loss of hundreds of thousands of yuan.

But the vendor has stayed on WeChat and said he has figured out how to business on the app. "Although it leads to fewer real deals, the marketing costs are very low. It suits small vendors who use it for brand promotion."